The New Largest Telescope in the World 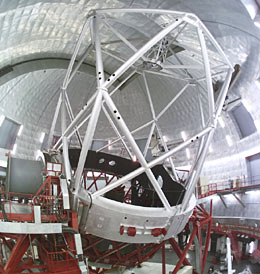 The GranTeCan telescope (seen here without its mirrors) rests on an altazimuth mounting, like all modern giant scopes. The last "world's largest telescope" to be built with an equatorial mounting — that is, relying on mechanics rather than computing to track the motion of the sky — was the Hale 200-inch (5-meter) reflector on Palomar Mountain, completed in 1948. Click image for larger view.

Move over, Keck! A new telescope in the Canary Islands is about to become the world's largest. During a first-light ceremony on July 13th attended by Spain's Prince Felipe, engineers successfully aimed the Gran Telescopio Canarias (GTC or GranTeCan) at Polaris and at a distant pair of starburst galaxies. The event marks the start of a year-long period of commissioning and testing. Regular science observations should begin in mid-2008.

At present, only 12 of the telescope's planned 36 mirror segments are in place. The 1.9-meter hexagonal segments are slightly larger than the 36 mirror segments of the twin Keck I and II telescopes on Mauna Kea, Hawaii. As a result, the light-collecting area of the Spanish monster scope will be equivalent to that of a single 10.4-meter mirror — a 4% increase in diameter over Keck. 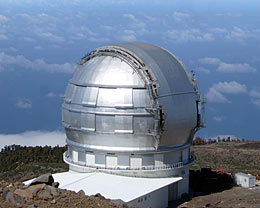 However, since the GTC is a single instrument, it lacks the interferometric capabilities of the Keck Observatory pair or the quartet of 8.2-meter telescopes making up Europe's Very Large Telescope in Chile. (The special-design Hobby-Eberly Telescope in Texas and the similar SALT Telescope in South Africa are often listed as having mirrors 11 meters wide, but only parts of their mirrors direct light to the focus at once.)

The Gran Telescopio Canarias sits just below the rim of the Caldera de Taburiente, the steep, dormant volcano on the island of La Palma off the coast of Morocco. This is the site of Europe's Observatorio del Roque de los Muchachos, which has been expanding for several decades. The observatory is already home to the British/Dutch/Spanish 4.2-meter William Herschel Telescope, the Italian 3.6-meter Telescopio Nazionale Galileo, the MAGIC cosmic-ray telescope, and a host of smaller instruments. 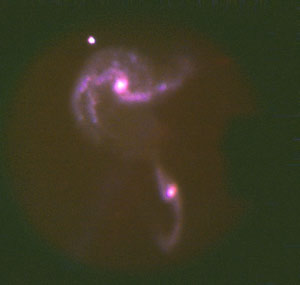 They may not look like much here, but the distant star-forming galaxy UGC 10923 and its companion will go down in history as sitting for the first portrait by the GTC.

Construction of the GTC and its 35-meter-diameter dome cost 130 million euros and took seven years. It was hampered by planning problems, cost overruns, and the difficulty of accessing the 2,400-meter-altitude site.

Spain (to which the Canary Islands belong) is the 90% partner in the GTC Project. Three Mexican institutes are minor partners, as is the University of Florida at Gainesville, where engineers have developed a mid-infrared camera called CanariCam. Major research areas for the new telescope will be cosmology and the search for extrasolar planets.

Someone should tell astronomers it's not the size of your aperature that matters, it's what you do with it!

And, will the user community be as talented as those using VLT and Keck, and can we expect to see the same level of scientific productivity?

The cost to complete the Keck I telescope in 1993 was only $72 million dollars. For the extra $50 million, I guess Spain deserves the (4%) bragging rights.