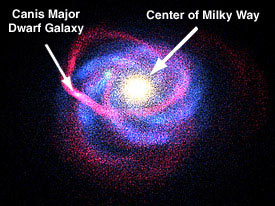 Tidal forces exerted by the Milky Way's gravity are slowly dismembering the Canis Major dwarf galaxy. The stars pulled from the dwarf over the past billion years form a looping ring around the Milky Way in this computer simulation. Click for .mpg animation.

An international team of astronomers has discovered a new dwarf galaxy that is being tidally shredded and devoured by our Milky Way. Moreover, the dwarf, centered in Canis Major, lies even closer to the galactic center — and to us — than any galaxy previously known.

The Canis Major dwarf went undetected until now for two reasons. First, at visible wavelengths it is largely hidden behind gas and dust near the plane of the Milky Way. Second, it is quite sparse, with its stars appearing mixed together with their Milky Way counterparts.

The team of five astronomers found the dwarf galaxy by sifting through data on millions of stars collected by the Two Micron All Sky Survey (2MASS), which recently surveyed the entire sky at three near-infrared wavelengths with 1.3-meter telescopes in Arizona and Chile. The discovery team noticed an overdensity of M giants, red-giant stars that are bright at infrared wavelengths, at a distance of about 25,000 light-years in the general area of Canis Major. Astronomers can measure the distances to M giants fairly accurately because those of a given infrared color have nearly the same luminosity. The team has since detected other types of stars that belong to the Canis Major dwarf.

Both the Canis Major and Sagittarius dwarfs are being pulled apart by the much more massive Milky Way, whose gravity is tidally extending both galaxies into long streams of stars. In addition, the orbits of the two dwarfs are decaying as they plow through the Milky Way's halo of stars and dark matter. The stars of both galaxies are gradually being incorporated into the Milky Way, and eventually the individuals will lose their status as independent entities. Computer simulations (like the one above) suggest that the Canis Major dwarf has been losing streams of stars while looping around the Milky Way several times in the last billion years.

The discovery of a second tidally disrupted dwarf galaxy bolsters the emerging consensus that large galaxies such as the Milky Way grow by ingesting their smaller brethren. "This is an important discovery because it highlights that the Milky Way is not in its middle age — it is still forming," says Geraint Lewis (University of Sydney, Australia), a member of the discovery team.

"If we are correct about our interpretation of this object as a building block of the Galactic disk, there must be other dwarf galaxy remnants in the Milky Way," adds team member Rodrigo Ibata (Strasbourg Observatory, France), who codiscovered the Sagittarius dwarf. "However, these may be in a very advanced state of disruption and are probably smeared all around us in such a way as to render them very difficult to identify."

The discovery may also resolve the origin of a ring of stars around the Milky Way. This ring, discovered in 2002 in Sloan Digital Sky Survey data, appears to encircle the entire disk of the Milky Way 60,000 light-years from its center. Unlike the Sagittarius dwarf galaxy, which is moving nearly perpendicular to the Milky Way’s disk, the Canis Major dwarf galaxy and the ring are moving nearly in the same plane as the disk. "I hope that the discovery team is correct that this is the dwarf galaxy responsible for the ring," says Heidi Jo Newberg (Rensselaer Polytechnic Institute), a member of the team that discovered the ring. "That would be a great confirmation of our prediction that the ring was caused by the disruption of a dwarf galaxy."

The Canis Major dwarf appears to contain about 1 billion solar masses and is thus adding nearly 1 percent to the mass of the Milky Way. "The number of M giants that we observe today in the remnants of the Sagittarius and Canis Major dwarfs are essentially identical, so we think these two objects have very similar masses nowadays," says Ibata. "We hope to be able to calculate the pre-disruption mass of the Canis Major dwarf, but this will require a detailed study that has not yet been done."