The Source of the Dinosaurs' Asteroid

I've been fascinated by dinosaurs ever since I was a young schoolboy. Later, after I'd fallen in love with astronomy, I was thrilled to learn that the giant reptiles were actually related to the stars — through the cosmic impact that rendered them extinct 65 million years ago. Little wonder then that I'm excited about a paper in this week's Nature, in which a trio of dynamicists argue that the deadly impact resulted from a titanic collision out beyond Mars.

Here's their story in a nutshell. Some 160 million years ago, an asteroid roughly 110 miles (170 km) across was blown to smithereens by a collision with a smaller body. The result: hundreds of thousands of mountain-size fragments, a few hundred of which were at least 6 miles (10 km) in diameter. The largest remaining lump, now known as 298 Baptistina, is 30 miles across and today occupies a stable orbit in the inner asteroid belt. But after the smashup some of the collisional shards leaked into the inner solar system through orbital resonances with Mars and Jupiter, causing a prolonged asteroid shower that peaked between 100 and 50 million years ago. Exit dinosaurs. 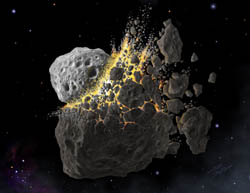 To make their case, William F. Bottke, David Vokrouhlický, and David Nesvorný (Southwest Research Institute) ran computer simulations that tracked the Baptistina "family" (about 3,000 asteroids with similar orbits) back through time. They discovered that subtle orbit-shifting processes known as the Yarkovsky and YORP effects eventually forced many of the fragments into a nearby orbital resonance with Mars, which in turn ejected them from the main belt.

What's more, members of the Baptistina family appear to be compositional matches to carbonaceous chondrite meteorites, which are uncommon. Chromium concentrations in 65-million-year-old sediment layers on Earth suggest that the dinosaur-killing impactor belonged to the same rare group. "Everything fell into place," says Bottke. The team claims there's at least a 90% probability that the mass extinction at the end of the Cretaceous period was caused by the Baptistina asteroid shower. 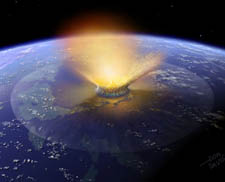 A team of scientists has proposed that a large fragment from the Baptistina breakup eventually slammed into Earth 65 million years ago, triggering a global biological catastrophe.Click on image for a larger version.

Geologist Jan Smit (Free University of Amsterdam, the Netherlands), an expert on the 110-mile-wide Chicxulub crater that led to the dinosaurs' demise, is excited about the Nature paper. "We've always wondered why we haven't found evidence for other 10-km impacts in the past 500 million years," he says. "This is a very elegant explanation." Indeed, Bottke and his colleagues argue, if there were no catastrophic asteroid collisions, strikes from Chicxulub-size objects across would on average occur only once every 350 million years or so.

According to Richard P. Binzel (Massachusetts Institute of Technology), the new result addresses "the essence of the problem" of getting asteroids into Earth-crossing orbits. "We're interested in the mechanisms that can deliver bodies to the vicinity of the Earth," Binzel explains. "So we need to know what role sudden collisions play as compared to slow orbital drift." Bottke estimates that fully 20% of the current population of near-Earth asteroids are leftovers from the Baptistina collision. "We're still in the tail of the asteroid shower," he says.

What about other impact targets in the inner solar system? The prominent lunar crater Tycho, only 109 million years old, might also have been gouged out by a Baptistina renegade. But Bottke warns that we know nothing about the composition of the Tycho impactor. On Venus, the large craters Mead, Isabella, Meitner, and Klenova are possible suspects — at least one of these was probably caused by the asteroid shower — but exact ages for these impact structures are not known.

Anyway, if Bottke, Vokrouhlický, and Nesvorný are right, the cosmic collision that produced Baptistina and its siblings also paved the way for mammals and, ultimately, humans. It's a fascinating thought — makes me feel like that young schoolboy again.

You may want to think like a kid again, but this mathematical model does not incorporate the fossil record
or any other paleontological information and quantifying this theory at a 90% probability is pretty childish.Someone
is watching too many of the children's shows that show the
fireballs reducing the living dinosaurs into cinders. I wonder why the flowering plants and fresh water snails etc.
continued on. I do not think of balls of fire being so selective.

Is there any group or individual that would be interested in checking out a possible impact site? I know of a hole in the ground about 1km in diameter, about .5km deep, with upraised edges and a flat bottom. Check this out:

Anyone want to get together and rope down to the bottom and look for shocked quartz?

The impact theory is a plausible explanation of the demise of the dinosaurs, and much evdence supports it. However its almost uncritgical acceptance by the Astronomical community has made me queasy since the original paper by Luis Alvarez. The Paleontological community, while not dismissing the impact theory, has however been more receptive to other explanations--climate change, evolutionary replacement of plants by new species (flowering plants) leading to ecological changes, The massive release of magma and volcanic gases in the Deccan Flats of India to name a few. Allevents less dramatic and/or catastrophic than an asteroid strike, but that nonetheless might have had role in the extinction. Keep in mind that dinosaurs were on the decline already when the Chicxulub impact occured. My point is not to support or debunk any of the above referenced ideas, but to caution against a too blind ACCEPTnce of a single "magic bullet" type theory. Birds, mammals and crocodilians survived the KT event, any catastrophic theory has to account for this---especially the crocodillians.My other worry is that the impact theory might also serve for some the same psychological need that creationism serves for others, perhaps the acceptance of the impact theory by its more enthusiastic adherants serves for them the purpose that creationism serves for religious fundamentalists.

The fossil record shows that dinosaurs, and life in the sea survived for well over 100 million years through conditions that were just as variable and inhospitable (if not more so) than those leading up to their extinction. The Deccan traps (on top of the Reunion hot spot magma plume) were erupting prior to the 65 million year old KT boundary. However, the eruption rapidly increased and went in to its most violent phase and poured out the vast majority of its lava right at and immediately after 65 million years ago, just when the proposed impact occurred. At the time of the Chicxulub impact, the Deccan traps just happened to be near the Chicxulub antipode. And still another possible impact area, the proposed Shiva undersea crater (a monster) just adjacent to the Deccan trap area and also dating to 65 million years ago has been identified. Other impact areas of 65 million years of age have been tentatively identified but need independent confirmation and scientific scrutiny.

Paleontologists such as Dr. Bob Baker, a very intelligent if not outspoken scientist and popular TV personality have in the past severely criticized an impact hypotheses and proposed (among other theories) that the dinosaurs went extinct because two land masses came together around 65 million years ago and allowed a dinosaur to cross from one continent to another and spread a dinosaur plague (by sneezing on another dinosaur perhaps) that somehow managed to wipe out all dinosaurs. He failed to explain how this plague managed to also wipe out much of the ocean species as well. A character much like Dr. Baker was attacked and eaten in the 2’nd Jurassic Park movie, a coincidence? But seriously, evidence from the fossil record does show a gradual reduction in species diversity both on the land and in the oceans beginning millions of years in advance of the KT boundary 65 million years ago. The Deccan traps seem to coincide with this as well does the increase in abundance in angiosperms (flowering plants including a significant increase in the abundance and distribution of grass species). However, the Chicxulub impact theory posed by the Alvarez team has been up against the harshest scrutiny by the scientific community for over 25 years. The vast preponderance of the research to date has only strengthened their theory and so it justifiably continues to be the best explanation for the demise of the dinosaurs, other land animals and a vast extinction in the oceans as well

Boyd has elaborated in his posts on the relationship between the Chixculub event and other events happening in the 65 mya timeframe, this shows that Boyd is an excellent thinker and writer because in his posts he has accomplished what many writers on this topic have not, i.e related the Chixculub event to those other events and processes going on at the same time. This type of situational analysis of these events and processes is something I would like to see in the literature, perhaps with astronomers, geologists, paleontologists and botanists collaborating on a multidisciplinary approach to this topic. Comparative studies of the fossil record at different distances from the Chixculub and proposed Shiva impact sites as well as the Deccan Traps would be EXTREMELY interesting---especially if we could get good time resolution in the rock layers. This would certainly be more interesting than the WHAM-BANG Gee-Whiz approach many science popularizers so easily fall into when discussing this topic Much Thanks again to Boyd for two great posts!!!

Very well written Enrico. We all too often fall into the
trap of thinking simple answers that conflict with too
much of the data can resolve complex interelated environmental problems. There is a movement in the scientific and pop culture communities to apply a theory or
belief in a manner that religion supplies to it adherents.
Boyd has many good points in his posts,but the vast amount of data does not support the impact theory. Most of the paleontological and geochemical evidence still needs to be explained away. It is way too premature for the proponents of this position to be advertising it on TV and educational
literature as scientific fact. I just think that theories should have to hold up to the same degree of scrutiny in
astronomy as they do in the other scientific disciplines.
I am also thankful that Sky and Telescope allows this
opportunity to their readers to read and voice their opinions!

Thanks Richard.
Regardless of the truth or falsity of the impact theory, it has acheived the status of "dogma" in some circles of the scientific community, and has become very fashionalvble in pop culture. This may limit scientific inquiry.