The Spin's the Thing

For black holes, going with the flow might make you stand out more. A recent paper by Alexander Tchekhovskoy (Princeton) and Jonathan McKinney (Stanford) suggests that a black hole gobbling infalling gas and dust will spit out a slightly more powerful jet if it spins the same direction as the disk of material it’s eating. The result, part of a larger effort to understand jets’ maximum energies, adds to an ongoing debate among astronomers over whether spin direction — and which direction — affects the outflow's power. 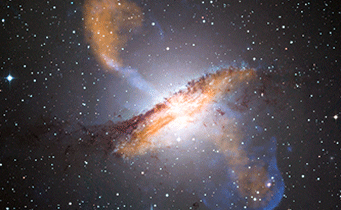 A supermassive black hole is thought to be responsible for the gigantic jets shooting out of the Centaurus A galaxy. Astronomers are treading cautiously in their quest to understand what goes in to making the most powerful jets.

Astronomers already knew that a faster spin causes a more powerful jet, a conclusion borne out by recent observations, Tchekhovskoy explains. That’s because jets can steal energy from a spinning beast, and a larger spin has more energy. Tchekhovskoy and his colleagues found last year that a jet outflow can actually put out more energy than is available from the disk of material feeding it (remember, mass is energy, as Einstein famously showed). That energy comes from the black hole's spin.

“Imagine you invest $100 worth of mass-energy into a black hole and $20 worth of energy comes out in the form of the jets,” Tchekhovskoy explains. “This means that jet efficiency is 20%.” In the new study, for a black hole spinning the same way (prograde) as the disk, “we put in $100 and $105 comes back out — efficiency is 105%.” A black hole spinning the same rate but in the opposite direction only produced $38 — that is, it converted the accreting mass into the jet with 38% efficiency.

While the prograde spin produced a jet a few times more powerful than the black hole spinning backward, or retrograde, the difference is probably not enough to allow astronomers to easily distinguish between the two systems in observations, the team concluded.

What’s different about the new study is the type of system the astrophysicists looked at, says Daniel Evans (Harvard-Smithsonian Center for Astrophysics), who in 2010 collaborated on work that suggested retrograde spins, not prograde ones, would cause more powerful jets. “This is a very important paper,” he says, because Tchekhovskoy and McKinney were able to look at a puffed-up disk flooded with magnetic fields, extremes previous simulations have not reached but that may be closer to black holes’ natural environments. 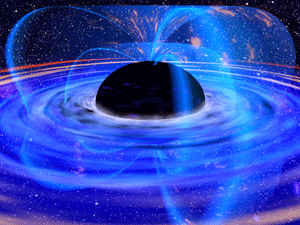 Black holes don't always swallow magnetic fields entirely. Sometimes, the loops stretch above and below the event horizon, seen here in this highly stylized illustration. But black holes may be able to swallow more loops when they spin the same way as their disks.

The standard idea of black holes is that nothing comes out. That’s a bit oversimplified. A black hole eating a magnetic field may not actually eat the whole thing, instead leaving part dangling from its mouth. Magnetic fields are like loops — no matter how small the pieces are that you cut a bar magnet into, each piece still has a north and south pole. A black hole can swallow a whole loop, like a Cheerio. But it can also swallow only part of it. In this case the black hole is more like an olive threaded on a loop of spaghetti. The magnetic field line (the spaghetti) “can go down all the way through the pole of the event horizon, pass through the black hole, and come out on the other side,” Tchekhovskoy says. “That’s the beauty of magnetic fields.” It is these field lines threaded through the black hole that funnel the jets out.

For a black hole stuffed with as many field lines as it can swallow from the accreting material, only the disk’s thickness and how fast the black hole spins matter in determining the outflows’ efficiency, the duo discovered. When the researchers looked at various spin magnitudes, they found that prograde spins generated outflows several times more efficient than retrograde spins did.

Tchekhovskoy explains that previous studies have come to different conclusions because they haven’t studied the most powerful jets creatable for each spin. “When you are figuring out which car is fastest, you push the accelerator pedal all the way to the floor,” he says. In this case, the pedal is the amount of magnetic field concentrated in the system. Higher concentration, stronger jet. A prograde setup allows the accretion flow to drag more magnetic field in toward the black hole, but that's just one factor, Tchekhovskoy says. A full understanding of what's afoot remains elusive.

Investigation further afield than the Dark flow pull, beyond The Great Attractor (Wiki, Dark flow)in the direction of the Centaurus and Hydra constellations, is needed to gather vital information.

If it is eventually possible to prove that light is gravitationally bending towards the latter point of reference, then we are inferring evidence for a new type of Black Hole size. If whole Galaxies are being swallowed up as the evidence indicates and its because of a Black Hole then that type of Black Hole is far larger than previously conceived.

My question is, can Black Holes exist of a size to the extent that the jets they produce create universes as they coalesce into matter when eventually they slow and cool down?

I wrote on this at http://www.huffingtonpost.com/social/Andrew__Planet?action=comments

Thanks Camille for this important update on Black Holes

Evidence from the following might prove me wrong or, Dark flow is a result of several black hole formations http://www.sciencedaily.com/releases/2008/09/080909095133.htm

How does the magnetic field strength in these examples compare to that of a magnetar? They are all stronger than we can really imagine, but I would guess that the prograde black hole would have the strongest field with the retrograde black hole and the magnetar somewhat less.

Also, the consumption of gas by the retrograde black hole should reduce. and possibly eventually reverse, its spin. Are there any estimates about how quickly this would happen? How long it would take? (Obviously depending on how much gas it is consuming.)