Growing evidence suggests that magnetic waves are the reason our star's corona is so hot. 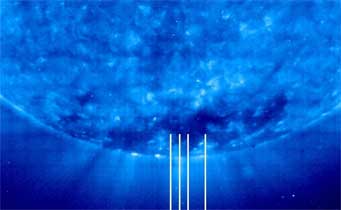 A close-up, false-color look at the Sun shows the large, dark polar coronal hole astronomers studied in order to determine what heats our star's corona. White lines show the position of the Hinode spacecraft's spectrometer slits, used to observe gas motions in the corona.

Last week, while many of us were suffering from sweltering temperatures, solar physicists meeting in Bozeman, Montana, were discussing their own heat problem: the enduring mystery of why the Sun’s corona is roughly 100 times hotter than the layers below it.

A new analysis by Michael Hahn and Daniel Savin (Columbia University) suggests that astronomers might have the culprit in hand. This culprit, the so-called Alfvénic waves, has been a suspect for more than seven decades. The oscillations move along solar magnetic field lines like the vibrations in a plucked guitar string, and it’s thought that somehow they transfer their energy to the Sun's hot, ionized gas. In 2011 the waves were detected permeating the upper solar atmosphere.

Last year two teams (one including Hahn and Savin) reported observations suggesting the waves were indeed dumping their energy into the corona. Both teams agreed that this energy might not only heat the corona but power the fast solar wind, the charged particles that stream out from coronal holes at 800 kilometers per second. But the researchers didn’t know how much energy the waves were depositing.

Hahn and Savin reanalyzed a subset of their previous observations from the Hinode spacecraft to try to answer this question. The astronomers couldn’t observe the waves directly; instead, they looked at how wide various spectral lines were for ionized elements (primarily iron) in the corona. This width depends on two things: how hot the gas is, and how much the Alfvénic waves slosh the gas along the line of sight (which in turn depends on the waves’ energy).

Unfortunately, astronomers can’t directly solve for both the temperature and the wave sloshing without making some assumptions. The Columbia duo made two: one, the ions’ temperature doesn’t change at different heights; two, the waves haven’t yet lost their energy when they reach the corona’s base. These assumptions are based on observations and should be reasonable, Hahn says. 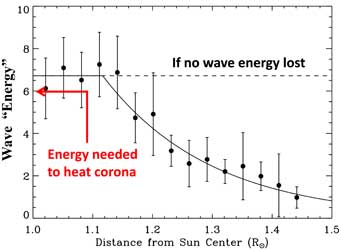 This graph shows the amount of energy lost by magnetic waves in the lower regions of the solar corona. Between 1.1 and 1.5 solar radii from the Sun's center, the waves appear to lose enough energy to heat the plasma in the coronal hole and power the fast solar wind.

Using these assumptions, Hahn and Savin managed to separate the temperature and wave contributions. That in turn allowed them to calculate how much energy the waves lost as they moved higher into the corona. The team found that, by the time the waves had traveled through the lowest quarter or so of the solar atmosphere, they had lost roughly 600 watts per square meter — just what’s needed to heat both the gas in the coronal hole and power the fast solar wind coming from it during the solar minimum, when the observations were taken.

“These results are very important, but unfortunately this is not the ‘end’ to the long story of the coronal heating problem,” says Alessandro Bemporad (Turin Astronomical Observatory, Italy), who coauthored the other 2012 study exploring Alfvénic waves’ energy loss. The assumptions and corrections made for instrumental effects are reasonable, but it’s hard to determine whether such corrections are in fact correct, he explains. Plus, no one knows exactly what kind of wave astronomers are detecting (hence my use of –ic in the waves’ name) or why the waves would lose energy. “Many, many questions are still open.”

The result also only applies to coronal holes, so it’s unclear whether the magnetic waves would be able to heat other regions of the corona, which are generally hotter. Hahn says they hope to look at that issue next.

They’re also exploring the lingering question of how the waves lose their energy. Among the possibilities are friction from the ionized gas as the waves move the plasma around and reflection, in which changes in the plasma’s properties (such as density or magnetic field) could cause some waves to reflect back and interact with outgoing waves, creating turbulence that ultimately encourages the waves to lose energy faster than usual.

Hopefully the recently launched IRIS mission will finally settle these questions once and for all? Then again, we are sure to see something we didn't expect to see!