The Truth About Neptune's Spin

Since Voyager 2's successful trip to Neptune in 1989, astronomers have believed that one "day" on the big blue planet lasts 16 hours 6.5 minutes. But by tracking the positions of two prominent features in Neptune's atmosphere for more than 20 years, Erich Karkoschka (University of Arizona) has produced a new estimate for one complete rotation: 15 hours 57 minutes 59 seconds. 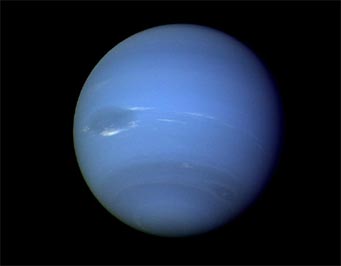 Voyager 2 imaged Neptune when it flew by in August 1989. Methane gas, which preferentially absorbs red light, causes the blue hue. The dark spot in the middle is a cyclonic storm as wide as Earth.

At first glance, it might seem that Karkoshka's observations, recently published in Icarus, has provided the correct value of Neptune's spin. But not all planetary scientists agree. They say that the disparity between the two estimates only shows that, 165 years after its discovery, the solar system's outermost planet remains an elusive mystery.

How a Giant Planet Rotates

Clocking a giant planet's spin is a daunting task. The four in our solar system are thought to have small solid cores surrounded by liquid and topped by dense atmospheres hundreds or thousands of miles thick. Their visible surfaces are actually cloud layers in the upper atmosphere, and these don't always rotate at the same rate. For instance, features within 10° of Jupiter's equator circle the planet every 9 hours 50.5 minutes (known as its System I rate), while features at higher latitudes take 9 hours 55.7 minutes (System II). Both values are just averages — individual features wander unpredictably, much like clouds and storms on Earth.

In the 1950s radio astronomers discovered that energetic bursts from Jupiter repeat at regular intervals. These presumably represent beams from Jupiter's magnetic field, which should be locked to the planet's deep interior. So this period, 9 hours 55.5 minutes (dubbed System III), is assumed to be Jupiter's true spin rate. 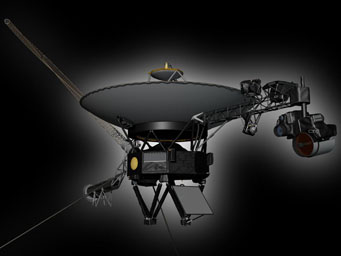 An artist's impression of Voyager 2. Voyager flew by the outer giant planets of our solar system and recorded the radio pulses from their magnetic fields. Astronomers used these to calculate the spin rate of these planets. Neptune's rate was calculated in 1989.

The Voyager missions that flew past the four giant planets, helped astronomers use a similar technique to clock the corresponding spins of Saturn (10h 39m 22s), Uranus (17h 14.4m), and Neptune. But in 2004, the Cassini orbiter showed that this method was not without its flaws either — on two counts. Saturn's radio-derived rate had sped up by 1%, and it might not even match what's going on inside. (A revised Saturn value, announced in 2007 and based on various observations, is 10h 32m 35 ±13s.)
"That's when we realized the magnetic field is not like clockwork but slipping," Karkoschka notes in a press release. "The interior is rotating and drags the magnetic field along, but because of solar wind or other, unknown influences, the magnetic field cannot keep up with respect to the planet's core and lags behind."

Hunting for a More Accurate Method

In his Neptune study, Karkoschka used images from the Hubble Space Telescope instead of relying on Voyager's radio data. Scouring through more than 500 images, he found two dark features — which he's dubbed the South Polar Feature and the South Polar Wave — that have rotated at precisely the same rate since the 1990s. He claims that this is the planet's true spin rate. 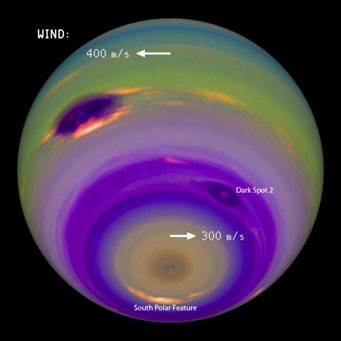 In this image, the colors and contrasts were modified to emphasize the planet”™s atmospheric features. The winds in Neptune”™s atmosphere can reach the speed of sound or more. Neptune”™s Great Dark Spot stands out as the most prominent feature on the left. Several features, including the fainter Dark Spot 2 and the South Polar Feature, are locked to the planet”™s rotation, which allowed Karkoschka to precisely determine how long a day lasts on Neptune.

"I think the accuracy of my data is about 1,000 times better than what we had based on Voyager measurements," he says, "a huge improvement in determining the exact rotational period of Neptune, which hasn't happened for any of the giant planets for the last three centuries."

Other planetary scientists agree that Karkoschka's result is both interesting and laudatory, but they're skeptical about calling it Neptune's true spin rate. The disparity in the results, they believe, do not invalidate the Voyager results but rather show instead how little we know about Neptune.

"The point of the work seems the stability of the features, which suggests that they might be linked to the interior," said outer-planet specialist Heidi Hammel (Association of Universities for Research in Astronomy). "Given that there is no known mechanism that actually links these features to the interior, this is intriguing but not conclusive."

William Kurth (University of Iowa), a member of the team that calculated the Voyager results, is impressed with the stability in the features and Karkoschka's new technique. However, he's not happy with the "guilt by association [with Saturn] of the radio technique used to determine the rotation of the outer planets as well as pulsars."

Saturn's magnetic field is not tightly coupled to the planet's interior, he explains, and the observed slipping has to do with the small offset (1°) of Saturn's magnetic axis from its rotational axis. But as this angle increases, the magnetic field becomes more tightly locked to the deep interior. So Neptune's field, tipped a whopping 47° to its spin axis, is highly likely to represent the rotation deep inside.

Kurth, therefore, believes that the disparate results point to a need for more data. Hammel agrees, adding that there's good reason to study the planet further: "The Kepler and COROT missions, as well as Earth-based studies, suggest that there are even more Neptune-sized planets than gas giants like Jupiter. A mission to Neptune or Uranus is really required to make major advances in ice-giant science."

In other news, astronomers discovered the correct value of
the Milky Way galaxy‘s rotation rate. Seriously folks, a spinning ball of gas and liquid does not have a "true" spin-rate, any more than Jupiter has a right color. Rotating liquids have well-defined angular momenta, but when it comes to their rate of spin, "fluids will be fluid."