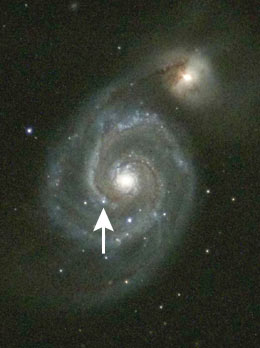 German amateur astronomers Werner Klug and Hermann von Eiff captured SN 2005cs (arrowed) on July 9th, a little more than a week after its discovery. The supernova flared in the Whirlpool Galaxy (M51).

On June 28th, German amateur Wolfgang Kloehr discovered a 14th-magnitude supernova in the Whirlpool Galaxy (M51), 31 million light-years away. Subsequent spectra of this surprisingly dim supernova, now known as SN 2005cs, revealed it to be a Type II event. A Type II supernova occurs when the iron core of a massive star collapses to form a neutron star or black hole, triggering a shock wave that violently ejects the star's envelope (jets may also play a role).

In a paper submitted to the Astrophysical Journal, Weidong Li (University of California, Berkeley) and seven colleagues announce that they have used Hubble Space Telescope and ground-based observations to identify the supernova's progenitor: a relatively low-luminosity red supergiant that apparently began its life with only 7 to 10 solar masses.

In a later paper submitted to Monthly Notices of the Royal Astronomical Society, an independent European team led by Justyn R. Maund (Cambridge University, England) has confirmed the progenitor identified by Li and his colleagues and reached a nearly identical conclusion about the star's initial mass.

"The result is rather stunning," says Alexei V. Filippenko (also at Berkeley), a coauthor of Li's paper. "The derived progenitor mass is very close to the minimum of 8 solar masses predicted by theory. Indeed, theoretical models actually prefer a minimum of 10 to 11 solar masses. SN 2005cs is pushing the limits of theory, forcing us to consider models [for any core-collapse supernova] in which the collapsing core is not made of iron, but of lighter elements."

The Hubble Space Telescope's Advanced Camera for Surveys acquired these images of a small field inside M51. The left image, taken in January, shows the field prior to the eruption of Supernova 2005cs. The right image, taken on July 11th, shows the magnitude-14 supernova. Images like this helped Weidong Li and his colleagues identify the progenitor star.

Li says that given the uncertainties in M51's distance and the reddening effects of dust, the progenitor might be slightly more luminous than originally inferred. If so, this would push the ill-fated star's birth weight up to a theoretically more comfortable 10 to 11 solar masses.

SN 2005cs belongs to a subclass known as Type II-plateau supernovae (SN II-P), because the object's optical brightness remained relatively constant for several weeks after the explosion rather than fading rapidly like other Type II subclasses. Update: The supernova's brightness was still magnitude 14.3 as of August 11th. It has remained between 14 and 14.5 almost the entire time since its discovery.

This is only the sixth progenitor identified out of 3,200 supernovae observed since 1885. Astronomers have previously identified progenitors for two SN II-P, which started their lives with 7 to 9 and 13 to 20 solar masses, respectively. Observations have also established that several other SN II-P progenitors had initial masses no greater than 15 Suns. These results suggest that stars of 8 to 20 solar masses give rise to SN II-P, which tend to have lower luminosities than most supernovae — and thus that low-mass supernova progenitors produce low-energy explosions. But Maund notes that only a handful of SN II-P progenitors have been identified. "The fact we haven't seen a more massive one doesn't rule them out completely," he says.

There's another twist to this story. Astronomers are currently discussing a possible connection between SN 2005cs and an X-ray flash (XRF) detected 8 days after the event by NASA's Swift satellite. XRFs are brief but intense bursts of X-rays that are thought to be lower-energy versions of gamma-ray bursts (GRBs). The XRF was observed a scant 10 arcseconds from the supernova's position.

Given that SN 2005cs and the XRF did not perfectly coincide in either space or time, and that the supernova has not exhibited any anomalous behavior, most astronomers think the two events are unrelated. But Li's group notes that given pointing uncertainties in Swift, astronomers cannot rule out the possibility that the X-ray emission came from the supernova. If the two events are related, the favored theories for XRFs and perhaps GRBs would be severely challenged, to say the least. According to these theories, the violent deaths of massive stars trigger GRBs and XRFs, so the burst of X-rays and gamma rays should nearly coincide with the onset of the supernova.

"The X-ray flash, unfortunately, is very likely to be unrelated to SN 2005cs," says Li. "Theoretically, one expects a gamma-ray burst or X-ray flash from the supernova just minutes or hours after its explosion. But it's possible the X-ray flash came from the supernova, with some unknown and bizarre cause. But it is very difficult to draw definitive conclusions on the association because of the very poor resolution in Swift's X-ray images."

"The X-ray flash has become the subject of a vigorous debate amongst us," adds Schuyler Van Dyk (Caltech), a coauthor on Li's paper. "It's very difficult to explain how it suddenly appeared 8 days after the explosion, then vanished. I have not heard a good explanation of its origin, or how it could be connected to the supernova." 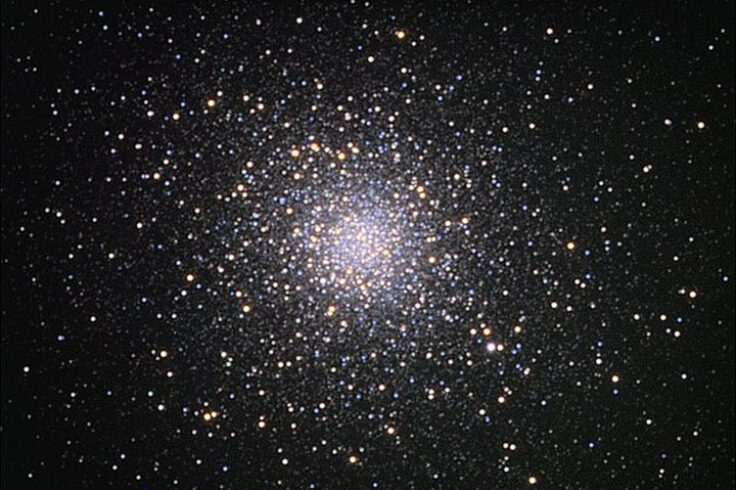