Global Astronomy Month returns this April with its month-long celebration of astronomy. This third edition of the annual Astronomers Without Borders event has over 30 programs scheduled with something for just about everybody: public skywatching parties with telescopes large and small, their proud owners showing the Moon and planet to crowds at night; Sun-viewing gatherings around filtered telescopes during the day; public talks about astronomy; hands-on telescope demonstrations; and much more. See a sampling of programs offered across the globe in this trailer. 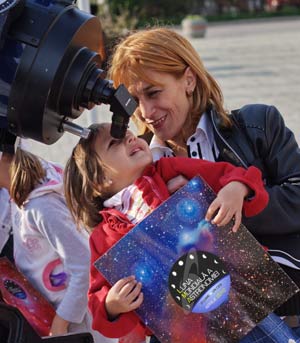 A mother and daughter look through a telescope in Romania during a Global Astronomy Month 2010 event.

Public star parties are always the most popular way to share our sky with others, and there are plenty of programs encouraging them. The month begins on Sunday with SunDay, putting our closest star in focus, and Lunar Week, watching the waxing Moon as it grows to full on Friday the 6th. The Global Star Party on April 28th is the granddaddy of them all, with amateur astronomers coming out worldwide as darkness sweeps around the Earth. Everyone is invited to share their observations through blogs and social media and see what their international compatriots are doing.

Thirty Nights of StarPeace takes connectivity even further, bringing together star parties in similar longitudes. Every 3 nights, countries in one of 10 longitude segments will have the chance to organize observing events that transcend their borders. This moving slice of star parties will travel westward from the International Dateline throughout the month until it circles the globe.

Global Astronomy Month 2012 also includes six online observing events hosted by Dr. Gianluca Masi of the Virtual Telescope project, run by the Bellatrix Astronomical Observatory in Italy. The online Messier Marathon again opens the month, and a search for new asteroids and the chance to name a new object closes it with “Write Your Name in the Sky.” All sessions include a chat box for Q&A with Masi, and participants from around the world share their thoughts as well. There are more online programs of various types, both live and recorded.

Global Astronomy Month 2012 is an important time to teach the public about the importance of preserving our night sky, and several programs promote dark skies awareness. Some efforts seek to get out information, such as the 365 Days of Astronomy podcasts, and others focus on hands-on activities like Globe at Night. The International Earth and Sky Photo Contest organized by The World at Night returns, too, looking for the best wide-field photographs of Earth and sky that show either the beauty of a dark sky or the problem of light pollution.

Last year’s programs highlighting astronomy and the arts were very popular, so this year boasts an expanded offering. The planned live performances include the Cosmic Concert, featuring original music by composer and performer Giovanni Renzo against a backdrop of images from The World at Night. OPTICKS also returns with images reflected off the Moon and retrieved by radio dishes. There are video presentations with Q&A, as well as an astropoetry contest and various classroom activities.

Don't forget to check out the Global Astronomy Month Blog, which will present 30 different perspectives on astronomy from around the world with a new blogger each day throughout April. From amateurs to astronauts, from local activists to famous bloggers, from countries and cultures around the world, the blog will cover topics as diverse as the world of astronomers who take part.

Whether you take an active role in organizing an event or just join in the fun, Global Astronomy Month 2012 has a program you’ll want to be a part of. Connecting us all through our common passion for astronomy — the mission of Astronomers Without Borders — is the ultimate goal. Astronomy is something we can share across all cultures, even at a distance, and learn about each other in the process. Wherever we are, we share the same sky.

Mike Simmons is a contributing editor to S&T and the founder of Astronomers Without Borders. He also co-chaired 100 Hours of Astronomy, the IYA2009 Cornerstone Project that kick-started Global Astronomy Month.