Thomas M. Back, an amateur astronomer and optician associated with some of today’s finest refractors and eyepieces, died suddenly on September 13th. He’d turned 50 on June 15th. 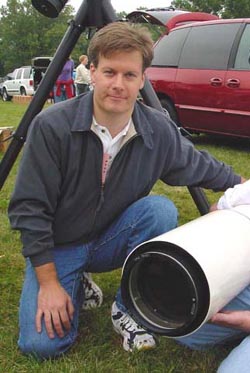 Back got an early start in astronomy, following a familiar path for many amateurs of the day. A native of Ohio who lived most of his life in the Cleveland area, he received a 60-mm refractor as a Christmas present when eight years old. Wanting a better telescope with which to view the Moon and planets, Back eventually ground a 6-inch f/8 mirror while a teenager.

That mirror-grinding experience launched a lifelong interest in optics and optical design, which eventually connected him with people very influential in the world of amateur telescopes. In the late 1990s he started a side business, TMB Optical, selling primarily high-end refractors. After a few years the company became moderately successful, and running it became Back’s full-time job.

Another lifelong interest was bicycling. However, according to Mike Bieler of Astronomics, the major dealer of TMB telescopes and eyepieces, Back’s health had been declining for several years following a severe neck injury sustained in a bicycle accident. Even so, Back’s untimely death came as a shock to the astronomical community. Tributes to Back and his contributions have appeared on newsgroups and websites. His name will continue to live on, as the TMB line of optics will remain available for the foreseeable future, according to Bieler.

I just found out this evening that Tom Back has passed away. I first met Tom when we both worked at a record store when we were in out early 20's! Tom was a great guy - so smart!! I always loved to listen to him talk! I remember when he would get his new issue of Sky and Telescope he would put plastic gloves on to read it so as not to get the pages all full of fingerprints!! He inspired me to buy a beginners scope, and he also inspired me to quit smoking and take up running, which I did for many years until I had to have foot surgery. I am shocked and saddened by this untimely news. I wish I had kept in touch.