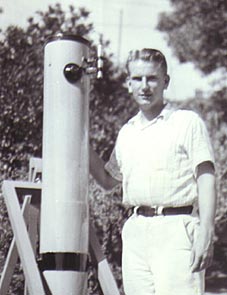 Renowned planetary observer and telescope maker Tom Cave posed for this 1937 photograph with the 6-inch f/10 Newtonian reflector he made two years earlier.

Amateur astronomy lost a vital link to its 20th-century past with the June 4th death of Thomas Roland Cave III following a prolonged battle with congestive heart failure. A pivotal figure among planetary observers and the founder of a renowned telescope-making firm that bore his name, Cave was born in Kansas City in 1923. His lifelong interest in astronomy was sparked by a visit to Chicago's newly opened Adler Planetarium in 1930. The following year the Cave family moved to southern California, then as now a hotbed of amateur astronomy and telescope making.

In 1935 Cave ground and polished a 6-inch f/10 mirror from a plate-glass blank and constructed a Newtonian reflector carried on a sturdy English yoke mount. He soon emerged as an avid observer of the planets, especially Mars. During a prolific observing career spanning more than six decades he submitted more than 2,000 meticulous drawings of the red planet to the Association of Lunar and Planetary Observers (ALPO), the British Astronomical Association, and the Oriental Astronomical Association. 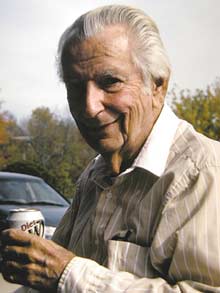 Cave was among a small group of skilled planetary observers that assembled at Tom Dobbins’s Ohio home in October 2000.

After serving with distinction as a combat medic with the 4th Infantry Division in Europe during World War II, Cave studied mechanical design at the University of Southern California. In 1950 he founded the Cave Optical Company in Long Beach. Pioneering the mass production of Newtonian and Cassegrain reflectors, the firm produced more than 15,000 telescopes before ceasing operations in 1980. Highly prized by several generations of amateur astronomers, Cave "Astrola" reflectors enjoy the status of collectibles today (S&T: August 1994, page 88).

Cave was honored with many awards, including the prestigious Bruce Blair medal of the Western Amateur Astronomers and the Walter Haas Award presented by ALPO. His extensive circle of friends and correspondents included a host of prominent amateur and professional astronomers around the world.