When NASA launched the Fermi Gamma-ray Space Telescope on June 11, 2008, the goal was to study some of the most extreme phenomena in the very distant universe — gamma-ray bursts, jets from supermassive black holes, supernova shock waves. Little did the Fermi team expect that its satellite would discover what lightning researcher Steven Cummer of Duke University is calling “One of most exciting discoveries in geosciences in quite a long time.” 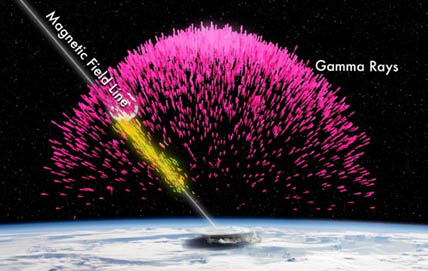 Mysterious events in thunderstorms often send a spray of gamma rays upward into space (purple in this illustration). Some of the gamma rays create electrons and positrons along the way. If this happens in the top of the atmosphere at the edge of space, the electrons and positrons become trapped along Earth's magnetic field lines (yellow), where they and swing back and forth between the Northern and Southern Hemispheres.

Fermi has found that thunderstorms sometimes produce tight beams of antimatter that shoot into space. Antimatter consists of particles matching the properties of familiar particles such as protons and electrons, but with the opposite electric charge. When particles of matter and antimatter meet, they annihilate one another to produce two gamma-ray photons governed by Einstein’s famous equation E = mc2. In Star Trek, this interaction powers the starship Enterprise. As Cummer explained during a Monday press conference at the American Astronomical Society meeting in Seattle, “The idea that any planet can produce antimatter and beam it into space in narrow beams sounds like science fiction.”

Results from Fermi’s Gamma-ray Burst Monitor (GBM) instrument show that positrons — the antimatter counterpart of electrons — are produced by "terrestrial gamma-ray flashes" above thunderstorms. TGFs were discovered in 1994. They are brief (often less than a thousandth of a second) but intense bursts of gamma rays associated with thunderstorms. Scientists estimate that about 500 TGFs occur each day around the world, though most go unnoticed.

Since Fermi's launch, the GBM team has detected 130 TGFs, mostly in tropical regions where thunderstorms are most common. In four of these TGF events, the GBM also recorded a quick flash of gamma-ray photons with a specific energy of 511,000 electron volts. That’s the characteristic energy of electrons and positrons annihilating one another. “TGFs aren’t just making gamma rays, they’re also making positrons,” says GBM science team member Michael Briggs (Univerity of Alabama, Huntsville).

In most cases, Fermi was orbiting directly above the thunderstorm that produced a TGF. But in four cases the storms were hundreds of miles away, and the GBM was struck by electrons and positrons that traveled along Earth’s curved magnetic field lines. In one instance, Fermi was over Egypt but detected particles coming from 2,800 miles to the south below the horizon, from a thunderstorm over the African nation of Zambia, as illustrated below. 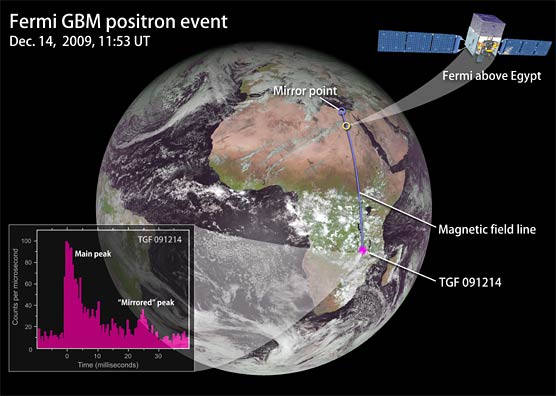 While NASA's Fermi gamma-ray observatory was passing over Egypt on December 14, 2009, the spacecraft was hit by a particle beam from a terrestrial gamma-ray flash (TGF) that occurred over a thunderstorm in Zambia. Fermi's Gamma-ray Burst Monitor detected positrons annihilating on the spacecraft — not once, but twice. After passing Fermi, some of the particles reflected off of a magnetic "mirror point" and returned 1/40 of a second later. Click image for larger view.

“Even though Fermi couldn’t see the storm, the spacecraft nevertheless was magnetically connected to it,” says Joseph Dwyer (Florida Institute of Technology). “The TGF produced high-speed electrons and positrons, which then rode up Earth’s magnetic field to strike the spacecraft.”

The exact mechanism for producing the positrons is unknown, but Dwyer explained one possible method. Strong electric fields within a thunderhead accelerate electrons to near the speed of light. The electrons strike atoms in the cloud to produce gamma rays, some of which zoom off toward space. En route, a gamma ray collides with an atom in Earth’s uppermost atmosphere. An interaction known as pair production (also governed by E = mc2) can convert a gamma ray into an electron-positron pair. The two particles fly onward but, being charged, follow Earth’s magnetic field lines in tight, narrow beams.

Cummer pointed out that despite decades of research, scientists still don’t know exactly how lightning is produced or how it propagates within clouds. “This discovery has very important implications for understanding lightning itself,” he said. “A new result like this gives us important clues about what’s happening. Only a few processes can be creating antimatter, so this will help us piece together a more complete picture of how lightning works.” Cummer added that lightning researchers are just becoming aware of this discovery, and it will take time for them to digest its implications. “It will take thought and careful considerations to see what clue to the puzzle this provides.”

Dwyer says the same processes that produce positrons in Earth’s thunderstorms are probably doing the same thing on other planets that have lightning, such as Jupiter and Saturn. But on those planets the lightning occurs much deeper in the atmosphere, and it’s possible that any antimatter particles annihilate with atmospheric particles back to gamma rays before they can reach outer space.

I saw a red sprite once, very far away, and it caught my attention. It went well above the thunderhead. At the time, many years ago, these things were very mysterious. Since then other kinds of high energy lightning have been discovered, they come in red, blue, and various other colors. Now they have found it in gamma rays and positrons. Fascinating stuff.

I wondered if this could be the explanation for holes in the data from a Southwest Research Institute satellite that was examining the ultraviolet emission from the upper atmosphere from neutral excited atomic oxygen, which creates a glow on the day side of Earth and the auroral belt. The holes were interpreted at the time as mini-comets but such things weren't hitting the Moon, which would have been detected by the Apollo seismometers. It turned out to be neither. There was a defect in the instrument.

If Earth has anti-matter generating storms, does Jupiter and Saturn have massive generation of the same event? 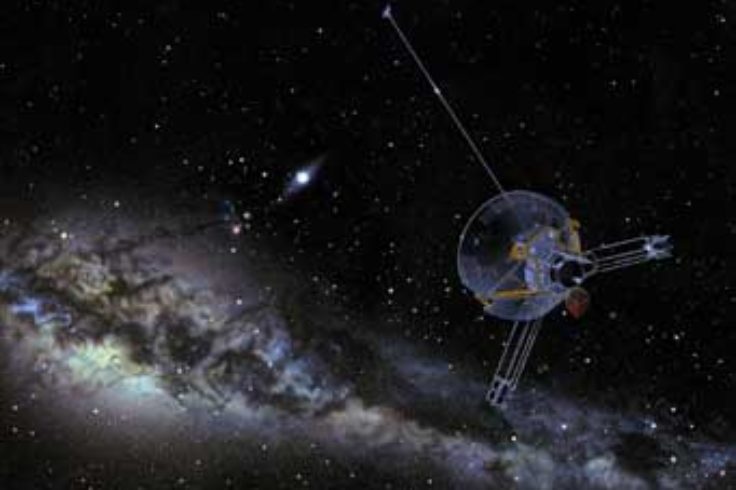 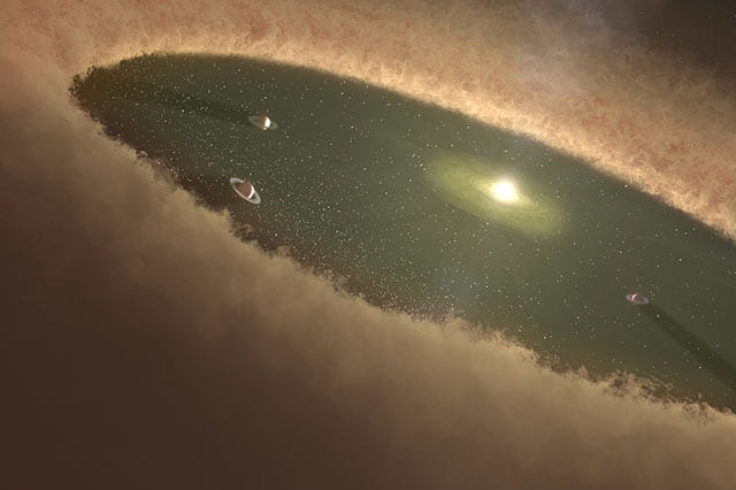