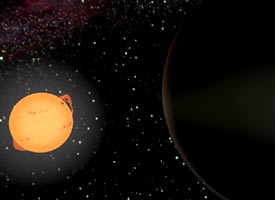 An artist depicts the newly discovered extrasolar planet, TrES-1, and its host star. Because of its close proximity to the star, TrES-1 is heated to about 850 degrees C (1,560 degrees F).

Until now, all of the 125 or so known extrasolar planets were discovered with large telescopes equipped with cutting-edge detectors. But an international team has identified a planet circling a distant star using mostly off-the-shelf equipment and a 4-inch Schmidt telescope. In fact, team coleader Timothy Brown (National Center for Atmospheric Research) assembled the discovery telescope and fine-tuned its optics in the garage of his Colorado home.

"I have been an amateur telescope maker a long time," says Brown. "I couldn't find the parts I needed at a reasonable price, so I built it myself."

"Our system has been cobbled together mostly with different amateur parts," adds David Charbonneau (Harvard-Smithsonian Center for Astrophysics), another team coleader. 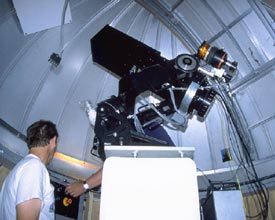 The STARE telescope has an aperture of only 4 inches, but it made an important discovery: a transiting exoplanet.

The new find is what's known as a "hot Jupiter" — a large gaseous object orbiting within just a few million kilometers of its parent star. The planet's existence was betrayed by a slight drop in the star's brightness that occurs whenever the planet crosses directly between it and Earth. The discovery heralds the coming of a new era when small telescopes doing wide-field surveys will pinpoint new exoplanets through similar transits.

Roi Alonso (Astrophysical Institute of the Canaries) discovered the planet with Brown's telescope, named STARE, which is stationed on Tenerife in the Canary Islands. STARE belongs to a network known as the Trans-Atlantic Exoplanet Survey, or TrES (pronounced "trace"). The other two TrES instruments are not even telescopes. They are commercial 4-inch camera lenses located at Lowell Observatory in Arizona and on Palomar Mountain in California. The cameras sit atop inexpensive amateur mounts using SBIG autoguiders. They focus their images onto professionally made CCDs, but Charbonneau points out that the CCDs are nearly identical to a unit now sold by Apogee Instruments, a company that manufactures CCD cameras frequently used by amateur astronomers.

The three TrES instruments measure the brightnesses of thousands of stars in large patches of sky very precisely to look for subtle, periodic dips in brightness caused by planets transiting across their stars’ faces. Alonso found the new planet in a 36-square-degree field (about half the size of the Big Dipper's bowl) in Lyra, containing 12,000 stars brighter than 12th magnitude. STARE imaged the field every two minutes all night long for two months, then computer software sifted through the massive volume of data to detect 16 stars that showed telltale evidence for transits. 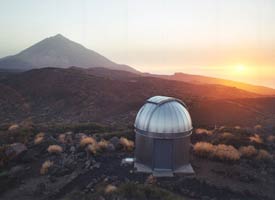 This dome houses the STARE telescope, which resides on the Canary island Tenerife.

The astronomers knew that most of these would be red herrings. David Latham (Harvard-Smithsonian Center for Astrophysics) and his colleagues observed the 16 candidates with 60-inch telescopes at Oak Ridge Observatory in Massachusetts and the Whipple Observatory in Arizona. Their low-resolution spectroscopic data showed that most of the candidates were merely eclipsing binary stars, but one candidate stood out: an obscure, 11.8-magnitude K0 dwarf star named GSC 02652–01324, located 500 light-years from Earth.

Next, Alessandro Sozzetti and Guillermo Torres (both at the Harvard-Smithsonian Center for Astrophysics) took high-resolution spectra of the star with the 10-meter Keck I telescope in Hawaii. The Keck observations revealed the clear signature of a stellar wobble induced by a close-in, planetary-mass companion. The planet has 75 percent the mass of Jupiter and orbits the star in a circular path every 3.03 days at a distance of just 0.04 astronomical unit. The discovery team has tentatively named the planet TrES-1.

"Technically, an amateur could have discovered these candidates, but that's not enough," notes Charbonneau. "You have to keep in mind that we monitored 12,000 stars, and that it took several Ph.D. scientists working full-time for several years to build the equipment and develop the software. All the technology and components we used are commercially available, but it's very difficult to write the software and analyze the data."

The planet dims the star by 0.023 magnitude for three hours every time it crosses the star's face. Based on the amount of dimming, the new planet must be about 8 percent larger in diameter than Jupiter. It thus has an average density of about 0.75 gram per cubic centimeter, which is less dense than Jupiter (1.33) but denser than Saturn (0.70). The planet's density closely matches theoretical predictions for gas-giant planets orbiting close to the blistering heat of their parent stars. 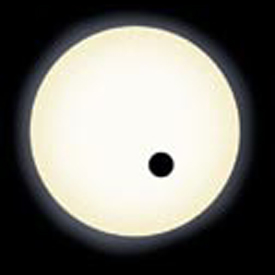 In this artist conception, a gas-giant planet transits the star HD 209458. This planet has about the same mass as TrES-1, and is heated to about the same temperature. But for unknown reasons HD 209458b is considerably larger.

Amateur astronomers have detected transits of the exoplanet HD 209458b and they should be able to detect the new planet's transits. The star's coordinates are 19h 04m 09.8s, +36° 37' 57" (2000.0). "Amateurs were only nine months behind in catching the HD 209458b transits; they will be quicker with this new planet," predicts Brown. "This is a great research project for amateurs and colleges." More information on amateur searches for transiting exoplanets can be found at transitsearch.org.

The TrES-1 discovery team is applying for observing time on the Hubble Space Telescope to look for the spectral signature of various elements and molecules, including water vapor, as starlight skims through the planet's outer atmosphere during transits. The team is also analyzing data from eight other fields in hopes of catching additional transiting planets. "I'm optimistic we'll find more," says Brown. 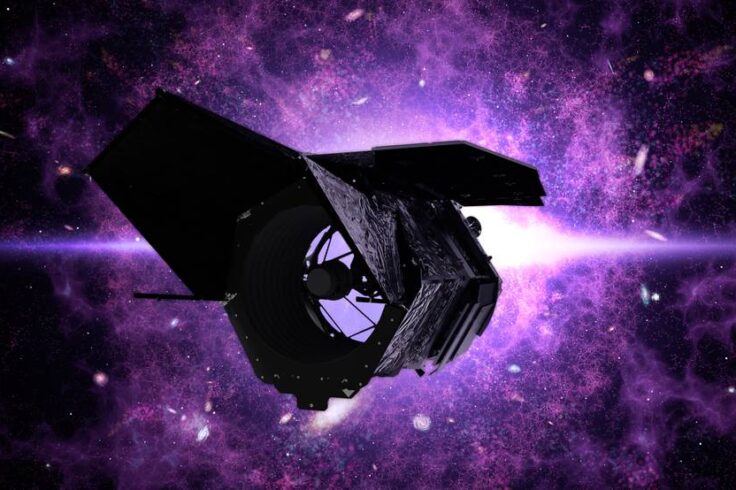 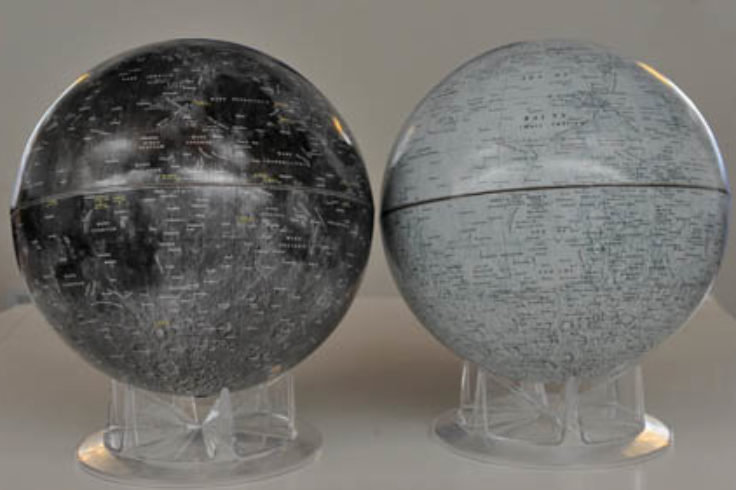