A pair of diminutive telescopes inside basketball-size cubes will give scientists new views of the brightest stars in the galaxy. 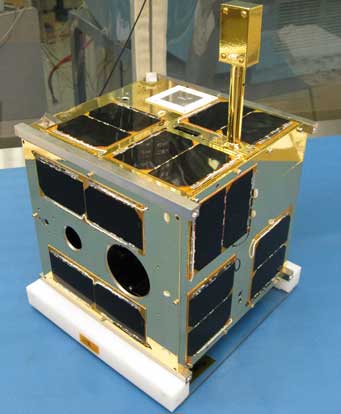 Fully assembled, a BRITE satellite sits in the lab waiting for launch. The black squares are solar panels. The BRITE satellites are kept in a sun-synchronous, dusk-dawn orbit, which allows long, uninterrupted views of the brightest stars in the galaxy.

Astronomers interested in variable stars got a new set of eyes in the sky this week. The Bright Target Explorer (BRITE), a pair of cubical satellites just 20 cm on a side and weighing less than 7 kg each, hitched a ride to an 800-kilometer-high orbit with the Indian Polar Satellite Launch Vehicle yesterday morning. As the name suggests, BRITE will monitor changes in brightness in the brightest stars in the sky — those above visual magnitude 4.0 — including stars in Orion, Leo, and Serpens.

Changes in brightness can be caused by a wide variety of phenomena, from star spots to planet transits. Long-term variations might be related to periodic changes in magnetic activity, like the solar cycles of our Sun. Studying these phenomena can teach us about stars’ evolution and internal workings, says Cordell Grant, manager of satellite systems at the University of Toronto’s Space Flight Laboratory, which built BRITE.

The biggest and brightest stars live short, violent lives, and their supernovae explosions spew heavy elements such as oxygen and silicon outward. These ejections make significant contributions to the “ecology of the galaxy,” Grant says, by changing the compounds available to make stars and planets. So studying variability in the biggest stars may ultimately help scientists better understand how the galaxy evolved — and even how the galaxy made the elements that life on Earth is built of.

Grant says that small telescopes such as BRITE are better suited for this work than large, expensive scopes like Hubble, whose sensitive instrumentation can easily be overwhelmed by bright light. Each BRITE satellite sports a 70-mm, f/2.3 lens with a 24° × 19° field of view, connected to an off-the-shelf Kodak KAI-11002 CCD. The optics won’t result in beautiful pictures like those from Hubble; instead, they are specifically designed to detect the tiny variations in brightness that BRITE astronomers seek. 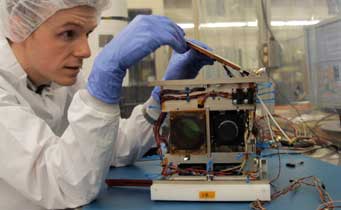 Satellite systems manager Cordell Grant assembles the first BRITE satellite. Each satellite hosts optics, communications equipment, onboard processors, and reaction wheels, which help scientists reposition the units in orbit. The two circular holes in the middle are a telescope (left) and startracker (right).

Of course, BRITE is not the first project to study variability. The American Association of Variable Star Observers (AAVSO) has been gathering such data for decades. But AAVSO director Arne Henden says that his organization’s observations — made through the 100 hazy kilometers of Earth’s atmosphere — are far less precise than the measurements BRITE will take.

Still, the two sets of observations will complement each other. The AAVSO’s long-term measurements can be combined with BRITE’s newer measurements to catch trends, Henden says. And amateur astronomers can also contribute to BRITE science by performing observations from a wide geographic area, and with novel techniques such as polarimetry and near-infrared photometry, the latter of which requires bright stars. “As with almost any survey,” he says, “the net effect is to find something unknown that bears further inspection by others.”

The two BRITE satellites now in orbit are the first third of what will eventually be a six-satellite “constellation.” Three of the next four satellites already have launch contracts and will be in space within a year. Grant hopes the fourth, which has yet to be finalized, will join them on roughly the same timeline.

You can learn more about BRITE and how it compares to the Canadian small-satellite project, MOST, in this video from the University of Toronto: