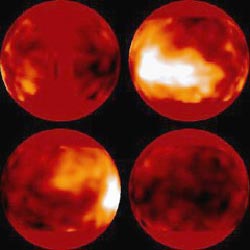 Near-infrared images of Titan's enigmatic surface, obtained by the Hubble Space Telescope in 1994. Titan rotates 90° to the right between each view. The infrared-brightest areas may be especially pure or fine-grained ice; the darkest areas are also icy but may contain organic deposits.

When the European Space Agency's Huygens probe parachutes through the haze-choked atmosphere of Titan in January 2005, it will find a world covered in large part with ice, not hydrocarbon gunk as some planetary scientists have suggested. That's the conclusion from a group of scientists who have penetrated the haze at eight narrow infrared wavelengths to get the best spectral evidence from the surface yet.

Titan, the largest moon of Saturn, may rate as the most fascinating unexplored world in the solar system. Unique among moons, it has an atmosphere much thicker than Earth's. The atmosphere, mostly cold nitrogen, is laced with methane that rains onto the surface from moving storm clouds and, judging from recent radar data, pools into lakes or seas. The liquid may be tinged with hydrogen cyanide, acetylene, and more exotic compounds. 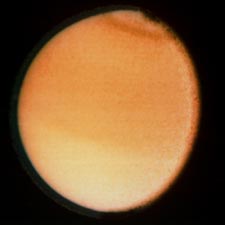 At visible wavelengths Titan's surface is hidden by a thick veil of smoggy hydrocarbon haze. Its orange color can be seen in amateur telescopes.

Titan's surface is veiled beneath a thick, orange haze composed of complex hydrocarbons and other organic molecules coming largely from methane breaking down in sunlight. Planetary scientists have long suspected that hydrocarbon solids, including frozen ethane and propane, have precipitated out of the atmosphere over the ages and covered the world with a layer of organic sediment averaging perhaps 800 meters thick.

If so, it has drifted or flowed enough to leave much of Titan's bedrock — consisting of ordinary water ice — exposed to view, say Caitlin A. Griffith (University of Arizona) and four colleagues in the April 25th issue of Science. Working with two infrared telescopes on Hawaii's Mauna Kea, they found that the infrared reflectivity of most of Titan's surface resembles that of Ganymede, a more ordinary outer-solar-system moon surfaced with dirty ice and no atmosphere. Most of Titan's body is expected to consist of ice with a rocky core.

The organic stuff has to be somewhere, however. "Titan's thick haze obscures a surface expected to harbor both the source and the sink of much of Titan's atmosphere," the scientists write. If the surface is rugged rather than flat, the sediments should collect in the deepest low-lying regions comprising just a fraction of Titan's area.

A rugged terrain is just what Ralph Lorenz of the University of Arizona's Lunar and Planetary Laboratory predicts. He estimates that erosion from wind and liquid wears down Titan's surface at only 1/400 the rate of erosion on Earth, while internal mountain-building forces should be proceeding at 1/50 the rate on Earth — leading to a world of jagged, relatively uneroded heights and chasms rather than flat plains. "These considerations suggest that Titan's landscape will have bizarre complexity, with craters and tectonics featuring prominently," Lorenz said in a press statement last October. "These features will be much less eroded than on Earth or Mars."