A primordial galaxy could yield insight into the elusive process of early galaxy formation.

The further back in time astronomers look, the foggier the universe becomes. This cosmic cloudiness has prevented us from observing galaxies forming in the early universe — and by early, I mean less than a billion years after the Big Bang. But new research into a strange object lying near Mira in the constellation Cetus might yield some much-needed insight into the young universe. 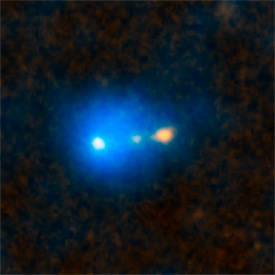 Himiko seen with the Hubble Space Telescope and the Subaru Telescope located on Mauna Kea in Hawaii. The blue halo (Subaru) represents the hydrogen gas that is being ionized by the intense star formation in the trio of galaxies. Clumps are lettered A,B, C from left to right.

First spotted in 2009, this object originally seemed to be a big bubble of ionized gas. Further observations suggested it was a galaxy whose light had taken 13 billion years to reach Earth, shining at us from a redshift of 6.6. And yet more refined observations revealed it to be a much rarer object: a merging triple system of infant galaxies, on course to possibly evolve into a galaxy akin to our Milky Way.

The triad of star-forming regions, named Himiko for a famous queen of ancient Japan, existed when the universe was only an infantine 800 million years old. Astronomers often refer to this era as the cosmic dawn, when the earliest galaxies were churning out stars. We’ve observed very few galaxies around this time, including one less than 500 million years after the Big Bang . The most active period of star formation came later, when the universe was a sprightly 2 to 3 billion years old.

The three star-forming regions of this soon-to-be galaxy also give Himiko its notability. Together, they produce 100 Suns per year (give or take a few) — an order of magnitude more than most galaxies seen by the Hubble Space Telescope (HST) at similar cosmic times. To put it in perspective: the titanic expanse of our Milky Way creates only one Sun’s worth of stellar mass each year. Only a couple of known early galaxies match or exceed Himiko’s rate, and it’s not clear whether these few incredibles hint at something surprising in the early universe. 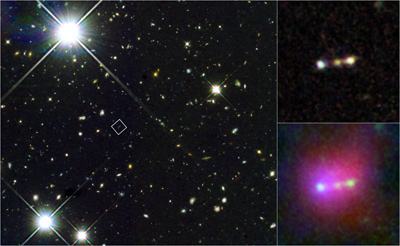 A section of sky with many young galaxies, including Himiko imaged by Hubble's Wide Field Camera 3.

Such active star-forming regions should show evidence of heavy elements, such as carbon. These heavier chemical building blocks are formed inside the furnaces of hot, massive, short-lived stars as they age, then are dispersed by the stars’ violent deaths. However, observations of the infant trinity from the Atacama Large Millimeter/submillimeter Array (ALMA) and HST completely lack any indication of carbon.

While a single missing element sounds innocuous, it could actually be a big deal. Astronomers have long been on the hunt for the most primordial stars and galaxies, which would only contain hydrogen and helium and (maybe) a trace of lithium. If the gas cloud surrounding the three clumps is as heavy-element free as the data suggest, then Himiko is a crucial example of a primordial galaxy seen during its formation.

Read the full paper on Himiko.

The statement “While a single missing element sounds innocuous, it could actually be a big deal” caught my attention, since the element in question was carbon. Carbon isn’t just the basis of all organic chemistry; it is a building block in the nucleosynthesis of all the other heavier elements as well. Since carbon is so low in this extremely early galaxy group, all other metals must be low or absent too. Could the stars in these galaxies be the elusive Population III, completely metal-less stars?

Also, carbon is not that heavy either. It is actually only the second stable element to be formed in the cores of stars, after helium, in a sequence known as the triple alpha process. First two He4 nuclei (aka alpha particles) fuse to form beryllium 8, but Be8 is unstable, splitting back into two alpha particles with a half life of only about 53 days. If however before a Be8 can decay it happens to be hit just right by another alpha particle, then voila, you get a Carbon 12 nucleus. So this process has happened to almost every C atom in us, as well as in almost all the other heavier atoms inside us too.