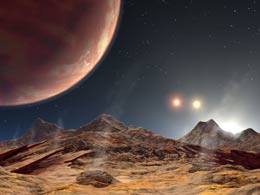 Artist Robert Hurt depicts the Jupiter-mass planet (upper left) in the HD 188753 system as seen from a hypothetical moon. The planet orbits the bright, yellow star that is setting behind the distant peaks on the right. Two companion stars, which form a tight binary in the far background, lie to the upper left of the host star. Click on the image to view a larger version.

Can multiple-star systems support life-bearing planets? This is an important question for astrobiologists because more than half of all stars in our galaxy belong to binary, triple, or higher-order systems. Astronomers have found several giant planets orbiting one member of widely separated binary systems. But a recent discovery, if confirmed, shows that tighter multiple-star systems can also have planets.

In the July 14th Nature, Maciej Konacki (Caltech) reports a planet orbiting the triple-star system HD 188753 in Cygnus. Konacki employed a novel technique that he developed to find planets around binary stars. He used the 10-meter Keck I Telescope to tease out the gravitational wobble caused by a planet with at least 1.14 Jupiter masses in a tight, 3.35-day orbit around the primary star, a G dwarf nearly identical to the Sun. The primary, in turn, has two stellar companions (a G-dwarf and a K-dwarf) a little less massive than the Sun that orbit each other as a binary pair. The primary star and the two secondary stars, in turn, go around each other in an elongated orbit that ranges from about 6 to 18 times the average Earth-Sun distance, or about from Jupiter's to Uranus's distance from the Sun.

"The environment in which this system planet exists is quite spectacular," says Konacki, who likens it to Luke Skywalker's home planet Tatooine in the Star Wars saga. "With three suns, the sky view must be out of this world, literally and figuratively." 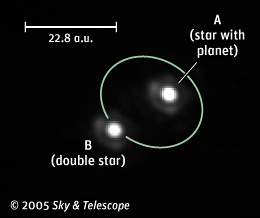 This near-infrared image from the Keck II Telescope shows the HD 188753 system. A newly discovered planet closely orbits the primary star (A), which is virtually identical to the Sun in mass and luminosity. The secondary star (B) is actually two stars that are so close to each other that they cannot be individually resolved. Both of these stars are slightly less massive than the Sun. The A and B components are separated by a distance that ranges from 6 to 18 astronomical units. The oval shows the projected orbit of component B, assuming a fixed position for the primary star (A). In reality, components A and B orbit a common center of mass that is actually closer to B, since the combined mass of the two stars is greater than the primary’s mass.

The existence of a "hot Jupiter" planet in such a tight triple-star system poses challenging questions about how planets form. Theorists have long thought that hot Jupiters form much farther from their host stars and migrate into tight orbits through gravitational interactions with their circumstellar disks. But it's highly unlikely this could have happened in HD 188753. The disrupting gravitational influence of the secondary pair of stars would have truncated the disk around the primary, severely limiting the amount of available material to make a giant planet.

Theorists Alan P. Boss (Carnegie Institution of Washington) and Jack J. Lissauer (NASA/Ames Research Center) think the planet probably formed at a greater distance from its host star and was flung into its current orbit during complex gravitational interactions that should occur as multiple-star systems evolve from unstable to stable configurations. This game of cosmic billiards may have involved other stars that were once bound to HD 188753 and were subsequently ejected, or interloping stars in the crowded cluster environment.

Several astronomers have expressed caution about this reported discovery, noting the relatively low precision and small number of radial-velocity observations reported in the Nature paper.

Listen Up: Get Gravitational-wave Alerts