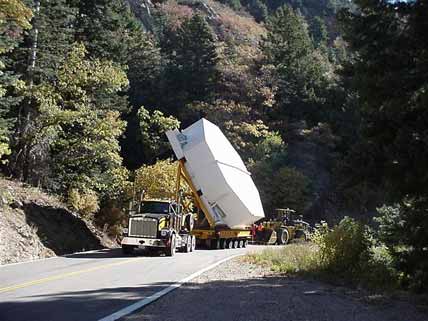 The largest monolithic telescope mirror, one of a pair of reflectors for the Large Binocular Telescope atop Emerald Peak summit of Mount Graham, Arizona, is seen here en route to the mountain.

When the Hale Telescope's 5-meter (200-inch) mirror was trucked to its final destination atop Palomar Mountain in November 1947, it inched its way over a winding, 258-kilometer (160-mile) route at an average speed of 15 km (9.3 miles) per hour. The two-day affair shut down roads and enthralled a nation eager for news about the construction of the world's largest telescope.

Perhaps we've become jaded. More than a half-century later, astronomers last week used the same tender loving care when moving the world's largest monolithic telescope mirror. But no one seemed to notice. From October 23rd to 30th, a team of astronomers, engineers, police, and heavy-load specialists trucked the first of the Large Binocular Telescope's twin 8.4-meter mirrors from the University of Arizona's Mirror Lab in Tucson to the 3,190-meter (10,480-foot) Emerald Peak summit of Mount Graham. The two-stage operation required five months of preparation.

The first phase began on October 23rd, when the 16-metric-ton mirror and its 33.5-metric-ton steel transport box were loaded onto a truck at the Mirror Lab. Early the next morning, the truck hauled the assembly to the Mount Graham International Observatory base camp near the Pinaleno Mountains. The mirror and its 25-vehicle police escort averaged 72 kph as the convoy traversed 196 km.

The second and more arduous phase took place from October 27th to 30th. On the 27th the mirror was placed on a massive trailer, and for the next three days the trailer climbed 2,400 meters on a gravel road called Swift Trail at the snail-like pace of 1.6 kph. The trailer rode on 48 wheels, each with its own independent hydraulic system to maintain the mirror's upright posture as the trailer negotiated 47 km of winding road and narrow, hairpin turns. Telescope assembly supervisor J. T. Williams inspected every foot of Swift Trail beforehand, and observatory and Arizona Department of Transportation staffers smoothed over bumps and ruts in the gravel.

With the transport successfully completed, the mirror is scheduled to see first light in the summer of 2004. The Mirror Lab will soon begin polishing the second 8.4-meter mirror, which should reach Emerald Peak in early 2005. The two mirrors will operate in tandem as an interferometer, making the Large Binocular Telescope one of the premier optical observatories in the world.