New images from the Large Binocular Telescope show that the bifocal leviathan may finally be living up to its promises. The shots, taken with only one of the observatory’s two 27.6-foot (8.4-m) scopes, reveal direct images of planets around a distant star, young stars huddled together in Orion, and a dusty disk that may be colliding with surrounding material. 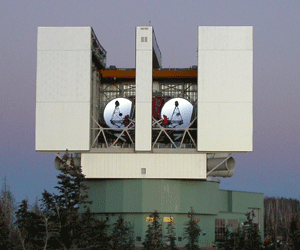 The Large Binocular Telescope stares out at the night sky from its forested surroundings at the Mt. Graham observatory.

While the LBT isn’t fully operational just yet, the near-infrared images certainly whet the appetite. It looks like the observatory’s performance is at least as good as that of the Keck scopes atop Mauna Kea in Hawaii, says Ben Zuckerman (University of California, Los Angeles) of the new exoplanet images. “This is saying something,” he explains. “Keck has probably been the best performing of the already-established advanced optics systems in the world.”

The LBT is part of the Mt. Graham International Observatory in Arizona and is the result of a long collaboration between U.S., German, and Italian institutions. It combines two telescopes on a single platform. Each primary mirror is large by itself, but when used in tandem they have the light-gathering power of a single 11.8-m instrument and the image sharpness of a 22.8-m one. (Basically really, really good.) The heavyweight in optical and near-infrared has long been the Keck 10-meter twins, but with the end of their interferometer days the Kecks may be passing the baton to the LBT.

That baton pass has been long-delayed. The LBT saw first light in 2005, and since then it hasn’t been making big waves. That’s not to say it hasn’t produced good science. But the observatory’s real promise lay in its planned state-of-the-art advanced optics system, which uses 672 tiny magnets on the back of each ultrathin secondary mirror to deform the mirror 1,000 times per second, counteracting the atmosphere’s blurring effects.

Building these mirrors posed a major technical hurdle, explains LBT director Richard Green. Each secondary mirror is 36 inches in diameter but only 1.6 millimeters thick. “It’s like a giant contact lens,” Green says. “It’s very fragile. The mirrors were difficult to learn to make in the first place.” A couple mirrors actually broke before the team figured out the manufacturing and shipping details, he says. Until these mirrors could be added to the scopes — the first one was popped in last fall — the LBT used regular, rigid mirrors to perform observations.

Observations from the first advanced-optics science run are what appear in the new papers. While the two next-gen mirrors won’t be united until next month, already the angular resolution of the one scope's images is ten times sharper than what it was before, Green says. “It makes a remarkable difference. The objects that were the subjects of these papers would just be invisible.” With both mirrors in place, the LBT's image sharpness should increase by another factor of three, to a total of tenfold better than the Hubble Space Telescope's resolution. 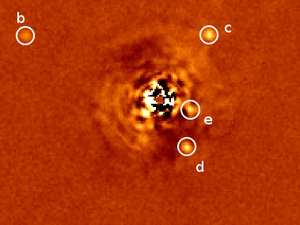 The HR 8799 planetary system shows up brightly in a narrow infrared band centered on 3.3 microns, which is sensitive to absorption by methane, a common component of gas giant and cool brown dwarf atmospheres. This is the first time the innermost planet, HR 8799e, has been imaged at this wavelength.

One of the systems that LBT looked at was HR 8799, one of only a handful of exoplanet systems directly imaged. HR 8799 also excites astronomers because it’s a multiple-planet system, with four giant planets circling a bright, massive star, almost like a scaled-up version of the solar system (no inner rocky planets have been found yet, though). Given how bright the planets look in the near-infrared, the international team of astronomers who used the LBT to look at HR 8799 argues that the planets are probably covered by patchy clouds, similar to those seen on Jupiter and cool brown dwarfs.

The new images don’t make a gigantic leap in our understanding of this system, but they do advance us in the right direction, says Zuckerman, a codiscoverer of the first HR 8799 planets detected.

The LBT also looked at a dusty disk around the star HD 15115 that appears to be plowing into the surrounding interstellar material on one side, and a collection of stars in the Trapezium, the group of stars that illuminates the Orion Nebula. The new Trapezium observations are a sevenfold improvement in accuracy from previous orbital measurements, the Italian and American authors report. The new data show that all five stars in the Theta1 Orionis B system — a part of the larger Trapezium — probably compose a “mini-cluster,” a predicted tight-knit gravitational cradle of stars that formed together and that over time kick out their least massive members, like big brothers picking on little siblings.

While astronomers suspected that tightly bound mini-clusters existed, they needed highly accurate position measurements like those from the LBT to prove the Theta1 Ori B stars were actually orbiting each other and didn't just look related because of their place on the sky, explains study coauthor Laird Close (University of Arizona's Steward Observatory). Comparing the LBT's measurements with observations from the last 15 years allowed them to see angular motion of 0.5 milliarcsecond per year — "like one dime crawling out from behind another dime 2,000 miles away, and taking an entire year," Close says.

The LBT's snazzy design can be a little hard to visualize. You can watch a 3-D video animation of the binocular telescope's design online (just scroll to the bottom of the page for MPEG and QuickTime options).

Now, that's a nice pair of binoculars. Not very portable, however. But even in it's early, one-eyed mode it's great to see it yeilding results already. We exoplanet fans are used to reading accounts of planets that can only be deduced from tranists or radial velocity light curves. Those are fine, but to actually be able to see a photo of a multiple planet system brings the proof to a whole new level of confidence. HR 8799 was a great choice as first light target for the LBT. This system is the first directly-imaged multiple planet system ever found. It's a little more than 100 lightyears away, and yet with only half of the LBT operational the pros are able to report findings about the chemicals in the clouds of it's four gas giants. What kind of moons might obit these 7 to 10 Jupiter mass monsters? It woundn't surprise me if some of their moons even have moons themselves. I can hardly wait to see what the fully operational LBT may reveal.

Actually what the LBT astronomers are saying is that with one mirror and adaptive optics the LBT is 3 times sharper than the Hubble Space Telescope. In the binocular mode with AO it will be 10 times sharper than the Hubble. Moreover, the scientific papers recently released claim that the new AO technology will provide far more sky coverage and reach into the visible light spectrum than previously believed. Of course, no large telescope, including Keck has provided astronomers the opportunity to work with a fizeau interferometer. The confusion here about Hubble is fascinating.

Another possibly amazing fact about the HR 8799 system and it's inmost (known) planet. Looking at HR 8799 in the i-phone app "exoplanet" I came across this: The outer three giants are shown to share the same orbital plane, but the inner "e" planet's orbital angle is shown to be tilted by about 62 degrees to that of the others. Is this accurate? If so, what could have booted 9 Jupiter massed "e" out the system's more general orbital plane, or does this young system have two accretion disks at greatly divergent angles? 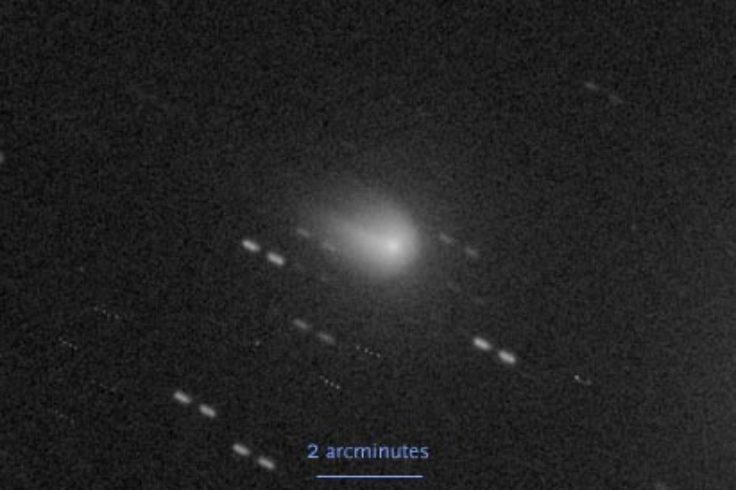 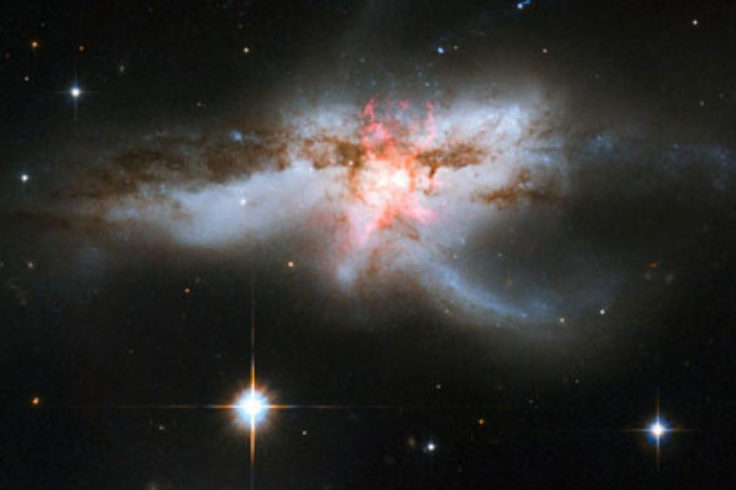 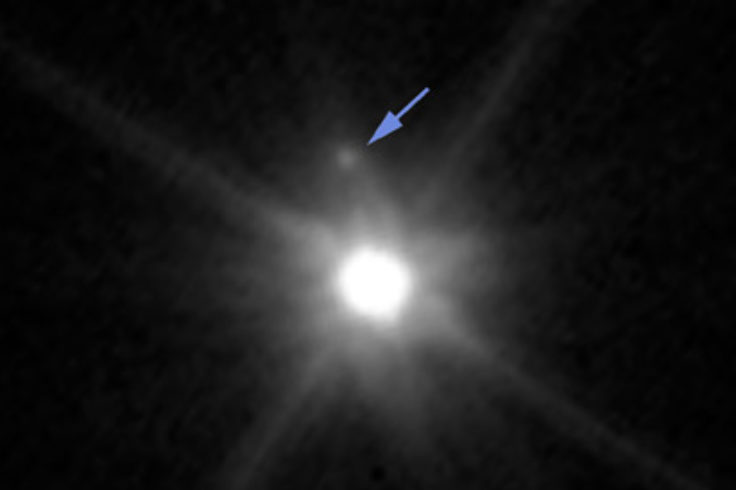 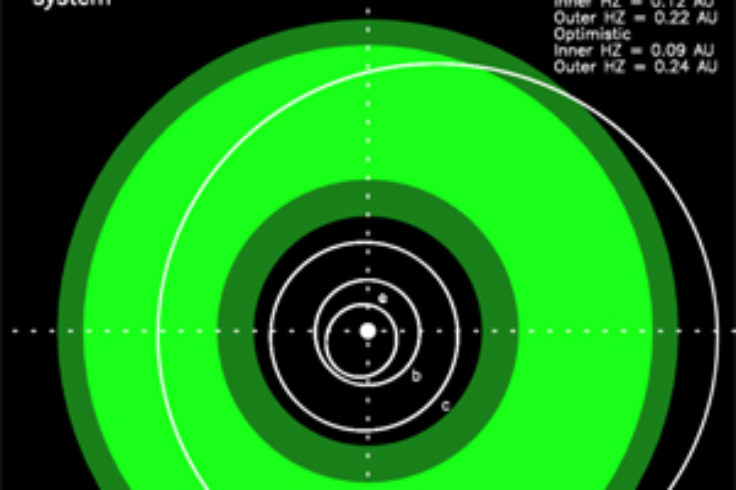