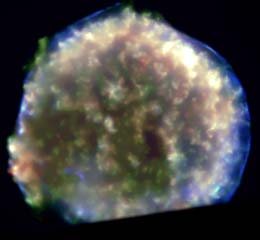 This Chandra X-ray Observatory image reveals the gaseous remnant created by a supernova observed by Tycho Brahe in 1572. Red, green, and blue represent low, medium, and high X-ray energies, respectively. The lack of a central point source is one of several pieces of evidence that the remnant was created by a Type Ia supernova. A Type II event would have created a glowing neutron star. The bottom part of the image was outside the field of the detector.

On November 11, 1572, Tycho Brahe noted the appearance of a bright new star in the constellation Cassiopeia. This startling sight challenged the popular Aristotelian view of an unchanging heavens and perhaps even contributed to the opening scene of Shakespeare's Hamlet.

Today we recognize this "new star" as the most recent of only two Type Ia supernovae recorded within our galaxy. A Type Ia supernova is thought to occur when a white dwarf in a binary-star system steals matter from its companion, probably a normal Sun-like star or a red giant. When the white dwarf exceeds 1.4 solar masses, a runaway thermonuclear reaction in its core blows it apart. But astronomers are uncertain about how the white dwarf manages to accrete gas from its companion without igniting as a classical nova, in which material undergoes nuclear fusion on its surface. Because of this puzzle, a few scientists have argued that some or all Type Ia supernovae result from two white dwarfs merging.

An international team led by Pilar Ruiz-Lapuente (University of Barcelona, Spain) reports in the October 28th Nature that it has found the companion star that triggered Tycho's supernova. The team measured the relative velocities of stars in the glowing supernova remnant, located about 10,000 light-years away, in hopes of finding the companion star that pushed the white dwarf over the edge. The surviving donor star would have fled the scene like a stone flung from a sling, retaining its orbital velocity at the time of the explosion. Using both ground-based telescopes and the Hubble Space Telescope, they found a Sun-like star (named Tycho G) at the right place that is moving three times faster than the surrounding stars.

The arrowed star in the Hubble Space Telescope image (right) is Tycho G, a fast-moving star that might be the companion to the white dwarf that was seen to explode in 1572. Tycho G is similar to the Sun but several billion years older. It is noticeably offset (by 2.6 arcseconds) from the center of the supernova remnant. Its motion is much faster than that of any other star in its neighborhood.

"There was no previous evidence pointing to any specific kind of companion star out of the many that had been proposed," says Ruiz-Lapuente. "Here we have identified a clear path: the feeding star is similar to our Sun, but slightly more aged. The high speed of the star called our attention to it."

"I would not bet my house on it, but this appears to be the best candidate for the progenitor's companion," says independent commentator Mario Livio (Space Telescope Science Institute). "It certainly is moving fast, but that is about all that it has going for it. It is not moving phenomenally fast; nor does it appear to have an unusual composition."

Future observations may reveal evidence, such as an iron-rich supernova ejecta signature in Tycho G's spectrum, to verify that the star was the donor. But Livio cautions, "There are not many options to confirm this completely unambiguously. We may be left with a tantalizing possibility that it is the companion, but without knowing for certain."

If Tycho G is indeed the survivor of Tycho's supernova, it would provide the first direct evidence that astronomers are on the right track to understanding Type Ia supernovae. In particular, it would exclude the possibility that all Type Ia's are merging white dwarfs. It would also prove that not all progenitor companions are red giants.

A confirmation would also have ramifications for cosmology. Type Ia supernovae have extremely bright and predictable luminosities, making them ideal "standard candles" for measuring the expansion of the universe. Observations of these explosions in distant galaxies have led astronomers to the startling conclusion that cosmic expansion is accelerating. Livio points out that astronomers have calibrated the luminosities of Type Ia supernovae accurately, and observations from WMAP and other microwave background experiments independently support an accelerating universe. "Still, it has been somewhat unacceptable that we did not know what Type Ia supernova progenitors are," he says.