On November 11, 1572, the Danish nobleman Tycho Brahe spotted a brilliant new star in Cassiopeia. In the following days it became brighter than Venus, shone through the blue daytime sky for two weeks, and took 16 months to fade altogether from sight.

It convinced Tycho that the realm of the stars was not changeless and eternal as traditional philosophy had long taught. It prompted him to become an astronomer, and thus eventually helped to set modern astronomy in motion. 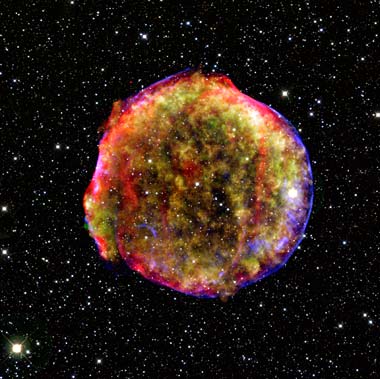 More than 400 years later “Tycho’s Supernova” is just a wispy, expanding remnant of debris, best seen at radio, infrared, and X-ray wavelengths (as in the composite image at right). From indirect evidence, astronomers have deduced that the supernova must have been a Type Ia, the kind that results from the runaway thermonuclear explosion of a carbon-oxygen white dwarf. Because their intrinsic luminosities are well known (by and large), Type Ia supernovae have become crucial “standard candles” for measuring large cosmic distances — and from those, the changing expansion rate of the universe.

Astronomers have dreamed of carrying spectrographs back in a time machine to 1572 and observing the supernova alongside Tycho, but that hardly seemed possible.

Now, in a sense, it is. In September 2008 a team from Germany, Japan, and the Netherlands observed Tycho’s supernova exploding in 1572 via a 436-year-old light echo. They identified the light of the explosion reflecting very faintly from interstellar dust clouds many light-years off to the side and behind, far enough away to give the light an additional 436 years of travel time. 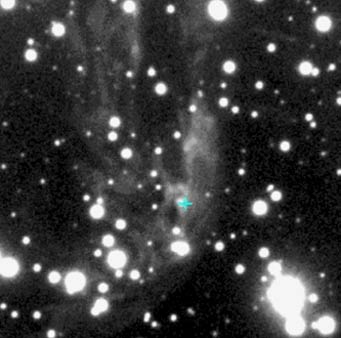 As the years go by, light from the 1572 supernova is reflecting off wisps of interstellar dust farther and farther from the blast. The blue cross marks the spot where the researchers took their spectra of the reflected light.

The spectrum of the reflected blast clearly identifies it as a Type Ia supernova of the “normal” variety seen at its time of maximum brightness. Spectral evidence also suggests that the blast was asymmetric. The team was, in fact, able to model the outburst in detail. It’s the first supernova in our galaxy to be classified by its outburst spectrum.

And like time travelers, astronomers will be able to observe the supernova over and over again whenever they want, for centuries to come — for as long as the light echoes remain visible.

The extremely faint light echoes are located well off to one side. They required deep exposures by the 8.2-meter Subaru Telescope on Mauna Kea in Hawaii.

The National Astronomical Observatory of Japan (NAOJ), which runs the Subaru Telescope, touted the accomplishment with a press release. The Max Planck Institute for Astronomy in Germany issued a press release of its own, complete with video animations.

The astronomers' research paper appears in the December 4, 2008, issue of Nature.

Difficult detective work here. Folks reading this may want to read the NASA ADS Abstract and arxiv e-print report,
Title:The binary progenitor of Tycho Brahe's 1572 supernova
Nature 10/2004. Some more difficult work here. Perhaps the surviving progenitor is a G0/G2 star similar in mass to our Sun but perhaps closer to luminosity class IV. The white dwarf apparently is missing and tracing the white dwarf back to its main sequence mass (e.g. ZAMS star) I did not find information on.

That is simply amazing. Words fail to describe the incredibleness of being able to do something like that.