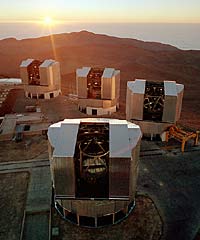 The VLT at sunset. Four 8.2-meter telescopes form the heart of the European Southern Observatory's Very Large Telescope facility on Cerro Paranal in Chile. British astronomers will now have access to it following today's announcement of ESO membership.

In a significant milestone for U.K. and European astronomers, on Monday Britain was welcomed as the 10th member of the European Southern Observatory during a historic meeting of the ESO Council in London. This means British astronomers will shortly have access to some of the world's finest instruments, including the Very Large Telescope (VLT) at Cerro Paranal in the Chilean Atacama desert, complementing their share in existing resources such as the 8-meter Gemini North telescope in Hawaii and its twin, Gemini South, in Chile.

But all this comes at a price. Britain's membership fee in ESO will consist of approximately £50m ($75m), with an additional £30m ($45m) as "in-kind" contributions. For the latter, Great Britain will turn over its 4-meter Visible and Infrared Survey Telescope (VISTA) to Paranal Observatory when it comes online in 2006 and meanwhile will supply survey data from the United Kingdom Infrared Telescope's (UKIRT) Wide Field Camera (WFCAM). Observations from VISTA will eventually be part of an e-Science program valued at approximately £7.6m.

Then there is the matter of the £12m ($18m) annual subscription. In its 2000 spending review, the British government allocated an extra £10m per year over the next decade to facilitate joining ESO. However, this still leaves a financial shortfall to be made up by the Particle Physics and Astronomy Research Council (PPARC), the body that funds astronomical research in the U.K. PPARC will eventually fund the annual subscription from its own budget.

Joining ESO has meant funding cuts to other observatories under PPARCs umbrella. There will be continued support for the 4.2-meter William Herschel Telescope (WHT) of the Isaac Newton Group of Telescopes (ING) on La Palma in the Canary Islands. However, there will be an early withdrawal from the 1.0-meter Jacobus Kapteyn Telescope at the end of 2002 with a further review of the ING before the middle of the decade. Staffing levels will be reduced as well. There will also be a phased reduction of PPARC funding to the Anglo-Australian Observatory.

Despite these worries, the general mood in U.K. astronomy is upbeat. Lord Sainsbury, Science and Innovation Minister says, "I am sure I speak for the entire U.K. astronomy community when I say how much we are looking forward to participating in ESO and taking advantage of its marvelous facilities." Astronomer Royal Sir Martin Rees adds, "Joining ESO is good for U.K. science, and I think good for Europe as well. It... restores the U.K.'s full competitiveness in optical astronomy... U.K. membership in ESO is a significant and welcome outcome of this government's increasing investment in science." 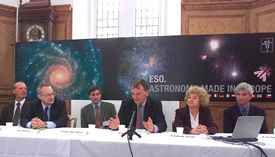 A press briefing to celebrate the occasion was held at the Royal Greenwich Observatory in London on Monday. Pivotal figures from ESO, PPARC and the U.K. astronomical community were present, and each were at pains to emphasize that the benefits of joining ESO, with its world-class telescopes, far outweighs any short-term cutbacks.

The primary instrument at the superb viewing site of the Paranal Observatory in Chile is the Very Large Telescope, or VLT. Its four 8.2-meter telescopes will eventually work in concert with movable, smaller instruments to synthesize a much larger aperture using interferometric techniques. The U.K. will also be able to use the two 4-meter telescopes at the La Silla observatory farther south. 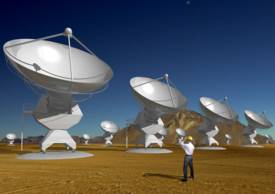 Artist's impression of the Atacama Large Millimeter Array (ALMA). Up to 64, 12-meter antennas will be placed on the Chajnantor site, a high plateau of about 5,000 meters (more than 16,000 feet) amongst the Andean mountains in Chile.

British astronomers will increase their input into other projects in the ESO pipeline, such as the Atacama Large Millimeter Array (ALMA) and the 100-meter Overwhelmingly Large Telescope (OWL). ALMA is a U.S.-European venture to build a network of 64 millimeter-wave receivers in northern Chile by the end of this decade, the largest ground-based astronomy project ever undertaken. OWL is farther in the future.

Further information may be found in the press releases from ESO and PPARC.