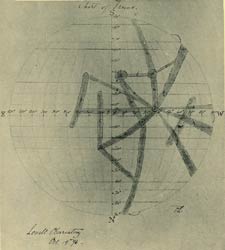 This 1896 map of Venus by Percival Lowell shows the infamous spokes along the surface of the cloudy planet. It now appears that the structures he witnessed were really reflections of blood vessels in his eye.

Percival Lowell's name is synonymous with canals on Mars and the discovery of Pluto. But as reported in the July issue of Sky & Telescope, about a century ago Lowell also made some infamous observations of Venus. Throughout his career, Lowell insisted on the existence a central dark spot and a spindly spoke pattern on the cloud enshrouded planet. Lowell called the dark blemish the "subsolar spot," believing it to be fixed in position as required by the synchronous rotation he thought the planet maintained relative to the Sun. On the other hand, Lowell's spokes seemed to remain fixed not with respect to the Sun but the Earth.

Generally dismissed as illusion, Lowell's spokes have haunted planetary observation historians for more than a century. But even illusions have to have explanations.

Now there's a new theory, independently suggested by several astute readers of the recent S&T article, which may finally lay the century-old mystery to rest. Their interest was piqued by the unusual observing setup Lowell used in making his observations. Although he used the famous 24-inch Clark refractor, Lowell found that the markings on Venus showed up best when the instrument was stopped down to a mere 3 inches. With that setup, Lowell shrank the Clark telescope's exit pupil to a pinhole of diameter less than 0.5 millimeter in front of his eye.

Sherman Schultz, a retired optometrist, notes that Lowell's setup simulates what he used in his practice in examining patients for cataracts. Andrew T. Young (San Diego State University) and Philip C. Steffey also both realized that the small exit pupil might have revealed shifting shadows of Lowell's blood vessels on his retina. As Young notes, a small exit pupil often casts shadows of blood vessels on the retina, making them visible. "As the eye pupil moves with respect to the small telescope pinhole, the angle at which rays arrive at the retina changes, so that features [that are] within the eye but a little removed from the retina may cast shifting shadows on the latter and be seen." This effect is a well-known annoyance among planetary observers using very high magnification.

Steffey points out that an exit pupil of 0.5 mm would be about the size of the fovea or less. The resulting light beam in the eye would have been "capable of casting shadows of blood vessels and 'floaters' in the vitreous body on the retina." Instead of mapping the surface of Venus, Lowell would have been mapping the structures in his eye!