Views of the Pale Blue Dot 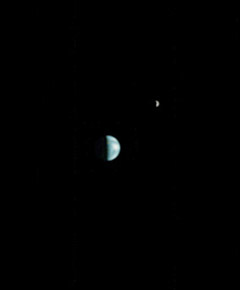 Earth and the Moon as seen in a telescopic view from Mars, 139 million kilometers away.

There aren't any amateur astronomers on Mars (yet), but yesterday NASA released an image of what will await Mars colonists someday when they look to Earth with small telescopes.

The Mars Global Surveyor craft orbiting the red planet took a break from its work on May 8th to aim its high-resolution MOC camera at the "evening star" shining brightly in the Martian sky. Earth was only 19 arcseconds in diameter at the time and shining at magnitude –2.5, somewhat less brilliant than Venus appears in in our own sky. The Moon next to it was magnitude +0.9. At the time the Moon and Earth were nearly in line with each other (the Moon is in the background). Normally they appear much farther apart than seen here. The full image also captures Jupiter in the background, much farther to one side.

The surface of the Moon is so dark compared to Earth that the Moon's brightness had to be boosted in order for it to show well in the image. The MOC camera takes only black-and-white pictures; this view has been colorized based on other spacecraft pictures. 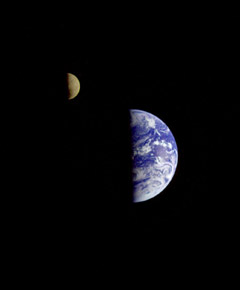 Earth and Moon seen by Galileo from just 6 million km.

Several other space probes have taken Earth-Moon portraits (in real color) when the two were near the same line of sight. On December 16, 1992, the Galileo craft looked back at the pair just 8 days after swinging past Earth on its way to Jupiter. In the famous view at right, Antarctica is visible through clouds at the bottom of Earth's disk. The image was taken in violet, red, and near-infrared light, and these colors were adjusted to give a realistic look to the Earth. The colors were then enhanced to emphasize contrasts (the Moon is not actually brown). Again, the Moon has been artificially brightened. 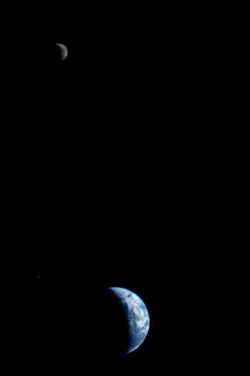 Voyager 1 looked back on our double planet from a distance of 12 million km shortly after launch in 1977.

For the image at left, Voyager 1 looked back to the Earth-Moon system on September 18, 1977, 13 days after its launch toward Jupiter. In the picture are eastern Asia, the western Pacific, and part of the Arctic. Voyager 1 was directly above Mount Everest on Earth's night side. Again, the Moon has been artificially brightened.