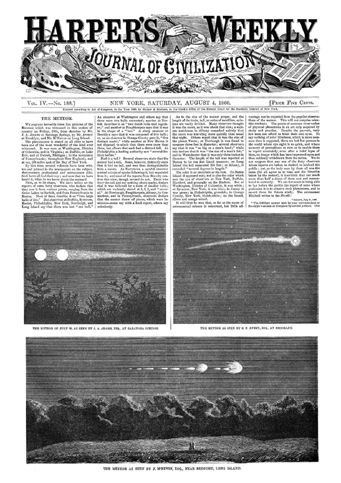 The meteor procession of July 20, 1860, was widely covered in newspapers and magazines of the day.

What did American poet Walt Whitman mean by "the strange huge meteor-procession" that went "shooting over our heads" with "its balls of unearthly light"? These phrases appear in a short poem from Whitman's Leaves of Grass titled "Year of Meteors. (1859-60)."

It's 150 years later, and now we know. The July 2010 issue of Sky & Telescope gives full details of a new finding by Texas State University astronomer Donald W. Olson and colleagues. This press release summarizes their results, and the article is already making waves in the general media, such as New Scientist, the Los Angeles Times, or even the Tehran Times.

The Texas team links Whitman's words to a very rare celestial spectacle — a string of fireballs that marched, duckling style, across the evening sky for residents of the U.S. Northeast on July 20, 1860. The researchers clinch their case with a little-known but beautiful painting, The Meteor of 1860, by Frederic Church. 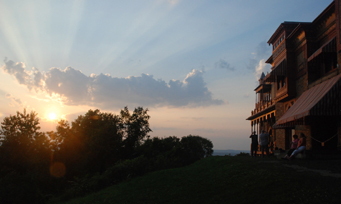 This is the latest in a remarkable series of projects that Olson and his honors classes have tackled during the past two decades. And this time, I got to tag along and see them in action.

For last summer's research trip, Olson headed to the Hudson/Catskill area of New York with coauthor (and English professor) Marilynn Olson, colleague Russell Doescher, and honors student Ava Pope. The prime attraction was Church's magnificent home, Olana, now a museum. The staff let us spend a whole day, poring through archives to look for clues about Church's
comings and goings in the summer of 1860.

Church was on his honeymoon, and Olana was still but a gleam in his eyes. So the newlyweds might have stayed in Catskill with Theodore Cole, a close friend and the son of Thomas Cole, a fellow artist of the Hudson River Valley School. It's tempting to imagine the couple enjoying the night air, perhaps on the Cole house's wide porch, when the meteors soared by. 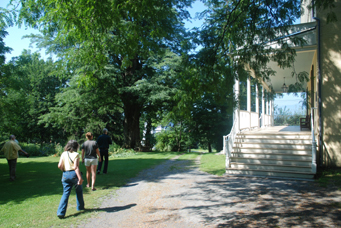 The Texas researchers check out the home of Thomas and Theodore Cole, situated in Catskill, New York, directly across the Hudson River from Olana. In 1860, unlike today, there would have been a grand view from this porch to the south, where the meteor procession passed.

Porches! Does anyone use them anymore? People certainly did in 1860, as we learned while going through an extensive paper by James H. Coffin in the Smithsonian Contributions to Knowledge (Vol. XVI). Coffin trudged across New England with a theodolite, interviewing all the eyewitnesses he could. He found 16 in his own hometown of Easton, Pennsylvania, crediting his good luck to "the prevalent custom of our people, to sit at the front doors of their houses in summer evenings."

Coffin's exhaustive study helped the team get a clear idea how the meteor procession must have looked, not just to Frederic Church in Catskill, but also to Walt Whitman in New York City.

This is not the first time an Olson-led team has identified a chance celestial event as the catalyst for a great poet or artist's work. Six years ago they showed that Edvard Munch's haunting painting, The Scream, was not entirely a fantasy of the Norwegian artist's troubled mind. The Texas researchers learned that Munch was likely an eyewitness to a blood-red sky a few months after the 1883 eruption of Krakatoa, an event that vivified sunsets around the world and caused lurid twilights as far north as Oslo. The most famous versions of The Scream were painted several years after 1883.

Hey — want to hear the actual voice of Walt Whitman? The foremost American poet of his age died in 1892, but not before reciting a few lines from another poem of his, "America," into a wax-cylinder Edison phonograph. Check it out here.

Fascinating story, thanks. Olson and his team do great work. There's something very satisfying about correlating astronomical events with our more earth-bound history. The meteor theory of dinosaur extinction makes these connections on a huge scale. Olson's investigations of Munch's painting and Whitman's meteors are more charming because they don't involve loss of life.

I had wondered about this meteor since reading Whitman in 8th grade. Granted I'd forgotten about it for a long time. Thanks for the explanation!