Astronomers are working to unravel the mystery of the Sun's superhot corona, but new work implicating magnetic waves isn't the final word on the matter.

One of the long-standing mysteries of astronomy is why the Sun’s outer atmosphere is so darn hot. This layer, called the corona, is the wispy, extended halo visible in a total solar eclipse and blazes at millions of degrees. But the layer below the corona, called the chromosphere, is roughly one hundredth that temperature, and the solar surface beneath it is even cooler. 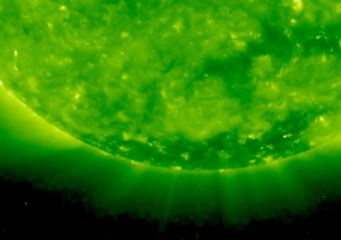 A close-up look by the STEREO spacecraft in 2008 shows a large, dark hole in the solar corona in the Sun's southern polar region. The fast solar wind is thought to stream out of such coronal holes.

The blazing corona mystery remains unsolved. But two new studies in the Astrophysical Journal suggest that one possible solution could pan out. Perhaps more convincingly, the solution — called Alfvénic waves — might explain how the fastest particles streaming out from the Sun attain such high speeds.

Alfvénic waves are oscillations that move along magnetic field lines like the vibrations in a plucked guitar string. They were first suggested as a driving force behind both the corona’s heat and the acceleration of the fast solar wind in the 1940s, but they weren’t observed until 2007, when a team of astronomers including Scott McIntosh (High Altitude Observatory, National Center for Atmospheric Research) caught sight of them by using the Coronal Multichannel Polarimeter, then at the National Solar Observatory in New Mexico. Last year, McIntosh and his colleagues discovered these waves permeate both the corona and the transition zone between the corona and the chromosphere.

Now, two independent teams have used observations by the Hinode spacecraft to cement the role these magnetic ripples play on the Sun.

Both teams used Hinode’s Extreme Ultraviolet Imaging Spectrometer to observe a hole in the corona over the Sun’s south pole. In coronal holes the Sun’s magnetic field lines stream out straight, instead of curving back down again in big loops. It’s from these regions that the particles that make up the fast solar wind stream forth, whizzing through space at 800 kilometers per second.

The astronomers observed spectral lines from the ionized gas in the coronal hole. The corona’s spectral lines can look wider due to the movement of hot, ionized gas along the line of sight. This extra line broadening correlates directly to the presence of Alfvénic waves, because the magnetic waves slosh the ions at a velocity that depends on the waves’ energy. 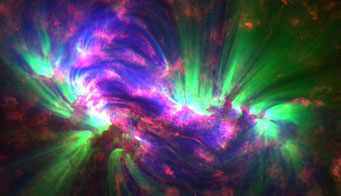 Erupting jets of gas show green in this false-color image by NASA's Solar Dynamics Observatory. Such jets could help heat the Sun's atmosphere, although researchers debate how much of a role they actually play.

The two teams used this line broadening to measure how much energy the Alfvénic waves carry at different heights in the corona. They both found that the wave energy dropped off rapidly within the lowest quarter or so of the solar atmosphere, suggesting that the energy is somehow being dumped into the corona’s lowest region, where temperatures already reach 1 million kelvin. This energy would then be conducted by particle motion upward and outward. One team went on to calculate that the energy dissipated could provide up to 70% of that needed to heat the polar coronal hole and accelerate the fast solar wind.

The team is quick to point out that the results only give an upper limit — the lower limit is still zero. Plus, coronal holes are cooler than other parts of the Sun, and it looks like the magnetic waves deposit more energy in the cooler regions than in the atmosphere’s warmer parts at the heights both teams observed. How much Alfvénic waves could contribute to the corona’s temperature overall isn’t clear.

McIntosh says he’s excited that people are probing this enigmatic energy source in the Sun’s atmosphere. But while he’s convinced the waves must have an impact, he’s not so sure they’re needed to heat the material in the coronal holes — jets shooting up from the chromosphere might do that just fine. Riding these jets, the Alfvénic waves could then accelerate the jet-heated ions and send them rocketing outward into space.

Daniel Savin and Michael Hahn (both of Columbia University), two of the 70%-paper coauthors, say they don’t think outflows from below can heat the corona enough to match observations without the additional wave energy. Despite the disagreement, all the researchers agree that there’s no clear explanation yet for how the magnetic waves lose their energy to the corona.

These are only some of the ideas running amok. Other researchers favor “nanoflares,” bursts of energy released when magnetic field lines snap into new configurations. And a recent paper in Nature took the fact that the Alfvénic waves rotate and ran with it, suggesting “magnetic tornadoes” could channel energy into the corona. What the final answer is remains unknown.

Has anyone investigated whether some form of hydrogen (proton) fusion might be occurring in the corona? Needless to say, the mechanism would be quite different from the PP or CNO reactions in the core. I was wondering whether a proton's magnetic dipole (either intrinsic, or the particle's tight spiral around a magnetic field line) could be "pumped up" enough (via RF?) that a combination of that dipole and a moderate-speed head-on collision (with occasional antiparallel orientations) along a magnetic field line could result in bursts of fusion? In the corona, the gas could be thin enough that random collisions would not interfere with the dipole "pumping" and alignment, and it might not take much energy production to really heat it up. Would the end product be deuterium and gamma rays? Could enough deuterium be produced to be detected?

I may be all wet on this, but if it's plausible, I would think this would be much easier to duplicate on Earth than the brute force temperature and density of current controlled fusion attempts.

That’s an intriguing suggestion Phil. It prompted me to look up some info on how the universe is thought to have aquired it’s Deuterium in the Big Bang models. The proton-neutron fusion reaction producing Deuterium is said to have occurred when the biggest of all fireballs had cooled to 10^9 K and the baryon density was down to near 10^-5g/cm^3. I wonder what temperatures and pressures occur in the corona of the sun and other stars? If any Deuterium is produced in the sun’s corona then even more should be produced in the coronas of even hotter stars, and there would be a Deuterium Problem to add to the Lithium Problem discussed only a few weeks ago. Rod, do you copy?

Well, the whole idea is that it's not the temperatures and pressures found in the core, but a different mechanism (I'm thinking of magnetic attraction plus magnetically-mediated head-on collisions?). There's still the issue of whether this would produce noticeable amounts of deuterium (a little bit of fusion might go a long way heating a thin corona). I never took any courses in nuclear physics or quantum mechanics, so I'll admit my knowledge in this area is rather incomplete.

Phil my thinking was based on the fact that fusing a proton with a neutron is easier than fusing two protons together, but further reading informed me that the neutron has a short half life of only a little more than 10 minutes, therefore the flux of free neutrons in the sun’s corona would be many orders of magnitude smaller than that of completely ionized protons. But whichever mechanism drives your suggested coronal fusion, you’d still need to overcome the repulsive force between a proton and a rare free neutron or the even larger forces between two protons. When protons fuse the reaction output is a deuterium ion, an electron and a neutrino. Could an excess of deuterium be measured in the corona as opposed to the sun’s cooler chromosphere? If so, your idea would be testable.

Well Bruce, that's the crux of the problem. Is there a way to persuade two protons to fuse (producing deuterium) without the brute force method of high densities and temperatures found in a stellar core? First one to figure it out gets a trip to Stockholm! My line of thought has been that a "pumped up" magnetic dipole aligned by magnetic field lines plus moderate speed "head on" collisions might do the trick. Just trying to think "outside the box" here.

P.S. wouldn't it put out an antielectron (positron) instead of an electron?

Right Phil, I should have written positron, which then promptly finds an electron to annihilate with, producing the energy gain from the reaction. Perhaps photons from positron-electron collisions could be discovered in the sun’s corona. In the core, the density makes for lots of collisions, while the temperature provides the momentum to overcome the repulsive forces. Most collisions are not sufficiently “head-on” as you put it, and the protons bounce off of each other. A nuclear astrophysics textbook I have calls this the reaction cross section. To use a baseball analogy, to hit a home run the batter has to hit a round ball with a round bat squarely, that is very close to the centerline of both ball and bat. As protons flow around in the corona’s magnetic fields they would be mostly moving in parallel I would think, but there still might be an occasional fusion event at sites were the field lines converge. I’d like to see other input on this discussion. Is there a nuclear astrophysist in the house?

I guess there isn't anyone in the house who can answer these questions, or else they're all busy doing the calculations in hopes of publishing first! Anyway, I hope this discussion will lead someone qualified to do the sums to think outside the box for ways that proton-proton fusion might just be happening in the solar corona, and whether that mechanism would be a much easier way to achieve controlled nuclear fusion on Earth.

Doesn't the Sun produce measurable gamma radiation? That would be the wavelength range expected of both the fusion itself and of electron-antielectron annihilation, beyond any amount leaking from the core. Plus, there should be detectable deuterium (as discussed earlier), unless there is a mechanism to have the Sun swallow it. We'll just have to see if someone can pick this up and run with it.

That’s quite possible Phil. I too regret that this story will likely be dropping off the list without our receiving any help from more knowledgeable readers. Well, if someone comes out with coronal based “warm” fusion or deuterium production at least you and I will know that you proposed it first.