We Don’t Really Know When the Sun Rises

Hundreds of sunrise and sunset times reveal that there’s something amiss with our calculations.

Every 24 hours, most of us plunge into darkness. We ride the whizzbang merry-go-round of our planet as it turns, racing 1,675 kilometers per hour (1,041 mph) over the horizon and headlong into night. Lest we lose ourselves in the star-speckled blackness — or, as is increasingly true for so many, in the sickly blaze of artificial lights — this ride carries us around and into the dawn again with dependable regularity.

After millennia attuned to this cosmic clock, you would think we’d know precisely when the Sun rises and sets. But Michigan Tech dissertation work by Teresa Wilson (now at the U.S. Naval Observatory) suggests that our estimates are often off by 1 to 5 minutes.

Conventionally speaking, sunrise and sunset are defined as the moment when the top of the Sun’s disk is on the horizon. If we lived on an airless body, we could calculate when this moment happens with simple geometry and call it a day. But light doesn’t travel from our star to our eye in a straight line. Sunlight’s path bends slightly when it hits Earth’s atmosphere, an effect which strengthens as the light burrows deeper into the increasingly dense atmosphere. This bending effect is called refraction, and it’s strongest at the horizon.

All publicly available calculators that Wilson could find assume an angle of refraction at the horizon of 34 arcminutes (denoted ʹ), or a little more than the size of the full Moon. This value may have come from Isaac Newton in the 1600s; Wilson found it cited as a standard as early as 1865. But using a single refraction angle doesn’t account for different meteorological conditions from location to location — in essence, we’re saying things are the same in July in Hawai‘i as they are in January in Alaska, she said January 8th during her presentation at the winter American Astronomical Society meeting in Seattle. Nor does this approach take into account how the observer’s altitude might change things.

Wilson decided to find out just how good our sunrise and sunset estimates are. She scoured published and unpublished data for every record she could find, ultimately amassing 251 sunrises and 514 sunsets from 30 different geographic coordinates, over both water and land horizons. About 600 of these came with weather data, which she fed into three different refraction models of varying complexity; for the others, she had to settle for the 34ʹ.

She found that, overall, predicted times varied in accuracy by location and season, with sunrise times over land generally being early in the summer months and late in the winter. Summer showed the largest discrepancies, probably due to the pronounced refractive effect that the large temperature difference in the atmosphere has during those months. Mirage effects due to cold air topped by warm over water horizons also exacerbated lags in sunset times throughout the year, sometimes by up to 5 minutes. Accounting for the observer’s altitude above the horizon did notably improve predictions for water horizons, however.

Furthermore, the more complex refraction models that incorporated meteorological conditions didn’t do a better job: Their inherent, limited assumptions about the behavior of the weather layer in Earth’s atmosphere, called the troposphere, led to them congregating around the 34ʹ value. Regardless of model, she concluded, sunrise and sunset times can’t be reliably predicted to better than 2 minutes.

Two minutes might sound inconsequential, but Wilson noted that, if GPS fails, sailors will use celestial navigation. “Most sailors will tell you that they can get their position with celestial navigation to within 1 nautical mile,” she said. But if part of that calculation involves sunset, “1 minute of time turns into 15 nautical miles of error.” Knowing precise sunrise and sunset times could also benefit observers, both amateur and professional. A better understanding of how the atmosphere bends light on the horizon would affect moonrise predictions, too.

Want to see the Sun go dark? Watch our webinar to learn how to plan for a solar eclipse expedition.

34' is a little more than the size of the Moon, not half the size.

Bah, darn Babylonians! That's what I get for writing with a cold. Thanks. 🙂

Jean Meeus, Astronomical Algorithms (1991) presents some interesting information on the issue of rise, transit, and set times as well as refraction formula (15.3) in Chapter 15, Atmospheric Refraction. These algorithms use spherical trigonometry to describe the shape of the Earth, unlike some groups on YouTube today who promote alternate concepts about the shape of the Earth :).

There are a couple of oversimplifications in this report.

The Earth's rotation speed at the equator is 1670 km/hr. At other latitudes you need to multiply this speed by the cosine of your latitude. So at 45 degrees north or south latitude you're only spinning at 1180 km/hr (at the equator, cosine 0 = 1; at the poles, cosine 1 = 0).

One minute of the Earth's rotation time equals 15 arcminutes of longitude. This is 15 nautical miles at the equator, but a shorter distance at higher latitudes. For two points of different longitudes but at the same latitude, the difference in longitude multiplied by the cosine of the latitude will give you the distance between those two points.

For example, at 45 degrees north or south latitude, two points separated by 15 arcminutes of longitude are 10.61 nautical miles apart.

Hi Anthony, can you explain why this matters for calculating the sunrise or sunset? Does it mean that calculations about sunrises or sunsets are off at higher latitudes? I am asking as a journalist working on a story about the fall sunsets in the Arctic.

Anthony, you said "One minute of the Earth’s rotation time equals 15 arcminutes of longitude. This is 15 nautical miles at the equator, but a shorter distance at higher latitudes."

I see you have studied spherical trigonometry and the slight flattening used from the equator to the poles that provides accurate results based upon a *round planet* 🙂 Hope you enjoy the upcoming total lunar eclipse.

While the original dissertation and this article call attention to some little-known facts about sunsets, the genuinely critical points have been missed

Sunrise and sunset times have been tabulated as key data in calendars and almanacs for centuries and especially since the early 20th century. The numbers that we all quote so routinely are the result of a STANDARDIZED calculation of a largely fictitious pair of events. The calculation assumes 34 minutes of arc of refraction (and 16' for the Sun's semi-diameter yielding a net, fixed value of 50 minutes of arc), and that refraction number is the focus here. But much more importantly, the standard calculation assumes an observer who can see the sea horizon or a large lake horizon (or equivalent, like a dry lake) AT sea level with his or her eyeball resting right at ground level. These are conditions which almost never occur. If an observer is 100 feet above ground, the visible sea horizon is depressed downward by 10 minutes of arc (a correction known as "dip" to navigators). This changes the times by about 60 seconds in mid latitudes. And of course, the vast majority of observers cannot see anything resembling the sea horizon or a lake horizon in the first place! So what does it MEAN when we quote the time of sunset in Denver, for example, based on this standardized model of sunset? There's nothing like the sea horizon. Depression of the horizon can't be quantified. Mountains and other topographic features determine the actual disappearance of the Sun. Atmospheric pressure at altitude is lower and therefore mean refraction is different. The tabulated sunrise/sunset times are quite simply, a standardized, legally-observed estimate, nothing more. We can easily produce more accurate numbers using proper physical models, and some people do so for simulation work and for detailed forensic analysis in accident cases.

(continued)
Why, then, do we have these standardized numbers for sunrise and sunset? The answer is mundane, earthly: for data sorting and for legal purposes. Legal reasons are obvious enough. All around the globe there are public venues, like parks, that open and close based on the tabulated time of sunrise and sunset. Rather than fussing over astronomical details, the standardized computation provides a simple, unambiguous answer that everyone can agree on.

The data sorting question might be less obvious. When does the night end? Consider this coming Sunday night/Monday morning. It's going to be bitter cold here in New England, and we would like to know what the low temperature for the night will be. It is normal and expected in meteorology that the night is counted from sunset to sunrise and a full "day" is counted from one sunrise to the next. The overnight low temperature this "Sunday night" is currently forecast to be 7 degrees F where I live. That temperature refers to the temperature just before dawn, which by most calendrical reckonings is Monday morning. The standardized computations of sunrise and sunset allow us to create "bins" for data that fit the cycles of the weather. This meteorological sorting of data is the primary origin of the standardized computation of sunrise and sunset times. The exact, observable instant of sunrise is irrelevant.

Frank, I was waiting for you to comment on this story.

For about a month before and a month after the equinoxes, I can see the Sun rising over the ridge of Potrero Hill from the back steps of my home in the Mission district of San Francisco. I enjoy noting the time and azimuth of sunrise. It's about 15 +/- 3 minutes after the official sunrise time, not surprising since the ridge is higher than my back steps. And, on the equinox I see the Sun rising at azimuth 92 degrees, because the Sun has already risen above the idealized horizon and has moved that far south of due east.

It's fun to live on such an interesting planet, and I'm grateful for the atmosphere. 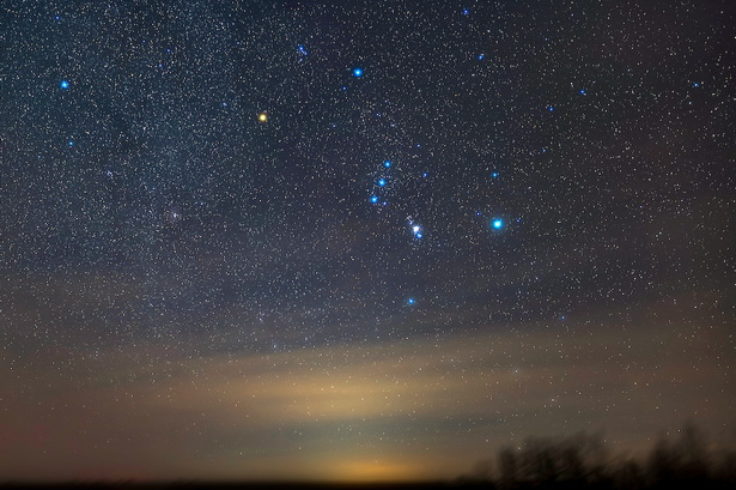