It's no secret that the James Webb Space Telescope has fallen on hard times. The U.S. House of Representatives recently released its 2012 appropriations bill, proposing to cut NASA's funding to $16.8 billion. This amount is $1.6 billion less than last year and $1.9 billion below what President Obama had requested. The bill specifically eliminates funding for the James Webb Space Telescope (JWST), the Hubble Space Telescope's successor, citing its higher-than-expected costs and "poor management." 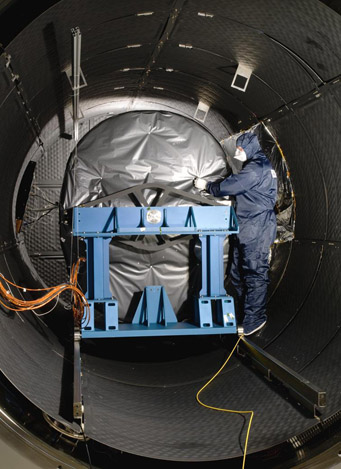 NASA's Goddard Space Flight Center in Greenbelt, Md. is managing the overall development effort for the Webb telescope. The Mid-Infrared Instrument is an international collaboration between NASA and the European Space Agency. Its focal plane modules, related electronics and software were built at JPL. The instrument's cooler is being built by Northrop Grumman Space Technologies in Redondo Beach, Calif., and managed by JPL. The instrument's optics are being built by an international consortium of European astronomical institutes.

All the same, preparations for the launch of the JWST — now scheduled for 2018 — seem to be on track. Astronomers at the U.K.'s Rutherford Appleton Laboratory (RAL) have finished testing the Mid-InfraRed Instrument (MIRI), one of the four devices that will analyze the light collected by the Webb telescope's 21-foot-wide (6.5-m) main mirror. The RAL engineers subjected the MIRI to extremely low temperatures — – 388°F (40 kelvins) — for 86 days, simulating conditions in space.

By looking at infrared light from 5 to 28 microns in wavelength, MIRI will observe faraway comets, the formation of the first stars, and other deep-space objects obscured by clouds of interstellar dust. MIRI also includes a spectrograph, which can tease apart the light emitted by these distant objects and allow astronomers to learn what elements might be present. MIRI can even use its infrared vision to explore how supermassive black holes form in the centers of galaxies that emerged early in the universe's history. 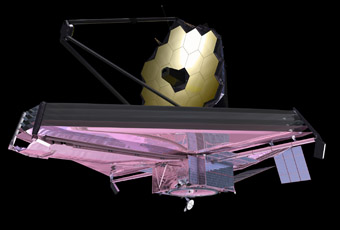 Despite the project's technical successes, the James Webb telescope's future is not secure. The Hubble Space Telescope won't last forever, and astronomers have been worrying that the loss of the JWST — planned as Hubble's successor — would mean a decline in American space science for many years. There are hints, though, that the project may survive. The JWST team has reviewed its budget and come up with a way to save the scope. "The new plan has undergone independent review within the agency and by an outside team of experts to ensure adequate levels of both cost and schedule reserves in the appropriate years to successfully complete JWST development," says Eric Smith, deputy program director for the JWST. Congress will review the new cost-saving strategy in the future.

But how could project managers have botched the budget in the first place? "JWST was seriously undercosted when it started because NASA was at that time under the 'faster-better-cheaper' mantra and the administrator [Daniel Goldin] was its big promoter," says George Rieke (University of Arizona), MIRI science leader. "It has been hard to get to reasonable costing given that start."

The Appropriations Committee's cuts were proposed in part because of the Independent Comprehensive Review, a study called for by Senator Barbara Mikulski of Maryland. But the study was not all doom and gloom. While it concluded that the program's budgeting and management were flawed, it also found that the science and technical achievements had so far been excellent.

Updates continue to trickle in. An August 22nd report by Nature magazine's Eric Hand notes that NASA managers want to fund the JWST with money pulled not only from its space-science division, but also from its aeronautics, human spaceflight, and technology development divisions. NASA needs an extra $1.5 billion over the next three years to complete the mission.

Some people believe that not launching the James Webb Telescope could have ramifications far beyond NASA, eroding the U.S.'s standing in the astronomy world. "If we default on our commitment to JWST, then our international partners' confidence in us will suffer," says Bethany Johns, the John Bahcall Public Policy Fellow at the American Astronomical Society. "The world will see an inability for the U.S.A. to follow through on its astronomical commitments."

Bethany Johns is right: the world will see an inability for the U.S.A. to follow through on its astronomical commitments, all the more that now it is incapable - for how many years ? - to send a crew in space.

A voice from Australia. I would think, unhappily, that USA is already seen as having that inability. Space Shuttle gone, no replacement yet, etc. Seems that politics is in control. Hubble, however, has been and still is magnificent.

Goldin got it off to a crippled start and the tea baggers in Congress are out to euthanize it. I don't know what NASA can legally do in the way of shuffling funds, but if it can't rob peter to pay paul, we can kiss the JWST goodbye.

NASA needs to control expendetures. Extreme cost overruns are not acceptable. Contractors need to be forced to live within their estimates. The cost of this project is absurd.

Can we get our TARP bailout tax money back from the too big to fail private banks and private companies, to fund it? It reminds me of the superconducting super collider that those Congressional geniuses cancelled. The Europeans then took over high energy physics. The Congress keeps it up, and the best and brightest in science will no longer come to the USA, and our economy will slowly spiral downward. Maybe Congress will sell it to China or Germany. I'll bet China would love the latest technology, unless they already stole it over the Internet for free.

I deeply hope that the JWST will be built and launched, and will have a long and successful mission. A few days ago I was talking with a friend about the merits of the space program -- it was hard for me to explain why launching a big space telescope is worth his tax dollars. I believe we need a charismatic media star the likes of Carl Sagan to once again inspire the general public to support astronomy and the space program.

Perhaps we could add Lasers or something and tell congress that it was a new weapon, I'll bet they would fund it then. They would probably come up with a Trillion dollars because we all know that no amount of money is too much for a good way to kill people.

The JWST highlights why NASA needs to get away from such extravagent, complicated and expensive projects. Pulling money from other areas for one project will also have long lasting effects.

One good way to help fund the JWST would be to abandon the foolish and extremely dangerous and COSTLY idea of sending a manned mission to Mars.

There seems to be a desperate attempt to find LIFE on Mars just to try to prove that Life can bubble out of any mud puddle that has the right temperature and ingredients.

I submit that that notion is as scientifically foolish as the old alchemists efforts to stew gold out of cheaper materials. They needn't have tried that then and they needn't try to prove now that Life self-generates from the right recipe.

Why? Because, IT JUST ISN'T DONE THAT WAY.