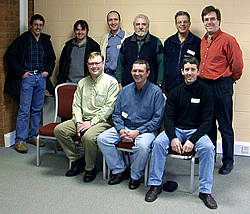 On February 21st, the Marston Vale Millennium Country Park in Bedfordshire, England, provided the venue for Q-2004, the second symposium of the QuickCam and Unconventional Imaging Astronomy Group (QCUIAG).

Drawing speakers and exhibitors from the UK, Slovakia, Norway, The Netherlands, Switzerland, and the US, the event enabled an eager audience to savor the collective wisdom of many of the key players in this very popular and rapidly developing discipline of low-cost electronic imaging. Those not wishing to attend the lectures could shop for telescope equipment, see demonstrations of members' projects, or chat with representatives from the Bedford and Milton Keynes Astronomical Societies. 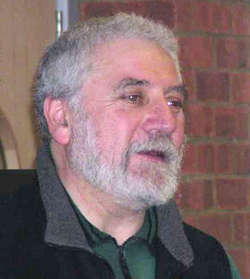 Formed in October 1998 by biologist Steve Wainwright, QCUIAG flourishes as an online forum for exchanging ideas, experiences, and results of astronomical imaging with unorthodox devices. Today, the group's worldwide membership exceeds 5,300, with representatives from more than 40 countries. For many attending Q-2004, this was their first opportunity to meet people with whom they'd been working online for years.

QCUIAG’s dedicated army of engineers and electronic hobbyists freely publish their research on how to modify inexpensive computer webcams, digital cameras, and surveillance devices for astronomical use. But what if you have no skill with a soldering iron? Fortunately for the rest of us, Rui Tripa of Portuguese company Perseu was on hand to display their latest offering of ready-to-use cameras, while Julian Palmer provided "while-you-wait" webcam conversions throughout the day. 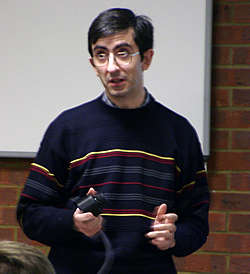 In parallel with hardware development, QCUIAG’s talented programmers continue to release better, more powerful programs to ease the task of acquiring and processing images of solar-system and deep-sky objects. One of the most popular of these is Peter Katreniak's K3CCDTools. Peter traveled from Slovakia to attend the event and tantalized the audience with a preview of the many enhancements to his soon-to-be-released K3CCDTools2.

The challenge of capturing stunning, high-resolution planetary images under unfavorable seeing conditions was ably demonstrated by renowned astro imager Eric Wai-Kin Ng of the Hong Kong Astronomical Society. Eric was unable to attend in person, but true to the technical savvy of QCUIAG members, he submitted a video presentation of his equipment and techniques. 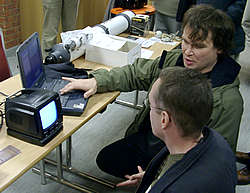 Andrew Sprott gives a demonstration of his freeware Network Telescope Control (NTC) software. It permits remote control of a Meade LX200 or Autostar system over a wireless network, with a range of up to 100 meters. While still under development, the software gave an impressive demonstration of remote focusing and slewing of an ETX-90EC.

Another notable lecture came from English observer Robin Leadbeater, who developed an innovative strobe technique in order to capture the rapid flashes of the Crab Nebula pulsar. While this has been achieved with professional telescopes of 1-meter aperture and larger, Robin was able to produce similar results with his 200-millimeter Cassegrain telescope.

Despite the cancellation of an evening observing workshop due to bad weather, this year's QCUIAG convention was proclaimed a resounding success by organizers and attendees alike. Within hours of returning home, the relevant Internet discussion groups were buzzing with renewed vigor, and plans have already been set in motion for the next event.