Weighing Black Holes with a Thermometer

When it comes to accurately weighing the supermassive black holes that lie at galaxies’ centers, there has been only one method: tracking the motions of stars and gas in the central region to calculate the mass of the unseen body that causes them to move that way. But for scientists trained to test and re-test results in as many ways as possible, having just one technique to measure something that’s not even directly detectable does not sit well.

But now there’s a new way to weigh. First suggested 10 years ago by Fabrizio Brighenti (University of Bologna, Italy) and William Mathews (UC Santa Cruz), the technique depends on the peak temperature of gas in the central region. The gas is compressed by the black hole’s gravitational influence and becomes hot enough to glow in X rays. 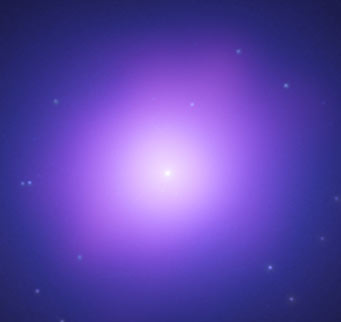 Composite X-ray and visible-light image of NGC 4649 from Chandra and Hubble data, respectively. The gas around the black hole, more than 12 million kelvins hot, does not produce an overwhelming bright central point because of the black hole's dormancy.

Using this temperature and the gas’s entropy (a quantity related to temperature, density, and a few other physical constants), Philip Humphrey (UC Irvine) and his colleagues calculate that the supermassive black hole at the center of the giant elliptical galaxy NGC 4649 has a mass 3.4 billion times that of the Sun. The value agrees well with previous estimates for the black hole’s mass as one of the largest in the local universe. It also outweighs Sagittarius A*, the Milky Way’s own central black hole, by more than 1,000 times.

The X-ray method works particularly well for galaxies like NGC 4649, which lies 50 million light-years away, because the material in their cores is not as "stirred up," explains Humphrey. In an active core infalling and ejected material interact more, and these disturbances make it difficult to distinguish the origin of temperature spikes, he continues.

In contrast, the gas in NGC 4649’s center appears to be in hydrostatic equilibrium — a state of balance between gravity pulling in and gas and radiation pressure pushing out. Astronomers refer to NGC 4649’s black hole as “quiescent,” or quiet, because it’s not swallowing the gas close by.

“There seems to be an observed correlation between the masses of central supermassive black holes and the galaxies they exist in,” Humphrey explains. But without verified mass measurements, scientists have only been able to conjecture what that connection is. Pinning down supermassive black holes’ masses will help astronomers to make more general statements about their occurrence and help test models of galaxy formation.

See the Chandra press release.The study will appear in the Astrophysical Journal.

"It also outweighs Sagittarius A*, the Milky Way’s own central black hole, by more than 1,000 suns."

"It also outweighs Sagittarius A*, the Milky Way’s own central black hole, by more than 1,000 times."

The method described in this article cannot work. The following article explains why: