When you look at the cratered, grooved face of Vesta, it’s easy to understand why the science team behind NASA’s Dawn mission is exhilarated. It took scientists and engineers a decade to plan and execute the mission, and now it is time to pop the champagne bottles. Dawn is orbiting Vesta, spiraling down closer to it week by week, and sending home stunning landscape images of one of our solar system’s oldest rocky residents. 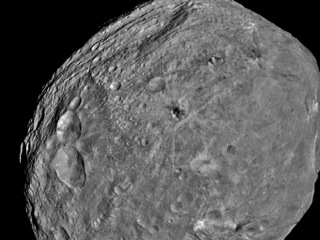 NASA's Dawn spacecraft obtained this image of the giant asteroid Vesta with its framing camera on July 24, 2011. It was taken from a distance of about 3,200 miles (5,200 kilometers). Dawn entered orbit around Vesta on July 16, and will spend a year orbiting the body. After that, the next stop on its itinerary will be an encounter with the dwarf planet Ceres.

Dawn is a Discovery-class program, making it one of several small, low-cost missions intended to unlock specific secrets of our solar system. Dawn is Earth’s first emissary to a large asteroid. The craft will explore two alien worlds: Vesta through late 2012, and Ceres in 2015. Both formed from the disk of material that surrounded the newborn Sun 4.6 billion years ago, and, presumably, they retain many of this material's original characteristics.

The craft’s advanced ion-propulsion system drew comparisons to Star Trek at the press conference. Unlike other spacecraft, Dawn does not use a chemical rocket but beams out a very thin stream of high-speed xenon ions to give the vehicle its thrust. Although the ion engine is low-power it is very efficient, and in space it can make up for the weakness of its push by running for long periods of time.

After completing a 1.7-billion-mile interplanetary journey, Dawn slipped smoothly into orbit around Vesta. Chief engineer Marc Rayman (JPL) said insertion was just another day for his team. Most of the team was at home during the actual event itself, he said. “I was out dancing,” he added.

Since then, Dawn’s two framing cameras have been sending back exquisitely detailed images of large, rimless craters, long strips of mountainous land, and jagged ridges. The first full-frame image, taken from an altitude of 3,200 miles (with the north pole at upper left here), shows a heavily cratered northern hemisphere and a relatively smooth southern hemisphere, separated by a heavily grooved equatorial region. The team also posted an animation that shows a full, 5-hour rotation of the asteroid.

Principal investigator Christopher Russell (University of California, Los Angeles) thinks the south polar region was hit by a very large impactor very early in Vesta’s life. This impact could have crushed the asteroid’s crust, creating tectonic features that slip over one another to form ridges. The impact must have knocked a huge volume of rock out of the southern hemisphere, some of which probably accounts for the class of meteorites found on Earth that have Vesta's surface composition. 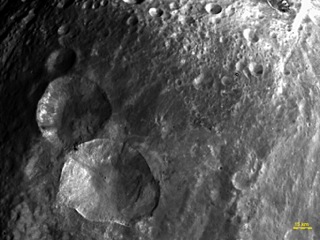 In this image, obtained by the framing camera on NASA's Dawn spacecraft, a set of three craters, informally nicknamed "Snowman" by the camera's team members, is located in the northern hemisphere of Vesta. The image was taken on July 24, 2011, from a distance of about 3,200 miles (5,200 kilometers).

The craters — particularly a trio nicknamed “the snowman” in the equatorial region — have attracted the science team’s attention. They are shallow, filled with debris, with walls that drop sharply from the asteroid’s face. The walls have a similar appearance to small, young craters on the Moon, but Russell says that the aging process could be slower on Vesta. Its low gravity allows ejecta to fly free rather than falling back as thick blankets around larger craters.

In addition to the framing-camera image, the team unveiled a surface-temperature map of a small area in the northern hemisphere, charted by Dawn’s infrared instruments. The map shows colder and warmer areas probably because of an assortment of minerals on the asteroid’s surface.

The images and data that the team unveiled yesterday was only a preview of what the mission is likely to accomplish. After Dawn reaches its science orbit (1,700 miles from the surface), the camera, spectrometer, and infrared instruments will help scientists map the asteroid’s terrain, gravitational field, and mineral composition. By early 2012 Dawn will be dipping to 110 miles from the surface for much closer looks.

These images and data are really exciting. We're getting to know the appearance and history of this little world for the first time! The hypothesis about the big south polar impact, the tectonic ridges, and Vestan meteorites on Earth is fascinating. There's so much more to look forward to from the Dawn mission, but already great thanks and congratulations are due the team.

These images and data are really exciting. We're getting to know the appearance and history of this little world for the first time! The hypothesis about the big south polar impact, the tectonic ridges, and Vestan meteorites on Earth is fascinating. There's so much more to look forward to from the Dawn mission, but already great thanks and congratulations are due the team.