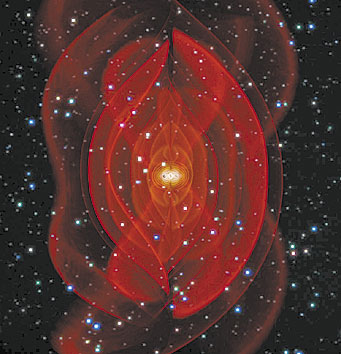 In this frame from a simulation by NASA's Columbia supercomputer, red indicates gravitational waves thrown off by a closely orbiting pair of black holes at center. In this simulation, unlike what's expected in reality, neither hole is rotating, which is why the waves emerge symmetrically here.

It’s hard to kick a monster around, especially when the beast weighs millions or even billions of times the mass of our Sun.

But in recent months, computer simulations by five independent groups have shown that something astonishing can happen when two supermassive black holes spiral together and combine in the aftermath of a galaxy merger. Just before the black holes coalesce, they fling away extremely powerful gravitational waves — ripples in the fabric of spacetime predicted by Einstein’s general theory of relativity. The energy these waves carry off is millions of times greater than the energy of a supernova or gamma-ray burst. And they carry momentum too. If they're beamed preferentially in one direction, the merged black hole experiences a recoil so violent that it can go careening in the opposite direction at up to 4,000 kilometers per second — fast enough to escape its host galaxy.

Few physicists take issue with these simulations, which are robust and likely to be correct. But something doesn’t add up. When astronomers peer deep into the hearts of large galaxies, including those that have gone through major mergers, they always find a supermassive black hole right there. Some mechanism must prevent merging black holes from getting kicked out of their galaxies.

Tamara Bogdanovic, Christopher Reynolds, and Cole Miller of the University of Maryland have proposed a way out of this conundrum so that merging supermassive black holes can stay put. Bogdanovic and Reynolds outlined their solution during a press conference at the spring 2007 American Astronomical Society meeting in Hawaii.

The key factor is spin. In the computer simulations each black hole in a pair is spinning fast, as expected in nature, with the spin axes oriented in random ways with respect to each other. Differing spin orientations cause the gravitational waves to spurt in a preferred direction. So does having both spin axes lying in the pair's orbital plane.

But Bogdanovic and her colleagues note that most actual galaxy mergers involve two gas-rich galaxies. A billion solar masses of gas will sink to the center of the merged galaxy and collect in a disk roughly 1,000 light-years across. The black holes orbit each other within this disk, and each monster draws gas from the disk to form a smaller accretion disk. These much smaller disks will torque the spin axes of the two black holes, causing both their axes to realign perpendicular to the orbital plane.

“This process is very efficient, and it happens in only a few million years,” says Bogdanovic. But the black holes whirl around each other for at least 100 million years before spiraling all the way in and colliding. By that time the spin axes have been realigned, and in the new orientation, the recoil is reduced to less than 200 km per second — much too slow for a merged black hole to escape a galaxy’s gravitational clutches. “Ejection of supermassive black holes should not be common,” says Bogdanovic.

At the same press conference, Erin Bonning (Paris Observatory, France) and her colleagues provided additional observational support for the lack of runaway black holes. They examined spectra of 2,600 quasars from the Sloan Digital Sky Survey to look for signs that accreting supermassive black holes are moving at high speeds with respect to their host galaxies. They found no convincing examples. “It seems likely that some mechanism is in play that doesn’t allow for large kicks,” says Bonning. “This is an interesting nondiscovery.”

Insight Lander Touches Down on Mars

Gloves Come Off in Fight to Save Hubble