Researchers have unexpectedly found radio emission from a supernova that went unnoticed when it exploded more than a year ago in the galaxy M82 in Ursa Major. Its visible light was apparently blocked by dense dust in the galaxy's central region. By following the radio emission created as the shock wave continues to expand, researchers hope to learn about the star’s last few thousand years before it blew up. 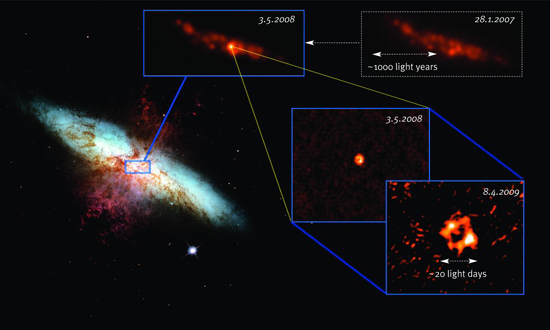 The galaxy M82 as seen in visible light at left, with glowing hydrogen gas displayed in red. The top-left inset shows the radio emission from the center of the galaxy on May 3, 2008, displaying the intense new source. It is absent on the top-right inset, from January 28, 2007. The bottom-right insets are explained in the third figure below.

The discovery was serendipitous — the team was studying proper motions in M82 and M81 using the Very Large Array of radio telescopes in New Mexico. On reducing their data, the team (led by Andreas Brunthaler of the Max Planck Institute for Radioastronomy) noticed a strong new point source of radio emission near the center of M82 — a smallish, irregular galaxy 12 million light-years away with vigorous star formation happening in its middle. 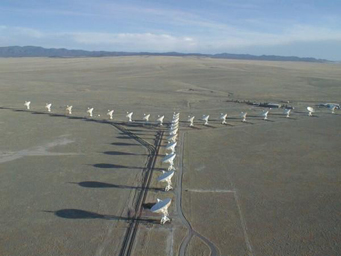 The 27 identical 25-meter radiotelescopes of the original Very Large Array in Socorro, New Mexico can move on rails along three arms, each extending for 13 miles. The signals from the antennas are combined electronically: the final resolution is that of an instrument the size of the arms, while the sensitivity is that of an telescope of an area equal to the sum of the areas of all the telescopes. More dishes are being added at greater distances to create the Expanded VLA (EVLA).

“Most supernovae you only see in the optical,” says co-author Geoffrey Bower (University of California, Berkeley). He says this one went unseen because the star was hidden by particularly dense gas and dust. But Stefan Immler (NASA/Goddard) stresses that it would take an enormous amount of material to hide the accompanying ultraviolet and X-ray emissions as well: “There are many other X-ray sources in the bulge of M82, and these are not absorbed.” Christopher Stockdale (Marquette University) says: “If nothing else, it clearly shows it’s an unusual object.”

You can’t blame other researchers for being slightly skeptical: they haven’t had a chance to check all the UV, X-ray and visible observations that failed to see anything throughout 2008. Even Bower admits, “It’s quite striking that a supernova so nearby is completely obscured in the visible.” 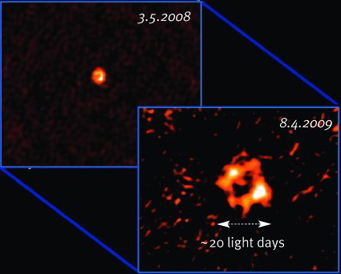 High-resolution radio images show the expansion of the supernova shell between May 3, 2008, and April 8, 2009. It's now a ring. By extrapolating the expansion backward, the researchers can estimate more precisely the date of the supernova explosion to January or February 2008, even though they do not have observations from these months.

But additional evidence that Brunthaler and collaborators haven’t yet published seems to convince even the skeptics that there was indeed a supernova here. It again has to do with the density of material around the star — not the dust and gas giving birth to stars this time, but closer-in material expelled by this particular aging star before it exploded.

Brunthaler and collaborators see the radio source expanding, balloon-like, at the speed expected for the shock wave of a supernova: thousands of kilometers per second, a few percent of the speed of light. The radio waves are synchrotron radiation from electrons in the former star's stellar wind as they get swept up by the expanding blast wave. For this to happen, the star must have blown off a massive wind in the millennia before exploding. The ultraviolet flash of the explosion ionized this material, breaking apart its hydrogen atoms into a plasma of protons and electrons — and these emit the radio as the shock wave hits them and plows them forward. 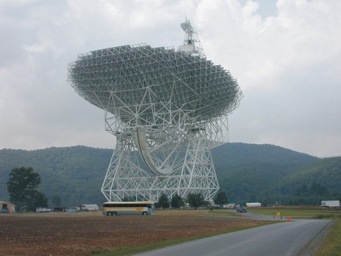 The 100-meter Green Bank Telescope in West Virginia. Data from this telescope and many others were combined with that of the Very Large Array to obtain the high-resolution images of the previous figure. The Green Bank Telescope's moving structure weighs 7,300 metric tons.

Such strong stellar winds aren't seen in the famous Type Ia supernovae used as cosmic standard candles. These blow up when a white dwarf star accretes enough mass to ignite a nuclear reaction that suddenly consumes it. So the aftermath of that kind of explosion should be radio-weak. Strong radio emission is a sign that the blast was caused by the other mechanism for supernovae: the collapse of a large, massive star’s core when it has exhausted all its nuclear fuel. Such stars sometimes emit very thick winds.

The shock wave will thus play back for us a record of the last epoch of the star’s history — in reverse order, and at a thousand times the original speed. As the thousand-times-faster shock wave overtakes the wind plasma, it will emit more or less strongly depending on the plasma's local density. By watching for such variations in the coming years, Bower hopes to see signs of what the star went through during its final millennia.

Here is the team's discovery announcement.

According to my own investigation, thousands of people all over the world get the lowest-rate-loans.com at well known banks. Hence, there's great possibilities to receive a bank loan in every country.