There are hot dogs in the sky. 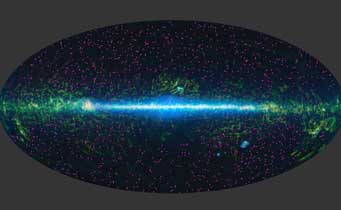 This map from NASA's Wide-field Infrared Survey Explorer (WISE) shows the locations of the roughly 1,000 extremely obscured objects detected by the spacecraft marked by magenta dots. These hot dust-obscured galaxies, or "hot DOGs," are in some cases putting out over 1,000 times more energy than our Milky Way galaxy. Click here for a larger view.

Astronomers have discovered a new class of galaxies in the distant universe. These galaxies are monstrously bright in the infrared — 10 trillion times brighter than the Sun’s average luminosity and at least 10 times brighter than extreme star-forming galaxies. They rival the brightest known active galactic nuclei, or AGNs, where frantically gobbling supermassive black holes spit out jets of plasma.

British and American astronomers discovered the new class of galaxies, called hyperluminous infrared galaxies, in data from the Wide-field Infrared Survey Explorer (WISE). WISE surveyed the entire sky in four infrared wavelengths in 2010, and the project released its full data set this past March.

One of WISE’s main science goals was to find the most luminous, dusty galaxies out there, but WISE project scientist Peter Eisenhardt (Jet Propulsion Laboratory, Caltech) says the new group of galaxies took them by surprise. Instead of showing up in all four WISE bands, the hyperluminous galaxies are invisible in the two shorter wavelengths — 3.4 and 4.6 microns — but bright in the longer ones of 12 and 22 microns. The strong 22-micron emission probably comes from warm dust that is either widespread enough or thick enough (or both) to block emission at shorter wavelengths from the galaxies’ centers, explaining why these objects are invisible in both near-infrared and visible light. For every visible light photon that makes it through the dust blockade, another billion trillion photons are absorbed.

The team found only about 1000 hot DOGs among the roughly 2.5 million AGNs detected by WISE, which were announced along with the hot DOGs in a NASA press conference on August 29th and reported in three papers in the Astrophysical Journal. So far the team has only measured distances for 147 of the hot DOGs using follow-up observations with other facilities, including the Caltech Submillimeter Observatory, but most of the sources cluster around redshift 2 to 3, or within the universe’s first few billion years of existence. 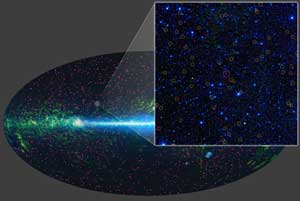 A zoom-in on the region around the first "hot DOG" (in center of box, circled in magenta) discovered by NASA's WISE satellite. Follow-up observations with the W.M. Keck Observatory on Mauna Kea, Hawaii, determined that the light observed left the source when the universe was less than 3 billion years old. The object puts out at least 37 trillion times as much energy as the sun. Click for a larger version.

Cosmos-wide star formation reached its peak during that era, but although the astronomers do detect starlight from the hot DOGs, it makes up less than 10% of the galaxies’ total light — in fact, Eisenhardt says, it’s probably less than 1%. That’s not from a lack of stars: the first of the hot DOGs found, WISE 1814+3412, is making roughly 300 stars a year, a tremendous burst of star formation. But starlight can’t heat dust to high enough temperatures to explain the infrared light, so black hole activity is likely to blame instead.

Gas-guzzling supermassive black holes can produce an intense radiation field that heats dust. But to explain the infrared light pouring out of these galaxies, the central black holes must be either truly supermassive — among the most massive black holes known in the universe — or they are less massive and are gobbling down gas at a higher rate than ought to be physically possible. Eisenhardt and his colleagues consider the latter scenario to be more likely because these galaxies may be at a special, short-lived stage in their evolution.

AGN researcher Rachel Somerville (Rutgers University) agrees that the hot DOG phase is probably short-lived, maybe less than a million years. It could turn on when galaxies collide and merge as part of the natural evolution of galaxies and black holes. According to one popular evolutionary scenario, merging galaxies should spur on star formation and funnel gas and dust toward the galaxy’s center and into the black hole’s maw. That means black hole activity ought to lag behind starbursts, but in hot DOGs the black-hole-blazing activity seems to come as the star formation is just getting started. Why that is remains unclear.

My observation - again we see short-lived activity in remote galaxies that is considered to last perhaps 1E+6 years vs. the big bang age for the universe of 13.7E+9 years old. Data like this is growing in quantity concerning galaxies near the earth and galaxies remote showing evidence of young objects populated in the galaxies.

When the James West Space Telescope (JWST) comes on-line in 2016, we may see some unrepresented imagery that will put these galaxies into sharper focus.

WISE is not the 1st infrared all-sky survey. If these galaxies are monstrously bright in the infrared, why did it take so long to notice them? CH: not sure about the last part, but if all goes well the imagery from the JWST could be unprecedented.

I have not read the papers yet. But I assume they are monstrously bright in the infrared in comparison to not being seen in the visible spectrum that most telescopes like Hubble use. They are 10 trillion times brighter than the Sun in the IR, but are further than most known galaxies.

In the near-IR, Sirius is only the 9th brightest star in the night sky. Red giants such as Betelgeuse, R Doradus, Arcturus, and Aldebaran are all brighter.