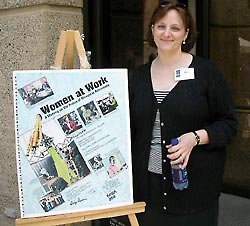 C. Megan Urry (Yale University) was a key organizer for both Women in Astronomy II in Pasadena, California, and the original WIA conference at the Space Telescope Science Institute in 1992.

When asked about women in astronomy, most people feel proud recounting the contributions of luminaries like Caroline Herschel, the first woman to discover a comet, and Annie Jump Cannon, inventor of the stellar-classification scheme. In a sense, that pride is justified. Astronomy has had a long-standing tradition of recognizing women's contributions.

Still, this past weekend at the Women in Astronomy II (WIA II) conference at Caltech, 150 attendees learned that, despite ongoing gains, women have a long way to go to reach fair representation in professional astronomy.

The good news at WIA II began with participation. Rachel Ivie of the American Institute of Physics' Statistics Group showed that the proportion of women in astronomy has shown an overall increase since 1958. Women now earn 22 percent of all astronomy doctorates and make up 14 percent of faculty. Numbers from the American Astronomical Society (AAS) show even more promise — nearly 60 percent of the astronomers in the youngest age bracket (21–23) are women. Astronomers between ages 23 and 28 are almost 40 percent female.

Although things are looking up in the professional world, amateur astronomy has seen much slower gains. According to Sky & Telescope reader polls, in 1979 only 6 percent of subscribers were female. By 2002 that number had grown to 9 percent.

In recent years more "watchdogs" have been put in place in professional astronomy. In 1994 the AAS established a working group to monitor the status of women in the field. Statistics and a quarterly newsletter are available online. The National Science
Foundation also requires that proposals contain a "broader impacts"
section, outlining how the proposed research would help with education or
aid in recruiting underrepresented groups such as women and minorities.

Elaine Seymour, a sociologist from the University of
Colorado, offered hard data on why gender inequalities exist. At WIA II she described the conditions that force men, but more often women, to leave astronomy for other careers. Among the most serious problems are inadequate mentoring, unrealistic demands on time, and the lack of support for astronomers who are trying to start families. The current trend toward short-term or "soft money" positions is another major stumbling block. One AAS-sponsored study details inequitable distribution of rewards — women are less often invited to speak at conferences and get less than their share of awards for outstanding research.

Some of the inequalities may also stem from lack of public outreach opportunities. According to Stephen P. Maran, AAS Press Officer, in his two decades of scheduling press conferences, a principal investigator supporting graduate research is much more likely to allow a male graduate student to speak to a room of reporters than a female. Maran stresses that while there are no "hard" data to support his claim, only his experience, he suspects the reason for the disparity is that the lead scientists are being either "consciously or subconsciously more protective of their female students."

The take-home message from WIA II was that all astronomers everywhere are responsible for ensuring gender equity in the field. In order to counteract the subtle inequities that selectively push women and minorities out of astronomy, everyone needs to pitch in.