An important group of stars may be lying about its age. A new estimate for the Upper Scorpius region suggests its stars may be twice as old as previously thought, astronomers report in an upcoming Astrophysical Journal. If correct — and not everyone’s a believer just yet — the birth date switcheroo would confirm that one sun’s lauded “planet” is probably a failed star (a brown dwarf). The new age could also have implications for planet-formation timelines. 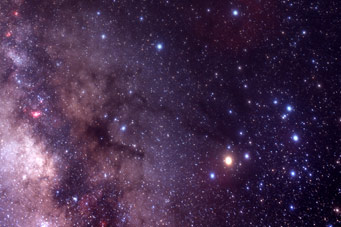 Stars in the Upper Scorpius association (partially shown here in the lower right, with the red supergiant Antares glowing brightly) may be twice as old as previously thought, astronomers suggest.

The astronomers looked at three parts of the nearest association of massive, hot, young stars, the one spanning the constellations Scorpius and Centaurus south of the celestial equator. One section, Upper Sco, includes the well-known red supergiant Antares and the luminous blue stars of Scorpius's head. The team looked at the spectra, magnitude, and colors of dimmer not-quite-done stars — those still collapsing in on themselves before they kick off hydrogen fusion in their cores — as well as massive hydrogen-burning stars, and fitted those observations to theories of how old the stars should be. After considering various possible evolutionary models, the researchers concluded the group is between 9 and 13 million years old, roughly double previous estimates of 5 or so million years (although error bars could push that five up to eight). The new age better matches two other parts of the Sco-Cen association: Upper Centaurus-Lupus (16 million years), and Lower Centaurus-Crux (17 million).

Using stars that haven’t fully collapsed as clocks is notoriously fraught with trouble, notes Tim Naylor (University of Exeter), who has studied Upper Sco before but didn’t participate in the current study. Different models can make age predictions that differ by a factor of two for the same stars, he says. Even the same model can give different ages, depending on which stellar masses and colors you use. “The problem is that you really have little alternative,” he says, because in young groups many of the stars fall into this preemie category.

What’s important about the new study is that the authors looked at a range of stellar types. They analyzed 76 stars between 1.3 and 17 solar masses in Upper Sco using a variety of other teams’ ideas on how stars evolve. All combinations gave older ages, says lead author Mark Pecaut (University of Rochester).

Thomas Preibisch (Observatory of Munich University) disagrees. “The work they present seems to be quite solid and carefully done, but I must say that I am not fully convinced.” He says that because the team didn’t look at lower-mass stars, as he and others have done, their result depends on stars for which it’s harder to estimate ages well. In 2002 Preibisch and his colleagues determined Upper Sco was between 5 and 6 million years old, and he notes that other teams have arrived at the same conclusion.

Pecaut contends that it’s actually stars less massive than the Sun that are dicier when it comes to estimating ages. With massive stars, correlations between hydrogen-burning and pre-burning stars seem to hold up better than for low-mass, cooler ones, although why isn’t clear. The correlation allows astronomers to estimate the preemie stars’ real colors and ages. But their goal wasn’t to repeat Preibisch’s analysis, Pecaut says; rather, they wanted to compare it to solid ages for higher-mass stars. Pecaut notes that the last rigorous attempt to date Upper Sco’s massive stars was in 1989, using computer models from 1981 — and astronomers’ understanding of the physics of stellar interiors has improved a lot since then.

The disagreement is not merely an issue of birthday cards. The Sco-Cen Association is the closest to Earth of its kind (roughly 400 light-years away), making it prime ground for newborn-planet hunting. Astronomers have detected a couple of infrared-glowing companions in Upper Sco that walk the line between planet and brown dwarf, but the objects’ masses depend on the ages assumed for their parent stars. “Essentially these objects cool with age,” Naylor says, “so they can be of low luminosity either because they are old (and have cooled) or because they are low-mass.”

An older age would mean these objects have had more time to cool off, which means they would have higher masses than younger objects at the same temperature. The new age estimate pushes their systems’ birth dates back far enough to suggest that they are 20% to 70% more massive than previously thought — meaning that one of the objects (previously touted as one of a few directly-imaged exoplanets) is probably a brown dwarf.

There’s also the issue of planet formation mechanisms. Astronomers use regions like Upper Sco to determine how long it takes new stars’ dusty disks to dissipate. These are the disks from which planets form. “We find the time for the disk to go — 3 to 5 million years — is much shorter than the time the theorists tell us it takes to form Jupiter — 10 million years,” Naylor says. “So, either most stars don't have massive gas giants (unlikely given the data from the current surveys) or perhaps we have the age scale for young clusters wrong.”

Pecaut and his colleagues concluded less than 19% of Upper Sco’s stars have disks. Whether that fraction would support a younger or an older age is also debated.

"Pecaut and his colleagues concluded less than 19% of Upper Sco’s stars have disks." What that means is, less than 1/5th of the stars are of child-bearing age.