An Observatory with Sails

After working at Sky & Telescope for nearly a decade I got the chance to build the observatory I'd always wanted. On the advice of other observatory owners, I deliberately made it "too large" (at 12 by 15 feet) for the 12½-inch f/6 Newtonian reflector that was to go inside. I've never regretted having the extra space! I also incorporated several other features that make the observatory pleasant to use. 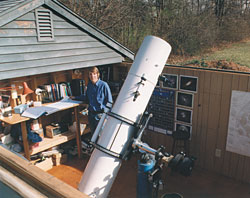 Alan M. MacRobert is pictured here next to his 12½-inch Newtonian reflector inside his suburban Boston observatory. Even when fully deployed, some of the roof hangs over the worktable as protection from dew and wind.

The first is a smooth-running roll-off-roof system. The roof runs on 6-inch steel wheels that have high-quality bearings and deep grooves in their rolling faces designed to roll on angle iron with the corner of the angle pointing upward. This, I'm convinced, is the only way to go for a roll-off roof. Despite the roof's size and weight, I can open and close it by hand (with effort) even when it's loaded with a half ton of snow. The wheels are hard to find; I got them from the von Kamecke Corp. (84 Walnut St., Lawrence, Massachusetts 01841-3122; 800-388-4838). I built the roof with four wheels, but it would probably roll more easily if I had used six.

Because my horizons were already blocked by houses and trees, I built the walls high enough to allow ample headroom under the roof when it's closed. I designed the roof to stop rolling 2½ feet before uncovering all of the floor space. Under this overhang, I built a very tall desk/workbench that puts charts and notes right under my eyes at standing height — a great convenience for reading in dim red light. The overhanging roof shields the desk from wind and dew; it also allowed me to use shorter rails to support the fully extended roof.

"Every observatory gets wasp nests," I was warned by those in the know. Not mine. When the roof is closed, garage-door weatherstripping seals the end of the roof that rolls away. For the other three sides, I stapled stiff, 2-inch-wide plastic screening (the kind used when plastering joints between wallboard) onto the walls to stick up and rub along boards in the roof as it is opened and closed. The screening keeps out insects and wind-driven snow when the roof is closed, while letting in air. Good ventilation is important. I have standard soffit vents, louvered attic vents in the roof's ends, and a ridge vent along the top of the peaked roof. 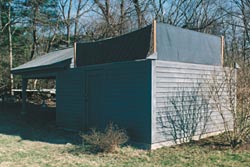 To block light from nearby streetlights and neighbors, MacRobert employs a pair of “sails” that are easily hoisted to extend the northern and western walls of his observatory.

I insulated the south and west walls and the south-facing side of the peaked roof to reduce daytime solar heat gain. The rest was left uninsulated to promote heat loss on the shady sides and at night. There’s a thick rug on the concrete floor, salvaged from a neighbor’s trash, for insulation as well as comfort (and safety for dropped eyepieces).

Trees block out local lights on two sides, but the other two sides face streetlights and houses. To block these lights, I made rectangular sails of black cloth that are strung on ropes held by vertical wooden spars. When the observatory is closed, the sails hang in folds against the walls. When the roof is open, I can hoist the sails in a moment by hauling on three ropes that run through pulleys to lift the bottoms of the spars and tension the sails tight when they are fully up. The 2-by-3-inch spars have big slots down their centers (cut with a circular saw and lubricated with candle wax) that slide up and down on massive bolts sticking out of the walls. When the sails are up, the whole world is blotted out and I'm alone with the stars.