Everything You Ever Wanted to Know About Light Pollution 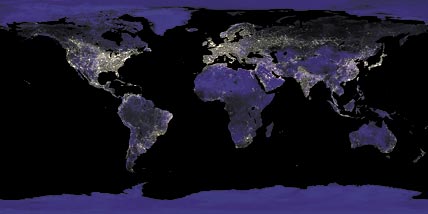 Light pollution plagues astronomers worldwide as revealed in this nighttime image of Earth from space.

Every astronomer knows the artificial skyglow that hangs over populated areas, washing out almost everyone's view of the universe to a greater or lesser degree. In the last two generations, light pollution has spread from a problem in cities to a major astronomical disruption almost everywhere.

But some aspects of light pollution are not widely appreciated by amateur astronomers. Knowledge is power; here are facts that may help you avoid some of the problem and combat the rest more effectively.

Glare versus skyglow. The most annoying and destructive problem is light that beams directly into your eye from a bright bulb. This is called glare; it comes from fixtures that are poorly designed or improperly aimed, in other words most of those currently in use. When glare crosses property lines and creates a nuisance, it's called "light trespass." Glare is often the easiest problem to avoid — by setting up your telescope in a shadowy corner, erecting a tarpaulin to shade the telescope, or negotiating with your neighbors or local government to have the offending light turned off or replaced with a modern one of better design.

Skyglow is what the term "light pollution" properly denotes. One way to measure it is to compare it to the night sky's natural background light. The sky does have a certain minimum surface brightness even in the most pristine, unspoiled environment. This natural skyglow has four sources: faint airglow in the upper atmosphere (a permanent, low-grade aurora), sunlight reflected off interplanetary dust (zodiacal light), starlight scattered in the atmosphere, and background light from faint, unresolved stars and galaxies. Airglow peaks around the maximum of the 11-year sunspot cycle; the other sources vary with the hour of night and the seasons. But their combined average is well known.

Full-cutoff shielding in light fixtures is the essential remedy for both glare and skyglow. A lamp should send all its light more or less down where the light is intended to be used, not upward or sideways. "Full cutoff" is usually taken to mean that no light rays from the fixture go above the horizon, and that at least 90 percent of the light is blocked in the near-sideways range from 0° to 20° below the horizontal plane.

Light that shines in this near-sideways range contributes nothing to most lighting needs. It is merely a dazzling annoyance in the eyes of people nearby and dissipates uselessly into the distance. Light spilling upward, of course, is wasted totally. Tremendous above-the-horizon waste is tolerated because it goes unseen; people who install lights don't normally check them at night from high in the air! The electricity cost of this wasted light has been put at $1 billion to $2 billion annually in the United States.

Near-horizontal light is especially destructive. A light ray aimed straight up is usually not the worst kind. It escapes into space quickly, passing through what astronomers call one "air mass." A ray aimed 10° above the horizon, on the other hand, passes through 5.6 times as much atmosphere — 5.6 air masses — polluting all the way. A ray that skims the horizon pollutes up to 10 air masses, though not much of the light is left by the time it goes through the last few of them.

The situation is comparable to atmospheric extinction of starlight arriving in the opposite direction. When a light ray travels straight up through clear air from sea level, only 20 to 30 percent of it is absorbed or scattered by the atmosphere. The rest escapes harmlessly into space. When the same ray is aimed 5° above the horizon, about 90 percent of it is absorbed or scattered. Thus it causes three or four times as much pollution, when all the damage is summed up over an area many miles across. (That, anyway, is the situation in clear air. Aerosols can complicate the picture.)

Add the fact that most lights provide some blockage at high angles, and it becomes clear that most of the light-pollution war will be won or lost in the narrow battleground just a little way above the horizon. At least this is true at sites fairly far from the offending lights — the semirural areas that seem to have suffered the worst degradation in the last 20 years. Right inside a city, rays at higher angles (and reflected from the ground) are the primary problem. 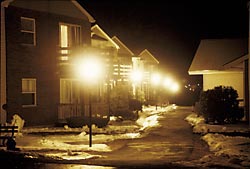 Strong local sources of light pollution can degrade your night sky even more than more distant urban areas can.

Some skyglow is surprisingly local. You can often see more stars 15 miles from a big city than a quarter mile from even one bad rural shopping center.

I've made extensive sky-brightness measurements of the zenith at two sites in Middletown, Connecticut: at the Van Vleck Observatory on the Wesleyan University campus, and at my home two miles away in wooded, semirural suburbia. The campus had, until recently, a night sky more than 20 times brighter than the natural sky background. The sky over my house is only four to five times brighter than the natural level. The change in two miles was remarkable — from a nearly invisible Milky Way to views of the Sagittarius and Scutum starclouds on good nights.

In 1994 the university agreed to replace most of its walkway lights within a block of the observatory with properly shielded fixtures. The sky brightness at the zenith dropped by almost half — a dramatic improvement of 0.6 or 0.7 magnitude.

Such observations point up the importance of dealing with local lights. You don't have to convert an entire city to see results. Hartford, Connecticut, a metropolitan area of a million people, is only 15 miles north of the Wesleyan campus. Its lights obtrude only marginally. Those of New York City about 90 miles southwest interfere not at all.

Another example appears on the light-pollution map of the Washington, D.C., region made by the Northern Virginia Astronomy Club and published in the June 1996 Sky & Telescope, page 82. The club members found surprising holes of relatively dark sky in a region around Washington that looks solid white in nighttime spacecraft photographs.

Watch the color of the daytime sky, especially near the horizon. The bluer the sky, the darker the night will probably be. Whiteness in a daytime sky is due to sunlight scattered by tiny particles. They do just as good a job of scattering artificial light at night. A deep blue sky in the afternoon should mean a transparent sky after dark.

Dry air is another good sign. Even if the upper atmosphere is fairly free of haze, high humidity is liable to bring haze (or fog) lower down. Watch for forecasts of low humidity.

Air pollution matters. The white haze in a blue sky consists of microscopic water droplets that have condensed on tiny solid particles, primarily sulfate dust from distant factories and power plants. These particles are the precursors of acid rain. Sulfur emissions in the United States peaked in 1970 and have since been reduced by about 30 percent. Whether these reductions will continue or backslide is an open question. But the Clean Air Act of 1970 has meant darker skies in the 1990s than we otherwise would have had.

A windy cold front sweeping through a city can clear out local pollution, leaving the night marvelously dark. The windiest city and suburban nights are often the darkest. A passing rainstorm or blizzard can also leave an unusually dark night in its wake.

A case based on money, energy, and good-looking surroundings will get you farther than one based only on astronomy when appealing for light-pollution control. Light sent into the sky wastes money. It adds to noxious power-plant emissions, dependence on foreign oil, and all the other problems created by energy profligacy. It creates an annoying, garish nighttime environment. Those are the points that will carry the most influence with the public and elected officials.

Full-cutoff fixtures that illuminate the ground efficiently with a smaller bulb can save electricity so fast that the cost of retrofitting is typically recovered in three years. After that the savings are free and clear. The city of San Diego, for example, is now saving about $3 million a year in this manner.

Full-cutoff lighting looks more pleasant. By reducing glare it improves nighttime visibility, so that motorists, for instance, can see pedestrians and objects more clearly. Many full-cutoff fixtures are becoming available in various styles. The best ones rely entirely on reflection above the bulb rather than refraction by a plastic cover hanging below it. They provide not only less waste and glare but smoother, more uniform illumination. When people see what well-designed lighting looks like at night, they want it for their own area.

When light pollution is reduced, everybody wins. This conceptual breakthrough was what led David Crawford of Kitt Peak National Observatory and his amateur colleague Tim Hunter to found the International Dark Sky Association (IDA) in 1988. Kitt Peak's successful efforts against light pollution from neighboring Tucson, Arizona, convinced Crawford and Hunter that astronomers have common cause with everyone else. Before then, most astronomers had assumed that "good lighting" was exactly what they didn't want, and that they faced a hopeless battle against the rest of the world.

Join the IDA. The IDA produces useful fact sheets and educational materials (including sources for good lighting fixtures), lobbies the lighting industry, and has worked for state, local, and international light-pollution control initiatives. As of 2006 it boasts more than 11,000 members. Dues from members are essential to pay for staff to handle this work and carry out the IDA's numerous programs.

Supporting the IDA financially is the most effective thing you can do to turn the light-pollution tide. Basic membership is$30 per year ($15 for students, seniors, and those on limited incomes); the address is 3225 N. First Ave., Tucson, AZ 85719, U.S.A. The IDA maintains a Web site, which includes its fact sheets and newsletters, at www.darksky.org. Every amateur astronomer should be eager to help.