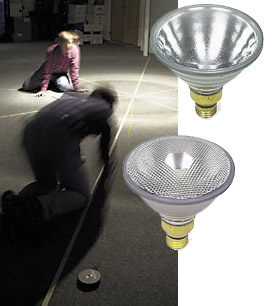 Today’s homeowners have many options for outdoor light fixtures. In our search for ones that are friendly to backyard observers we found that, when it comes to those fitted with floodlights similiar to the two shown here, there is little difference apart from the greater light output of higher-wattage lights.

The late Speaker of the United States House of Representatives Thomas P. “Tip” O’Neill provided a memorable entry for the lexicon of modern phrases when he opined, “All politics is local.” The legendary Massachusetts politician was reflecting on the tendency of lawmakers to be most influenced by their local constituency even when voting on matters of national or global importance.

With a bit of paraphrasing, his statement applies equally well to light pollution. As amateur astronomers we are concerned with the “big picture” issues of light pollution and how they affect the public’s awareness and appreciation of the night sky. But when it comes to backyard observing, our concerns lie much closer to home. All annoying light pollution is local.

Here’s a case in point. We both live on the outskirts of metropolitan Boston. While the city’s rampant light pollution affects our entire sky, for me [di Cicco] it is worse toward the east in the direction of the city. But my sky is almost as bright to the south because of a cluster of back-to-back shopping centers straddling a mile or so of roadway only a fifth as far away as downtown Boston. When I’m at the eyepiece of a telescope, however, the lights that really annoy me are those illuminating porches and yards of nearby houses. Indeed, I occasionally suspend my observing when any of these with a direct line of sight are turned on as neighborhood dogs go out to answer nature’s final call of the night.

As explained in "Your Home Lighting Guide", there are many approaches that today’s homeowners can take to providing safe and effective residential lighting. We tested some of the most commonly chosen options as well as a few that seem particularly “astronomy friendly.” Some of the things we discovered surprised us.

All Lights Are Not Created Equal 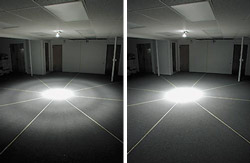 While the illumination pattern falling on the ground appears different (floodlight on the left, spotlight on the right), the 90-watt flood- and spotlights manufactured by Philips have a similar brightness level at the outer edge of their respective light cones. Neither one offers a significant advantage over the other for controlling light spill away from the beam’s centerline.

When it comes to lighting yards and driveways, it's probably a safe bet that the outdoor floodlight fixture is king. These typically hold one or two unshielded bulbs in sockets that can be swiveled to adjust the aim of the lights. Considering their popularity, it's not surprising that store shelves are stocked with bulbs for these fixtures from a variety of manufacturers.

Apart from the obvious differences in wattage and brightness output, some of these bulbs are called floodlights, while others are listed as spotlights. Any thoughts we had that the two terms were simply used interchangeably were dismissed when we found a pair of 90-watt halogen bulbs manufactured by Philips, one labeled "spot," the other "flood." Outwardly the only difference between them is the textured surface on the inside of the bulb's face. We assumed that the spotlight would have a tighter beam and thus be of interest to people trying to control the outward spill from these lights.

While our tests did reveal that the spotlight has a slightly more concentrated overall illumination pattern, the cone of light emerging from the bulb, measured at diameters of equal brightness, is only 12 percent smaller than that of the floodlight. More surprising is that at the center of the beam, the spotlight is actually 40 percent dimmer. Unless these bulbs are mounted side by side, however, it's unlikely that a homeowner will visually note much difference between them, especially when it comes to preventing light spill at large radii from the center of the beam.

Although some of the bulbs we tested projected interesting rings and spikes of light on the ground, the most noteworthy trend involved the level of illumination at increasing distances from the center of the beam. As common sense suggests, the greater an incandescent bulb's wattage, the greater its light output, and the broader its cone of illumination at a given level of brightness. In our test setup we measured the diameter of each bulb's cone of light at a fixed progression of intensities out to a minimum of 0.5 foot-candle. At this level of brightness, which is sufficient to illuminate a yard area adequately in most situations, a 50-watt Sylvania halogen floodlight 7 feet (2.1 meters) above the ground produced a cone of light subtending a 104° angle; a 100-watt General Electric floodlight, 116° and a 150-watt Westinghouse floodlight, 126°. 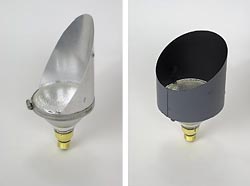 The best way we found to control light spill from floodlights is with a shield such as the ones seen here by Cliff Haas (left) and Susan Harder (right).

As mentioned, while the illumination coming from a nearby light fixture is of concern to backyard observers, a direct line of sight to the face of an offending bulb can be far more annoying. In such cases a simple shield can dramatically improve the situation for the observer without significantly affecting the performance of a floodlight for the homeowner. We tried the two shields shown at right.

When correctly oriented, both are very effective at restricting a direct line of sight to a floodlight's front surface, especially when the observer is at a large angle to the beam's centerline. This is often the case for lights in neighboring yards. Cliff Haas's simple sheet-metal shield provided a substantial reduction in the light spreading outward from one side of a floodlight, and this asymmetric pattern gives some control to the homeowner illuminating an area close to the fixture. The clip-on shield created by Susan Harder offered a more uniform reduction of the floodlight's angular coverage. At the 0.5-foot-candle level, it reduced the light cone from the General Electric 100-watt halogen floodlight from 116° to roughly 70°.

It's not unusual to find porches, especially on older homes, illuminated by conventional incandescent bulbs fitted to simple, nonrecessed ceiling sockets. Unlike floodlights, the illumination from these bulbs is not aimed in a particular direction, and as such, any direct line of sight to these bulbs is vexing to observers. In such cases a do-it-yourselfer can often fabricate an effective shield — but important safety issues involving heat must be considered.

For example, we made a seemingly simple shield by removing the top and bottom from a 1-pound coffee can and fitting it around a standard 100-watt incandescent bulb mounted in the temporary ceiling fixture used for our tests. Within minutes there was enough heat buildup to melt a plastic fitting that had remained unscathed during hours of previous tests. Furthermore, insidious heat buildup behind a lighting fixture can be even more dangerous, damaging electrical wiring and creating a potential fire hazard. Any shield near an incandescent bulb needs to have provisions for ventilation and heat dissipation.

Of the many outdoor lighting fixtures that we encountered while working on this review, several seemed worthy of a closer look. Topping the list is the GlareBuster, since it alone is touted as an astronomy-friendly lighting fixture. Inside the box we found an instruction sheet that offers a mini-lesson on light pollution as well as information promoting the International Dark-Sky Association. The GlareBuster is an extremely effective full-cutoff fixture that accepts a variety of bulbs, from standard incandescents to energy-efficient compact fluorescents.

The only light fixture marketed as friendly to astronomy is the full-cutoff GlareBuster sold by Lighting by Branford which accepts a variety of light sources.

Another fixture that provides full-cutoff lighting is the Regent RSM100 (mercury-vapor) fixture. This unit can put a lot of light on the ground while suppressing direct lighting at all angles above the fixture. The one we tested is a dusk-to-dawn model controlled by an “electric eye.” Be alert: ours came with a 175-watt mercury-vapor bulb by mistake, a lamp that will prove too strong for virtually any homeowner application. We found that it still offered substantial illumination when fitted with its proper 100-watt lamp. One disadvantage of any fixtures using mercury- or sodium-vapor lamps is that they require several minutes after being turned on before providing usable levels of illumination — they are not suited to applications where light is needed “instantly” or for short intervals.

When you need a lot of light on the ground, the Regent RSM100 mercury-vapor light does the job with a full-cutoff fixture.

Heath Zenith makes a large assortment of outdoor lighting fixtures. Two that caught our eye feature halogen bulbs and dual-brightness levels controlled by a motion sensor. The Heath Zenith SL-5630 is a wall-mounted unit with a single bulb recessed under a shield that offers a decent amount of vertical cutoff. We removed a small angled reflector from inside the housing (see the accompanying photograph for details). Removing this reflector is easy, since you have to temporarily remove it in the process of installing the light. This reduced much of the stray light emitted to the fixture’s sides. In fact, were it not for ribbing molded into the transparent plastic cover, this unit would keep almost all of its light directed toward levels at or below that of the fixture.

The unit is equipped with an electric eye for dusk-to-dawn operation. A few minutes after being turned on, this unit automatically dims but will instantly return to full brightness when the motion detector is triggered. Unlike motion-sensor lights that are either on or off, this one provides accent illumination in the “quiet” mode, which is desirable in many applications such as around doorways and walkways.

This wall-mount fixture by Heath Zenith, model SL-5630, provides low-level “accent” illumination for doorways and walkways but automatically switches to full brightness when its motion detector is triggered. An electric eye provides dusk-to-dawn operation. We found that removing the unit’s small pyramid-shaped reflector (see right side of left panel) greatly improved the effectiveness of the fixture’s vertical cutoff.

Heath Zenith's SL-5597 looks more like a conventional twin-bulb floodlight. It too offers the motion-activated Dual Brite feature. Furthermore, the light will automatically turn on at dusk and off after either preset intervals of three or six hours or when dawn arrives. There is manual override of the automatic features, controlled by toggling the light switch (usually inside a house) that powers the unit. Both lamp heads on this fixture have adjustable shields that are effective at reducing the angle with a direct line of sight to the bulb.

While few of today’s lighting fixtures have been designed with astronomy in mind, the conscientious homeowner can find lighting solutions that are more than adequate and, at the same time, friendly to any neighborhood skywatchers.

In addition to the motion-activated dual-brightness features in other Heath Zenith lights we tested, the SL-5597 halogen floodlight can be preset to automatically turn off three or six hours after dusk.