How I Beat Light Pollution in My Hometown 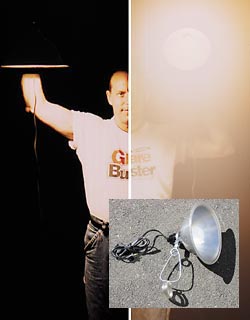 How to convince an audience. The unshielded light (insert) dazzles the eye in the right hand image and hides the author. When the light is pointed downward, you see the lit subject, not the bright bulb, providing better vision and safety — and much less light going into the sky.

Who would have thought that a simple $6 clip-on lamp could change minds forever? Or that a postcard could start a chain of events that has actually darkened my sky overhead at night? It’s true. This is the story of how I, being no better equipped than you, effected change that will protect my hometown’s night sky for generations to come.

It began back in 1994 when I first became active in amateur astronomy. I took my daughter out to our backyard in Branford, Connecticut, to show her the Milky Way, which I remembered arching over the town when I was a child. We couldn’t find it. The Milky Way of my boyhood was gone, hidden behind artificial skyglow stretching from horizon to horizon.

I saw no justification for all that light being cast into the sky and couldn’t accept it as an inevitable side effect of progress. Clearly a hindrance to astronomers, the skyglow was also evidence of poor lighting practices that affect everyone else. I soon learned that most light pollution is unnecessary and preventable, much of it merely careless waste from outdoor lighting that’s poorly designed, overly bright, or improperly aimed.

We were quickly losing Branford’s night world to intrusive lighting from commercial properties and housing developments. I felt compelled to tap people’s common sense and help them recognize the poor-quality lighting around them. I set out to enlighten everyone, from the citizens coming to my club’s stargazing sessions to Branford’s highest officials. 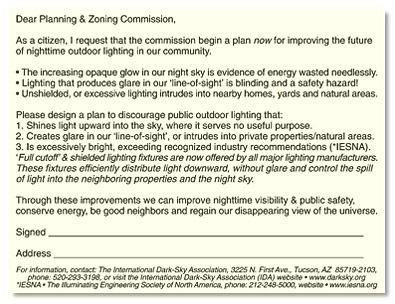 Text from author’s postcard that started it all, designed for anyone to sign and mail.

Other cities and towns around the country were beginning to adopt outdoor-lighting laws, and this seemed like the perfect solution for our growing community. I devised an easy way for people to send the message to town lawmakers: a preaddressed, preprinted postcard. Even people who hadn’t a clue how their town government worked could just sign it and drop it in the mail. It expressed concern about light pollution and requested action from the Branford Planning and Zoning Commission. I handed out these cards at stargazing sessions and other local public events.

The postcards drew the attention of Branford’s town planner, Shirley Rasmussen, and helped open the door for a meeting with her. To prepare, I did some homework using the resources of the International Dark-Sky Association. My enthusiasm, fortified by the IDA’s information sheets, helped convince her that good-lighting regulations would greatly benefit everyone. 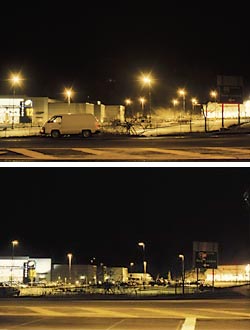 A cinema complex in Branford, Connecticut, before and after its lights were fitted with full-cutoff shields to comply with the town’s new regulations. The change kept the ground well lit while dramatically reducing glare and light trespass onto neighboring property.

That discussion was the first step in creating a zoning regulation for outdoor lighting in Branford. Rasmussen recommended a “regulation” rather than an “ordinance,” as this would get more reliable enforcement through the Planning and Zoning Commission’s own review process. Conversely, she explained, ordinances typically have to rely on the local police to ensure compliance. So began my education in town affairs.

Since this law would be enforced by people with little or no lighting experience, the language needed to be kept simple and direct. I borrowed parts from laws that other cities and towns had passed, which were also available through the IDA. I also spoke to lighting and security professionals, who helped me understand modern lighting applications. Striving to keep the guidelines foolproof, I added illustrations showing examples of acceptable and unacceptable fixtures. After some adjustments, Rasmussen accepted my draft of the regulations. 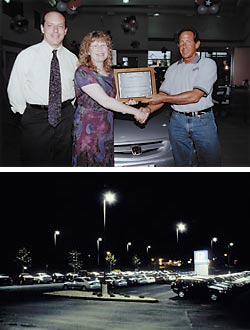 The author (left) and Linda Marks of the Astronomical Society of New Haven present the club’s Good Neighbor Outdoor Lighting Award to a local car dealer. Jeff Brandfon, owner of Brandfon Honda, built his site in careful compliance with Branford’s regulations. “The new lighting accomplished the same thing, and it’s obviously more cost-efficient to run,” he said. His full-cutoff lights use about one sixth the electricity of comparable dealerships &mdash while also helping to preserve the sky.

The Branford Planning and Zoning Commission scheduled a public hearing on the proposed law, and I was invited to give a presentation. I showed slides of poor and good lighting that I had photographed around town. Slides of blinding floodlights (common in Branford) drew audible gasps from the audience. And there were smiles and nods at slides of good, well-shielded lighting.

My message was simply that we need to use outdoor light more responsibly. Responsible lighting means better nighttime visibility, less intrusive light, and less overdone, energy-wasteful installations. Most people really want to do the right thing, and in the case of light pollution, most just don’t realize the negative impacts of their actions.

I concluded with a very convincing clip-on lamp demonstration. This simple hardware-store light illustrated the difference between a shielded and an unshielded fixture and the loss of visibility from glare. When I aimed the unshielded light at the audience in the darkened room, it made people wince and turn away. They couldn’t even see me standing behind it. When I turned the light to its shielded position, the dazzling glare vanished, and there I stood in plain, well-lit view.

The Planning and Zoning Commission approved the regulations without contest, and they became effective on June 1, 1997. They continue to benefit residents and businesses in town by promoting better nighttime visibility, energy efficiency, and preservation of the natural night.

Branford has continued to grow rapidly. A steady stream of applications for new developments and site improvements has been flowing into the Planning and Zoning Commission. All have been required to comply with the lighting law, and Branford has ever more regulation-compliant sites. Many of these serve as models of energy-efficient, noninvasive commercial lighting. Even originally skeptical business owners are coming to appreciate the energy cost savings. 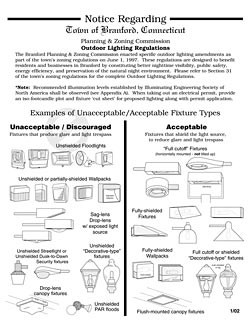 And the night sky? It has actually improved since 1997 despite the town’s growth. The change is especially dramatic compared to what would have happened if the regulations had not been in place.

By continuing to give a little support to the Planning and Zoning folks, I have helped enormously to keep their enthusiasm alive and things running smoothly. Of course, without a hometown watchdog, there would be no one spotting those occasional illegal lights. This ongoing involvement has taken little of my time yet has been educational and truly rewarding.

To get the message out, I have gone on to speak and promote light-pollution awareness far beyond my local community. Since the Branford law passed, I have been asked to make similar presentations to other communities, planning and zoning associations, envi-ronmental organizations, and even the Connecticut state legislature. As other communities adopt laws, I stay in touch for any assistance they may later need.

If I could do it, so can you. Compared to other community issues, light pollution is easy, because everybody wins. The public gets better-looking surroundings, lighting owners save energy, and we stargazers get a better sky. The biggest thing standing in the way of change is simply a lack of awareness. So one person can make real change happen — armed with some IDA information, an awareness-raising presentation, and a little persistence.

Bob Crelin is the author of There Once Was a Sky Full of Stars, designed to introduce children (and adults) to the effects of light pollution. It's available for $17.95 from Sky Publishing.

Includes illustrations of acceptable and unacceptable fixtures to help clarify what types are allowed. The handout is shown above; you can get a full-size copy from our website. You can also see Branford's complete regulations on the town's website (scroll to section 31.5.5). 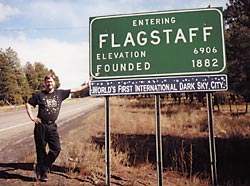 John Grahame of the Flagstaff Dark Skies Coalition shows off one result of his work.

Flagstaff, Arizona, is a small mountain city with a century-old astronomical legacy; it’s home to Lowell Observatory and the U.S. Naval Observatory’s Flagstaff Station. A comprehensive lighting ordinance passed in 1973, but then came the lighting explosion of the late 20th century.

In response, Lance Diskan, John Grahame, and others founded the citizen-based Flagstaff Dark Skies Coalition. Building on the positive relationships cultivated by local astronomers, the coalition broadened awareness of the benefits that dark skies bring to the community through many successful programs, including “Celebration of the Night” events, brochures, and good-lighting awards. They hang tags identifying quality light fixtures in retail stores. They met with community members and police to discuss security lighting issues and to allay concerns about compromising safety. Public education has been the most vital part of the coalition’s success, with a focus both on the stars and on good lighting’s benefits to all. 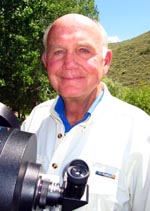 The lighting in and around Ketchum, Idaho has improved thanks to the work of Steve Pauley.

Ketchum, Idaho, was a growing ski-resort town with worsening light pollution when Steve Pauley decided to act. He educated himself by reading IDA information sheets and speaking with activists elsewhere. After writing an article for the local newspaper, he began working closely with local officials to draft an ordinance that passed in 1999.

Now known by many locals as Dr. Dark or Captain Kilowatt, Pauley credits his success to his direct involvement with town lawmakers — presenting slide shows, organizing field trips to point out good and bad lighting — and also keeping the ordinance easy to understand. To address any opposition, Pauley discussed issues of visibility and safety, health effects, and crime studies. And he pointed out how quickly the town was losing its starry skies.

Since then the larger city of Hailey nearby has followed suit with similar lighting laws — also with Pauley’s help. Ultimately, Pauley would like to see statewide regulations formed. 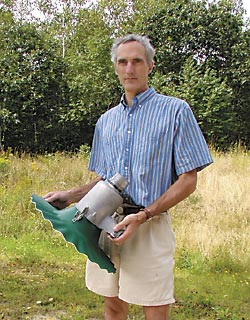 Kennebunkport, Maine: For several years Peter Talmage has been following the results of the lighting law he instigated in Kennebunkport, Maine, a seaside resort town. Talmage was originally roused to action by a utility-company proposal that would have drastically changed the town’s generally low-level, modest lighting. He worked with town selectmen to form a lighting committee, whose proposed ordinance drew wide support from townspeople hoping to maintain Kennebunkport’s nighttime character.

To make the code-enforcement officer’s job easier, the ordinance’s standards are more hardware-based than performance-based. This way fixtures can be judged without having to measure light levels on site at night. Also key has been Talmage’s continuing involvement.