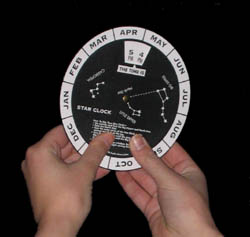 The Star Clock is a simple, easy-to-make aid that lets you tell time using the stars.

Our daytime concept of time is based on the motion and position of the Sun. But did you realize that you can use can use the stars to tell time at night? It's easy using the Star Clock described here.

Long before the invention of clocks and watches, skywatchers knew that the motion of the stars marked the passage of time during the night. As Earth turns on its axis, the stars appear to rise in the east and set in the west, just as the Sun and Moon do. Looking up in the northern sky, however, the stars do not rise or set — instead, they seem to slowly turn counterclockwise around Polaris, the North Star.

Our Star Clock combines this nightly pinwheel motion around Polaris with the seasonal position of the two familiar star patterns — the Big Dipper and the "W" of the constellation Cassiopeia — to find the time in a simple and fun way.

Making and Using the Star Clock

First, download the two parts for your Star Clock (PDF). (Make sure your computer can display PDF files; if it can't, download and install the free Adobe Reader.)

This Star Clock shows how the Big Dipper, Little Dipper, and Cassiopeia appear in the northern sky just before 9 p.m. (standard time) in early May.

The two parts for the Star Clock are sized to fit on a single letter-size sheet of paper. Print out the sheet, cut out the parts, and then join them as shown at left using a paper fastener. If desired, you can glue each circle to construction paper or thin cardboard to add stiffness. That's it!

Once it's dark, go outside and face north, holding the Star Clock so the current month is at the top of the outer circle. Now turn the black disk until the small picture of the Big Dipper matches the real Big Dipper's position in the sky. The current time will appear in the cutout. Note: If daylight-saving (summer) time is in effect, you'll need to add one hour to the indicated time. 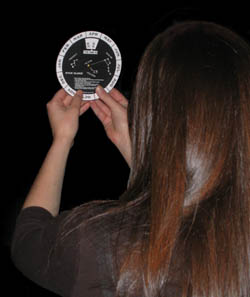 To use the Star Clock, place the current month at top, then spin the black disk until the star patterns match your view of the northern sky.

You can also use your Star Clock to determine where the Dippers and Cassiopeia will be in the sky at a specific time, say, 9 p.m. Make sure the current month is at the top, and then turn the black disk so that the indicated time is 9 p.m.

Also, by turning both disks together (so that the time you've picked stays the same), you'll be able to see how the Big Dipper appears in the sky at that time throughout the year. It's highest in the sky, perched directly above Polaris, in early evening during May and June. But during November and December, the Dipper is down low and may be too near the horizon (or below it) to be seen. So, instead, look for Cassiopeia's W high up.

Be sure that you're facing north when using the Star Clock. If you're unsure where north is, simply note where the Sun sets and then turn to your right — now you're looking north, more or less.

Developed by the Pacific Science Center, the Star Clock is one of many excellent activities for the whole family found in Astro Adventures, a space-science curriculum for grade-school students.

Dennis Schatz is Vice President for Education at the Pacific Science Center in Seattle, Washington. Paul Allan is the coauthor, with Schatz, of Astro Adventures.

Do they have other stars instead of Big Dipper , Little Dipper and the "W" of the constellation Cassiopeia to tell time.

I suppose you could use other stars but it can be a bit more complicated. Using the Little Dipper, the Big Dipper and the constellation Cassiopeia to tell time is much easier because these constellations are circumpolar. Circumpolar means they revolve around the NCP (North Celestial Pole) which is right next to the star Polaris. Polaris is the end star of the little dipper handle and only 3° from the NCP. If you notice using this Star Clock the Little Dipper swings around in a counter-clockwise (CCW) direction like the hour hand of an analog clock. When the Little Dipper has moved 90° CCW then 6 hours has passed. This is why the pivot point of this clock is on the star Polaris. The Big Dipper and Cassiopeia are signpost stars and help the observer locate the North Star which is duly named Polaris.