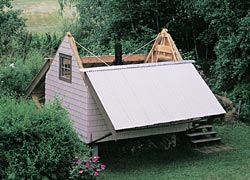 By day my observatory looks like an ordinary (if rather grandiose) garden shed. Visitors hardly notice the lag bolts in the vertical corner boards or the beefy gate hinges mostly hidden behind them. In fact, that's the whole idea. From the start I wanted a structure that would blend well with other backyard structures in my neighborhood. This argued against a dome, turret, tower, or even a roof that rolled off to the side on a gantry of rails and posts. Instead, what caught my eye was the roll-down-roof observatory described by astronomer David Oesper and carpenter Andy Orngard of Ames, Iowa, in the May 1993 issue of Sky & Telescope (pages 90–93). While editing their article for publication, I was making mental notes.

In the roll-down-roof approach, the gabled roof is split along the central ridge. Each half can be lowered separately to expose the sky. The sections don't slide straight down or swing apart — actually, they do both! The top edge of each section has wheels that roll down the gable slopes, but the bottom edge swings outward on the hinged corner boards. There's only one way to describe this odd motion: as the roof sections go down and back up, they "flap" like a bird's wings. 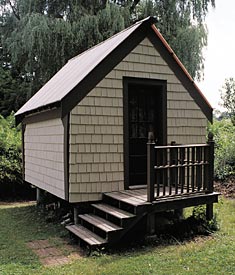 Sinnott's elegant observatory blends in with his New England neighborhood.

Others were intrigued by this approach. Almost immediately after the May 1993 S&T hit the streets, Ronald Rosenwald sent a picture of his version in Huntsville, Texas (S&T: December 1993, page 95). But I was planning a much bigger structure, one with a 10-by-13-foot floor compared to Oesper and Rosenwald's 8-by-8-foot foundation. In this sense, I felt I was entering uncharted waters.

In the smaller observatories, the roof halves hang on cables that are looped over pulleys at the gable peaks and attached to hanging counterweights. These weights nearly balance the roof sections at all positions; a push sends a section up or down. Without them, of course, the roof halves would crash to the ground. 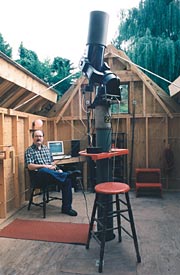 The 7-foot-tall pier in Roger Sinnott's observatory is the steel base of a streetlight declared surplus by the City of Cambridge, Massachusetts. It rises through a hole in the floor so vibrations are not transmitted from anyone walking around the observatory.

I, too, tried counterweights, even though my roof sections weigh 225 pounds each. A portion of this weight is carried at all times by the gables and corner-board supports. Through experimentation I found that an 80-pound weight pulling up at either end was enough to make a roof section "stay put" at the middle of its travel range, but that when a section was almost fully raised or lowered it would move on its own. Moreover, those cast-concrete weights were large and unsightly. Worst of all, as they rose and fell in step with roof movements they would sometimes bang against the wall. There had to be a better way!

At this point I sought help from my brother, Warren, a mathematician at Ohio State University. His analysis of the roof sections' complex motions led to a number of interesting suggestions, including extra weights that would "kick in" as a section reached different points in its travel. In the end he concluded that a force increasing linearly as the roof went down would give much better compensation overall than the constant force provided by hanging weights.

Based on Warren's analysis, I did away with the weights and now control the roof with heavy-duty garage-door springs. There are eight such springs — four for each roof half — tucked neatly against the observatory walls and in the underside of each roof section. The roof wings now stay in whatever position they are left, and it is easy to push them up or down. One essential warning: such springs can be very dangerous if not properly installed. 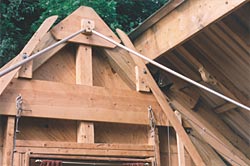 This close-up of a gable peak in Sinnott's observatory shows the two levers (protruding near the top) used to raise the roof casters out of their notches (which are concealed behind the wood triangle at top). Attached to this triangle are two long aluminum struts that keep the gable rigidly positioned even when the roof sections are fully lowered. Without these struts the gable could conceivably flex enough to derail the casters.

As in Oesper's design, I cut notches near the gable peaks to catch the pair of 4-inch rubber-wheeled casters at the top of each roof section. Before a section is opened, this upper end must be lifted 4 inches so the casters can begin rolling down their tracks. Long wooden levers mounted on the end walls serve this purpose. Since my arms aren't long enough to reach these levers simultaneously, they are joined with clothesline and pulleys to a pair of hand-operated winches at the middle of the building. One crank lifts one roof section, another crank the other. When closing up for the night, I raise each section nearly all the way and then use the levers to ease the casters back into their notches. (Otherwise, as I learned early on, the roof section would fall into place with a terrific thud.) The one procedure I have yet to automate is securing the roof halves in place against lifting in high winds. Currently, at the end of each night I climb a stepladder and lock the 2-by-12s at the ridge together with two big bolts and wing nuts.

While it may not suit everyone, this unusual observatory functions remarkably well. Among its appealing features, the tall gables offer plenty of room for a full-height door at one end and a window at the other. The building is oriented so the gables don’t obstruct any part of the sky that isn’t already blocked by neighbors’ trees. The top plates along the connecting walls stand just 5 feet above the floor, so a telescope on the central pier can swing down all the way to the horizon.

Thanks to the 45° slope of the corrugated-plastic roofing material, snow slides right off before even 2 inches accumulate. A 14-foot strip of bent aluminum flashing, nailed along the ridge of one roof section, overlaps the other to keep rain from entering at the top. I just have to remember to open that section first, and close it second, to avoid damaging the flashing itself. So far, I have always remembered.

A large plate welded to the top of the central pier makes it easy for me to install the "télescope du jour." In 1995–96 I was using a 6-inch refractor to follow Saturn’s rings though their edgewise presentation. At times I have studied Mars and photographed the Moon with my 6-inch f/19 Buchroeder schiefspiegler. Lately, I've been making astrometric measurements of asteroids and comets. My next home-brew project will be an 8-inch f/3 flat-field reflector of the type pioneered by Karl Schwarzschild in 1905.