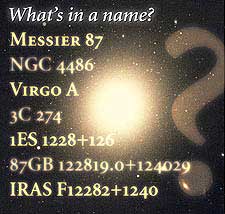 Look through any issue of Sky & Telescope magazine and you'll find a wide variety of seemingly incomprehensible names for celestial objects: Arp 220, MWC 560, QSO 0957+561, 1E 1740.7–2942, 3C 273, PSR 1257+12. Some apply only to galaxies, others to nebulae and star clusters, and still others to pulsars, quasars, radio-wave emitters, X-ray sources — everything in the astrophysical zoo. Luckily, though, backyard astronomers with ordinary telescopes needn't memorize the names of hundreds of authors, acronyms for space-borne experiments, or codes for sources at invisible wavelengths.

M is for Messier

Deep-sky objects such as star clusters and nebulae began to draw attention as soon as telescopes were pointed to the night sky. But it wasn't until the late 18th century that the French astronomer Charles Messier began tallying them in substantial numbers, publishing several lists that were to become the now-familiar catalog bearing his name.

Messier (pronounced mess-YAY") was a comet hunter, and the main purpose of his list was to provide himself and others with a roster of diffuse cometlike objects to ignore. Although Messier discovered a large portion of those in his list, many had already been found by others (sometimes unbeknown to him), especially by his colleague Pierre Méchain.

Although the Messier catalog is 200 years old it is still the most commonly used list, simply because it contains most of the bright diffuse objects in the northern two-thirds of the sky. Practically every amateur who becomes interested in viewing clusters and galaxies gets started by working from the Messier list. All 103 of the M objects (or 107, 109, or 110, depending on which later additions you accept) can be seen in a 6-inch telescope even under suburban skies. Some observers have bagged all the Messier objects with a 2.4-inch refractor, and from a very dark site they're all visible in 8 x 50 binoculars.

The NGC and Beyond

The next big catalog to appear that remains in wide use today was the NGC . The New General Catalogue of Nebulae and Clusters of Stars by John L. E. Dreyer (pronounced "dryer") appeared in 1888. It is a compendium of all the lists of nonstellar objects compiled by the many 19th-century observers who had been ransacking the sky. Chief among these lists was John Herschel's monumental General Catalogue of Nebulae, published in 1864. The NGC contains 7,840 objects of many types, numbered in order of equinox-1860 right ascension.

As discoveries kept pouring in, Dreyer published two supplements to the NGC in 1895 and 1908 titled the Index Catalogues, abbreviated IC. They brought the total to 13,226. These three lists should really be considered a single work. They include nearly every extended (non-pointlike) telescopic object beyond the solar system that is visible with, say, an 8- to 12-inch telescope from a backyard observing site with slight to moderate light pollution. Almost any NGC object can be detected with a sharp 12-inch telescope working from a first-class observing site. The IC is a different story, however. About half the IC objects were discovered visually, but much of the second IC catalog (objects numbered IC 1530 and up) consists of photographic discoveries. Many of these are difficult or impossible to see visually.

Huge numbers of objects, galaxies in particular, continued to be recorded and cataloged in works such as the southern photographic surveys by Harvard Observatory. For amateurs who push beyond the limits of the NGC and IC, the next designation usually encountered is UGC — for the Uppsala General Catalogue of Galaxies by Peter Nilson (Uppsala Astronomical Observatory, 1973). It includes the 12,940 brightest galaxies north of declination –2½° (1950.0). Delving still deeper, one soon meets the Master List of Nonstellar Optical Astronomical Objects (MOL) by Robert S. Dixon and George Sonneborn (Ohio State University Press, 1980). This huge, diverse compendium packs 185,000 brief listings from 270 catalogs into a single volume.

Everything grows more complex with time. As astronomy has expanded, many objects have acquired an abundance of different names. One way a familiar entity acquires a new name is to be included in a list of special objects. Thus the galaxy Arp 220, mentioned at the start of this article, is IC 4553 and IC 4554. Because of its bizarre shape (it's probably two spirals colliding and merging), Halton Arp included it in his Atlas of Peculiar Galaxies published in 1966.

More designations get added when an object is detected at wavelengths outside the visible portion of the electromagnetic spectrum. One of the brightest galaxies in the Virgo cluster is Messier 87 (NGC 4486), but it is also known as Virgo A, 3C 274, 1ES 1228+126, 87GB 122819.0+124029, and IRAS F12282+1240. These are among the 20 names of this one galaxy listed in the NASA Extragalactic Database (NED), a bibliographic computer catalog maintained by the Jet Propulsion Laboratory. "Virgo A" dates from the early days of radio astronomy when the resolution of radio telescopes was so poor that a source's location couldn't be determined much better than to within a whole constellation. The name 3C 274 comes from the Third Cambridge catalog of radio sources. Like Messier's optical list, these early radio surveys corralled most of the "best" objects. So even though vastly better radio catalogs are now available, the brightest quasar in the sky (optically a 13th-magnitude "star" in Virgo) will forever be known as 3C 273.

The last three names for M87 mentioned above are built from celestial coordinates, in this case equinox-1950 right ascension and declination. Look again at 1ES 1228+126. The two blocks of numbers mean right ascension 12h 28m, declination +12.6°. Positional names of this sort are useful and nearly inexhaustible but quite cumbersome. What do the prefixes mean? "1ES" is the name of a 1992 catalog of sources detected at X-ray wavelengths by the Einstein satellite. The "87GB" catalog resulted from a radio-continuum survey of the northern sky done at Green Bank, the U. S. national radio astronomy facility in West Virginia. Finally, IRAS was the Infrared Astronomical Satellite, launched in 1983, which made the first far-infrared survey of the sky. M87 showed up as a "faint" source in the IRAS data catalog published in 1990, earning it one more designation.

Laying Down the Law

This naming business clearly threatens to get out of hand. But the complication is utterly necessary if really large numbers of objects are to be specified unambiguously. The 87GB and IRAS catalogs have around 55,000 and 350,000 entries, respectively. The USNO CCD Astrograph Catalog contains about 113 million stars, and the Hubble Guide Star Catalog II has 945,592,683 objects. The Sloan Digital Sky Survey now underway has so far gathered measurements on nearly 500 million stars and galaxies, each one demanding its own individual identity.

In an effort to manage the mammoth bookkeeping tasks of the future, the International Astronomical Union has urged astronomers to assign names within a single well-defined but fairly flexible system. New names are supposed to have two elements, an "origin" and a "sequence." Optionally a "specifier" may be added too.

For example, while deep-sky observing a few years ago I came upon what appears to be an unreported open cluster in Auriga near the asterism of the Kids. If I want to name it, I could do so the old-fashioned way: start a list named for myself and call the cluster Skiff 1. This would be appropriate if I were publishing a lengthy table of newly identified clusters. As long as I never publish a different kind of list and nobody else named Skiff does either, there would be no problem calling new clusters Skiff 1, 2, 3, and so on.

A better name for Skiff 1 might be BAS J0458.2+4301. "BAS" is the "origin;" it's my initials. (One or two letters wouldn't be acceptable; S is already commonly assigned to emission nebulae cataloged by Stewart Sharpless in 1959, and BS is widely used for stars in the Yale Bright Star Catalogue. BAS isn't taken, however, so I could claim it.) The "sequence" gives the position instead of just a serial number. The J indicates that the numbers following are right ascension and declination in the J2000 system, the precisely defined coordinate grid for epoch 2000.0. The numbers are given here to a precision of 0.1 minute of right ascension and one arcminute of declination; other degrees of precision are often used. In a similar way I could use B1950 coordinates, or maybe galactic latitude and longitude. (When older designations don't specify a coordinate epoch, it's assumed to be for 1950.0.)

I can add objects to my collection more or less endlessly as long as no more than one falls in the same square-arc-minute "bin" on the sky defined by the coordinates. (There are about 150 million such bins on the celestial sphere.) In a pinch, one could add a "specifier." An interacting pair of galaxies, for instance, might be called BAS J1234.5-3456 (SW) and BAS J1234.5-3456 (NE), indicating the southwestern and northeastern components of this fictitious object.

Although a scheme like this is necessary for the multitude of objects inhabiting the sky, I find it soulless and clinical. At a 1984 meeting of star-cluster specialists, Berkeley astronomer Ivan King reacted to one presentation by mocking the prospect of identifying well-known objects with long strings of digits. At one point he told the speaker, "I'm glad to see that you identified M49 as NGC 4472, because, although you are a man of the 18th century, I live in the 19th century myself and prefer NGC numbers." Out alone on a clear night with a telescope, those simpler names are far more attractive.