The Setting Circles on Your Telescope

Nearly every telescope on an equatorial mount comes with setting circles. In theory, they show the right ascension and declination to which the telescope is pointed, making it simple to aim at any object whose coordinates you look up. In practice, experienced observers generally regard setting circles as decorations to help sell telescopes, as a source of false hope for beginners, and possibly useful as makeshift frisbees.

We're talking here about traditional mechanical setting circles: rings engraved with lines and numbers on the telescope's two axes. More recent "digital setting circles," electronic readouts that tell where a telescope is pointed, can be vastly more accurate and useful; they're described at the end of this article.

Conventional setting circles are no substitute for learning to find your way around the sky by looking with your eyes. But having absorbed this lesson, many observers scorn their setting circles forever after, even in situations when they might be quite helpful.

The problem is that many adjustments and alignments have to be done very precisely before the circles will display right ascension and declination accurately enough to find objects "blind." Rarely are all of these adjustments made.

But if you have some knowledge of the sky, you can use the circles for less demanding tasks that have looser accuracy requirements. We will discuss this simpler type of use first, then go on to the more exacting applications.

Their inherent inaccuracies give less trouble if you use setting circles only to measure your way a few degrees across the sky rather than all around the celestial sphere. This is the offsetting method of finding objects from a known star.

This method works even with the oldest-style setting circles that only read hour angle from the celestial meridian instead of right ascension. (These are identified by their 0 to ±12 hour markings that can't be set to anything but 0 when the scope is pointed at the meridian.)

First check that the telescope is polar-aligned moderately well. The polar axis of the mounting should be aimed at the celestial pole to within a couple of degrees. (Instructions for polar alignment come with most equatorial scopes.)

Look up the coordinates of your target object and any fairly bright star within 10° or so of it. Subtract the right ascension and declination of the star from those of the object. The result tells you how far from the star to swing in declination going north (or south if the value is negative), and how far in right ascension going east (or west if negative).

Offsetting can be very useful if the normal method of finding objects — star-hopping with the aid of a good map — isn't working. Perhaps you don't have a map that shows enough stars for you to home in on the exact point. Perhaps your finderscope is too small or the light pollution too bad, or you've repeatedly gotten lost in a difficult field and want to try a new tack.

Offsetting is especially efficient when you plan to survey many objects in a small area of sky. Work out your offsets indoors beforehand, and write them in your observing notebook.

If you want to find objects anywhere in the sky by dialing their coordinates, you should understand the many precise adjustments required to your telescope.

Suppose your lowest-power, widest-field eyepiece gives a 1° true field of view, typical of amateur instruments. If the telescope is pointed ½° wrong, your object will be on the edge of the field where it will go unnoticed. Merely to place it closer to the center than to the edge, you have to aim with ¼° accuracy.

What are the adjustments? The axis of the telescope's optical system should be made truly perpendicular to the mount's declination axis. This in turn should be perpendicular to the mount's polar axis. The polar axis must be accurately aligned on the celestial pole. The circles themselves must be positioned just right. Last, you must read the circles accurately — usually to a small fraction of their finest gradation.

Some of these adjustments have two degrees of freedom, such as in altitude and azimuth when aligning on the celestial pole. So all told, there are eight variables where error can creep in.

Based on the way simple random errors add up, each of these eight adjustments must be good to 0°.09 accuracy to achieve an average total error of 0°.25 in where the telescope is pointed. Half the time the errors will add up to be better than this, half the time worse. To make them fall consistently on the better side, you should strive for even finer accuracy — say 0°.05 — in each adjustment.

No wonder setting circles have a reputation for never working.

We'll deal with each adjustment in turn.

First, make sure that the optics of the telescope are collimated (aligned) as best you can. Collimation on a reflector is usually just a matter of turning the adjustment screws behind the primary mirror to make a slightly out-of-focus-star image perfectly round when centered. On a Schmidt-Cassegrain telescope, you make tiny adjustments to the screws on the secondary mirror mount. Refractors rarely need collimation. Instructions for collimating a telescope usually come with it.

The reason for getting collimation all squared away first is that when you collimate a telescope, you change its aim point — that is, the direction of its optical axis with respect to the tube. After you collimate you will have to realign the finderscope to match the main telescope's new aim.

Now swing the tube to about 90° declination. While looking through your lowest power eyepiece, swing the mount back and forth in right ascension by turning the polar axis. You will see the field slowly turning. Make slight adjustments to the declination so the motion of the field is minimized when you turn the scope.

Ideally, you will find a declination position where the stars rotate around the exact center of the field. This happy state of affairs means you have gotten the optical axis truly parallel to the mount's polar axis.

Don't expect it to happen. Instead, you will only be able to find a place where the field motion is minimized, not reduced to zero. The point of sky around which the field appears to rotate will be off to one side, perhaps out of view entirely.

You want to shim the telescope tube in its cradle, or adjust the fork arms if the scope has a fork mount, to bring this point to the center of view. While turning the scope in right ascension, form a mental image of where the field's center of rotation lies. Nudge the scope that way to judge which side of the cradle needs to be shimmed, or which fork arm raised.

You can use strips of brass or plastic or folded-up aluminum foil for shimming. Adjust a fork arm on a Schmidt-Cassegrain scope by loosening the bolts that hold it to the drive base and sliding the arm slightly up or down. (This may be limited by the size of the bolt holes) The adjustment may take quite a bit of trial and error, but it's a job you'll only have to do once.

If your telescope tube can rotate in its cradle (a convenience on many reflectors), you may find you can get closer to the ideal after rotating the tube by some amount. Try this first, then do the shimming. Just remember that in actual use, you may need to rotate the tube back to the position it's in right now before the setting circles will work well. Mark the tube so you can do this if the circles later give problems.

Once you've done the best you can, loosen the declination circle, turn it to read precisely 90°, and retighten it permanently.

Now a confession: we've skipped a step. In the case of a German equatorial mount we haven't checked that the declination axis is perpendicular to the polar axis, and with a fork mount we aren't sure if the optical axis is perpendicular to the declination axis. That's because there is little or nothing you can do about it. Trust the manufacturer and cross your fingers.

The next step is accurate alignment on the celestial pole. Some telescopes come with pole-finding reticles for their finderscopes. Another method that is especially precise is described in the article
"Accurate Polar Alignment."

Now, at last, the setting circles are ready for their intended use!

The declination circle need never be touched again. But the right ascension circle does have to be repositioned at the start of each observing session, because the sky is always moving.

Now you can dial in the right ascension and declination of any object in the sky. Look in your lowest-power eyepiece, and there it should be.

If your right ascension circle is driven by your telescope's clock drive, as is the case with all Schmidt-Cassegrains we know about and many reflectors, you can dial in object after object all night without touching it again. If the circle is not driven, reposition it to the right ascension of the current object just before swinging to the next.

Technology to the Rescue

New ways have recently been invented to circumvent the problems that make setting circles so error-prone. These methods revolve around the "digital setting circle." In its simplest form, this is nothing more than a readout in little red numbers of what an ordinary setting circle tells you with a dial and pointer. But once this data is electronically encoded, a computer chip can begin to work miracles with it.

In some versions you can simply "initialize" the circles by setting on two or three bright stars at the beginning of a session, and the chip corrects for misalignments of many kinds — even failure to polar-align at all.

The next step up in sophistication is automatically correcting for lack of perpendicularity in the mount's axes — compensating for imperfect mechanics by smart electronics.

Team up good digital setting circles with a computerized data base of celestial objects, and you gain the astounding finding capabilities of a "computer assisted" or "robotic" telescope. These are currently working a revolution in high-end amateur astronomy, finally fulfilling the promise of what many people thought setting circles were supposed to do all along. 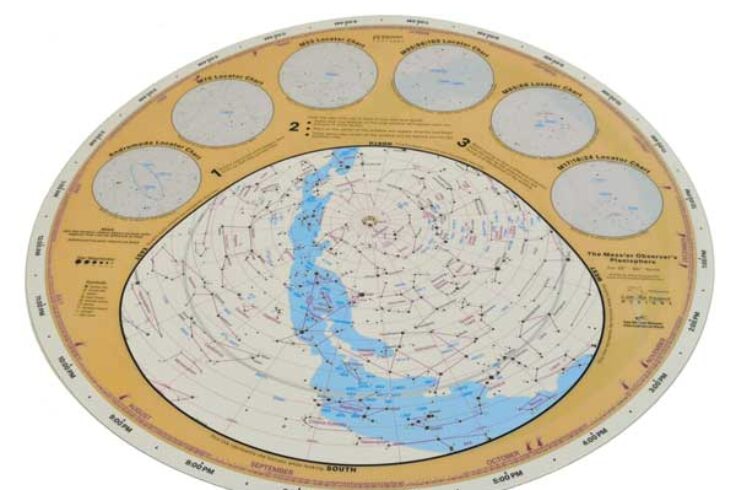 Is it possible to detect Jupiter's satellites with the unaided eye?

What was that flashing light in the sky? 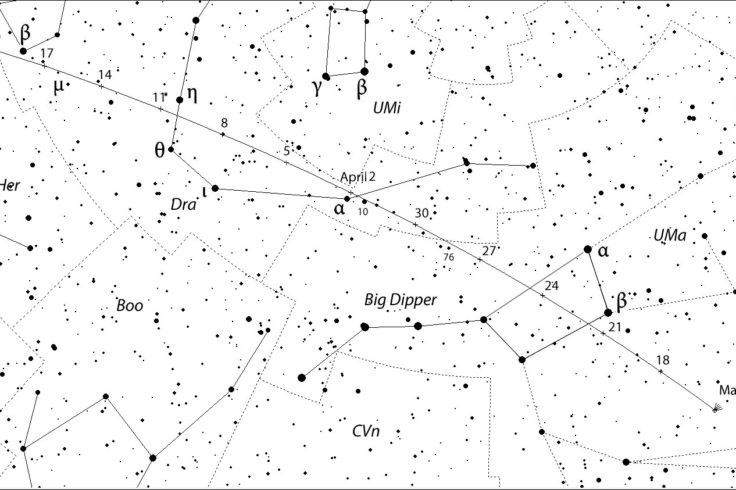 Getting Started in Astronomy 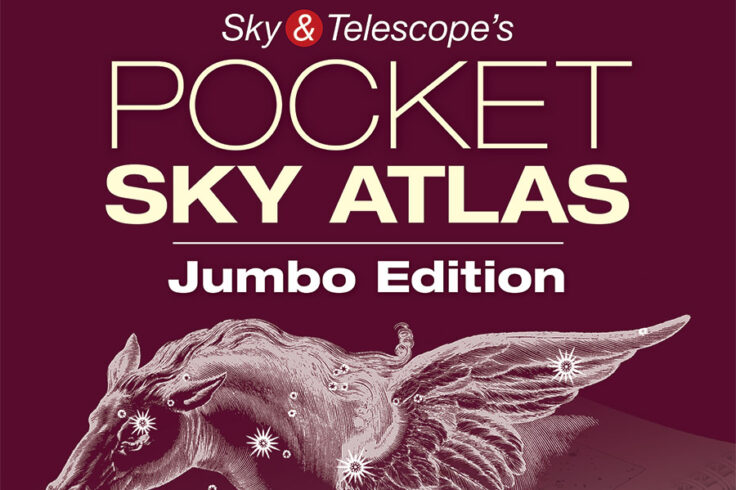