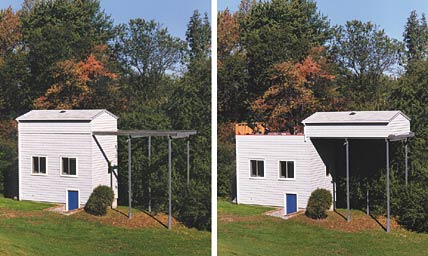 I built my first backyard observatory in the mid-1960s when a homemade 8-inch telescope evolved into a very nonportable 200-pound behemoth decked out for astrophotography. I didn't think much about design. Rather, I loosely copied Henry Paul's roll-off-roof observatory, which appeared on the cover of the December 1964 Review of Popular Astronomy. The fact that it still stands at my boyhood home, albeit as a garden shed, is a tribute to teenage enthusiasm rather than a thorough knowledge of construction techniques.

In the years that followed, I became increasingly convinced that the roll-off roof design was right for me. While a dome affords greater protection from wind, dew, and local lights, it is a chore keeping its slit aligned with the telescope unless is is automated. However, my overriding argument for the roll-off roof is one of aesthetics — I enjoy looking up and seeing the whole sky when I'm observing. The open roof also allows rapid temperature accommodation. Even on the hottest summer days, when the building's interior becomes stifling, opening the roof at sunset allows everything to reach ambient temperature by the time twilight ends — an important consideration for decent astronomical seeing.

Two of my first observatory's features proved their worth for later projects. My moving "roof" included part of the side walls; it looks like a squat covered bridge with one end enclosed. This provided ample standing room and plenty of clearance for tall telescopes, while giving unrestricted access to the horizon when open. A heated room next to the telescope had obvious benefits — and is all the more essential these days, now that delicate computer equipment has become indispensable for most observers. 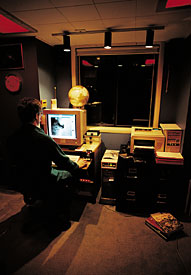 Dennis di Cicco has discovered more than 100 asteroids from the control room of his observatory, where he can operate his telescopes by computer.

When I moved to the western suburbs of Boston in the early 1980s I planned to build another backyard observatory. While the details were being worked out I set up a temporary pier in the backyard and carted my Schmidt-Cassegrain telescope back and forth from the garage in a wheelbarrow. Although the pier eliminated the nightly chore of polar alignment, the hassles of setting up and breaking down the scope became more and more annoying as inevitable delays occurred with the observatory project. That’s when I happened upon the description of a small telescope shelter in a 1921 book, Astronomical Photography for Amateurs, by H. H. Waters. In less than three weeks a "temporary" shelter surrounded my pier. This 8-by-4-foot "doghouse" cost less than $200 to build, and while it certainly was cozy, it wildly exceeded my expectations. Indeed, if there hadn’t been 1,000 cement blocks stacked nearby and destined for my "real" observatory, I might still be using the doghouse!

Beginning With the Barn

My current observatory is a multilevel structure with a convoluted design history. It began as a plan to mount my telescopes on the roof of a small barn on the property. The horse stall below was to be transformed into a darkroom. This idea was scrapped, however, when the barn proved to be too poorly constructed to support the observatory’s weight. Nevertheless, I had become fixated on a tall structure as a way to increase sky visibility and provide a heated office and darkroom.

A search through back issues of Sky & Telescope uncovered very little about multilevel amateur observatories, especially designs involving a roll-off roof. Since I had several instruments, individual piers extending to the ground were not practical. Instead, I designed a 10-by-18-foot cement slab 6 inches thick supported by six 18½-foot-tall columns. The observatory building is constructed around this free-standing slab and is completely isolated from it. To reduce vibration, the columns even have footings separate from the building's foundation, though this may have been unnecessary. The top-story floor is suspended a few inches above the slab; the telescope piers extend through floor openings to the slab beneath. 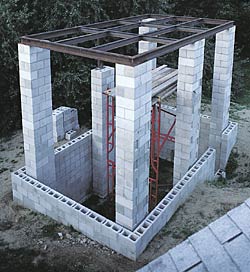 At the heart of di Cicco's observatory is a concrete slab that supports the telescopes while being isolated from the rest of the building. This shows the slab's support columns and steel framework made of railroad tracks.

While unorthodox, this arrangement works very well and gives me the freedom to place instruments anywhere within the observatory. Telescopes temporarily set up on the walking floor are almost impossible to use if anyone is moving in the building, but scopes attached to the slab remain rock steady.

The office is below the slab, and its ceiling and walls are heavily insulated. What little heat escapes does not affect the seeing at the telescopes. Indeed, even at this modest increase in elevation, the seeing appears to be considerably better than I experienced on the ground just a few feet away. A library now resides in the room below the office, which is mostly below ground level. (This is a sign of the changing nature of astroimaging — the library was a darkroom when the observatory was built.)

Although first light didn’t occur until nearly three years after the foundation was begun, a relatively small amount of time was spent working on the observatory during the first two years — I was too busy enjoying the doghouse. The building cost less than $9,000 (mid-1980s), tools rented and purchased for the project included. More than a third of this cost was for finish work in the office and darkroom and for an elaborate electrical system that includes hundreds of feet of wiring for power, telephones, and computers. There are even radio-controlled switches for operating heating and lights from my house.

When Your Turn Comes 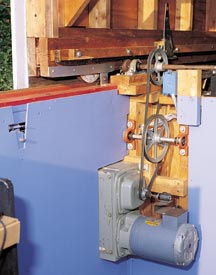 While the two-ton roof atop di Cicco's observatory was originally moved by hand, a variable-speed motor scavenged from a discarded treadmill now does the heavy work.

Here are some general suggestions that may serve you well — even if you aren't planning to build a three-story observatory.

Unless you are aiming for a simple structure like the doghouse, make your observatory bigger than you think it should be — space fills up quickly! In addition to the "mandatory" dim red observing lights, include lots of white lights. You'll appreciate them the first time you drop a tiny screw on the floor at 1 a.m. Avoid fluorescent lighting; even brief exposure to its ultraviolet component is far more damaging to dark adaptation than are incandescent lights. If using conduit for electrical wiring, plan for the future. My current observatory has lots of conduit running between the floors, but the 2-inch tubing that seemed fine for regular wire in the mid-1980s is too small for the plugs on many of today's computer cables.

Last, be prepared to share your observatory with the local wildlife. Mine typically serves as a home for nesting birds, mice, an occasional squirrel, and enough insects and spiders to delight the most ardent entomologist. Relatively tight construction keeps these critters out of the office, but the airy nature of the observing floor is irresistible to them.

As an astrophotographer, I was somewhat reluctant to commit to a major backyard observatory in a suburban environment. The doghouse, however, showed me how enjoyable it is to observe on a whim, and this urged me to press on with my original plans rather than look for land far out in the country. Today CCD cameras and even digital processing of conventional photographs have greatly increased what can be done under a moderately light-polluted sky. And I continue to be amazed at how enjoyable observing can be when it takes only minutes to go from thinking about using a telescope to actually being at the eyepiece.

Do you provide plans for this observatory. I am think of building a raised observatory and would consider copying your design.

Dennis,
I have enjoyed your reviews and articles in Sky and Telescope, and I was wondering if you had a set of plans you provide for your observatory. I have a horsebarn I am converting into a woodshop, but I was thinking of attaching a raised observatory to the barn at one end. I have enough room to accommodate a roll-off roof. I liked what your did to isolate the telescope piers and believe it would be doable for me. Thanks