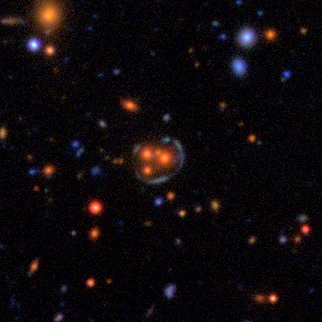 Humans are better than computers at spotting the warped, gravitationally lensed light from faraway galaxies, such as the "space warp" at the center of this image.

As predicted by Einstein’s general theory of relativity, massive galaxies and clusters of galaxies can act as gravitational lenses, strongly bending background light around them. If the alignment is just right, light from a faint, distant, background galaxy can be magnified so that its projected image on the sky is distorted to form bright arcs, rings, and sometimes even multiple images.

These space warps are not only visually stunning, they provide portals into the universe’s distant past, when galaxies were assembling. Normally, these distant galaxies are too faint and far away to be detected, but the gravitational lensing gives astronomers the opportunity to study these objects with ground- and space-based telescopes.

Space warps also provide crucial information about the structure of the large galaxy or cluster of galaxies serving as the gravitational lens. Astronomers can use the shapes and separations of the space warps to probe how the lens bends the light around it, in essence weighing the lens. This enables astronomers to determine how the mass is distributed within the lens galaxy or galaxy cluster, and map out where and how much luminous and dark matter there is.

Space warps are rare. Astronomers must survey large swaths of sky and examine a very large number of galaxies to find them. Automated computer algorithms are searching for these distorted galaxies in deep-sky images but are not good at finding all types of distorted shapes and images. Many space warps have probably escaped detection in these large astronomical datasets. That’s where you can help. The human brain can easily distinguish these beautiful and distorted space warps from normal galaxies. With Space Warps, you can hunt for these elusive astronomical gems in images from the 3.5-meter Canada-France-Hawaii Telescope’s Legacy Survey.

Explore Mars from Your Sofa

This spider morphology results from seasonal changes on Mars's surface.

Mars’s south pole is an exotic place. During the winter, carbon dioxide (CO2) gas freezes onto the surface. When spring arrives and the south pole is no longer in darkness, the exposed ice sheet begins to thaw. Beautiful dark seasonal fans and blotches begin to appear, increasing in number into the late spring. At the end of the southern summer, when the ice has fully disappeared, the fans and blotches vanish.

What forms these fans? Where do they go? Planetary scientists think that the springtime Sun heats the ground at the base of an ice sheet, vaporizing the CO2 ice from underneath. The trapped CO2 gas exploits cracks in the ice to break through to the surface, erupting as jets. This process is truly alien and unlike anything on Earth. The dirt and dust entrained in the escaping CO2 gas is blown by the local surface winds and deposited onto the surface of the ice sheet to produce the stunning dark fans seen from orbit. When the ice is gone, the particulates comprising the fans and blotches fall back onto the regolith and simply blend in.

The High Resolution Imaging Science Experiment (HiRSE) camera on NASA’s Mars Reconnaissance Orbiter has monitored the south pole’s seasonal thawing since 2006. With a spatial scale of about 30 cm per pixel, HiRISE can resolve features down to the size of a card table. HiRISE has captured thousands of fans over the past four Martian springs. The size, shape, and direction of these dark fans and blotches provide information on the Martian climate and wind direction. It’s difficult if not impossible for computer algorithms to accurately identify individual dark fans and blotches, but they are easily spotted by eye.

With Planet Four, you can explore Mars like never before from the comfort of home. Planet Four will produce a seasonal polar wind map on the surface of Mars and help scientists investigate how Mars’s climate varies from season to season and year to year.

Former Yale University astronomer and planetary scientist Meg Schwamb is now at the Institute of Astronomy and Astrophysics at Academia Sinica in Taiwan. As a member for the science team for Planet Hunters and Planet Four, she uses citizen-science results to explore how planets form and evolve.