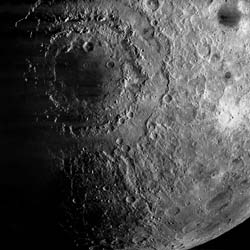 This Lunar Orbiter view shows Mare Orientale in its full glory. The dark circular patch in the upper right corner is the crater Grimaldi; click on the photo to see a large image with labeled features.

Spectacular Orientale is the youngest large basin on the Moon, but it's centered at 95° west longitude, just beyond the western limb of the Moon. Fortunately, favorable librations tip the Moon so that Orientale’s main rings and mare lava flows occasionally come into view. This time around the Orientale observing season begins in November 2004 and ends in March 2005 — the exact dates are listed at the bottom of this page. The prime time for viewing falls early in 2005 — from January 29th to February 2nd inclusive.

In fact, William K. Hartmann discovered the true multi-ring nature of the basin by examining Earth-based photographs projected onto a sphere. But we had to wait for the spectacular Lunar Orbiter photographs in 1967 (above) to appreciate the full glory of the Orientale basin. 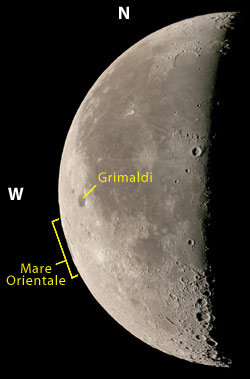 Orientale has two large concentric rims — the 930-kilometer-diameter Cordillera Mountains and 620-km-wide Rook Mountains. The Cordillera peaks rise 1.25 kilometers above the surrounding highlands, and the floor of Mare Orientale is about 6 km below the peaks. Thus, this vast hole — more than 900 km wide — is very shallow, with only 6 km of total relief.

The Cordillera Mountains, with their rugged massifs and a dramatic scarp, define Orientale’s outer ring. The next ring is made of more massifs and is called the Outer Rook Mountains. The dark mare lavas forming Lacus Veris leaked to the surface just inside the Outer Rooks, presumably along deep fractures associated with the basin ring formation. Encircled by the Outer Rooks is a diffuse collection of smaller mountains and hills that are generally thought to mark two additional rings. One of these, the Inner Rook ring, is relatively well defined, while the innermost, unnamed ring is only partially defined by the edge of Mare Orientale. 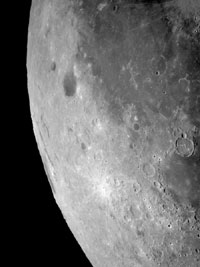 This scene, showing the western limb of the Moon, was acquired on the morning of September 30, 2002. Click on the image for a larger view that identifies Mare Orientale.

Finding Orientale should be straightforward. Simply look along the limb just to the south of the well-defined dark patch of the crater Grimaldi. The long strips of dark lavas making up the two lakes will confirm your sighting of Orientale. With a high Sun over the western limb the dark mare lava flows stand out distinctly against the bright crust. Lacus Autumni is a patch of mare just inside the northern part of the Cordillera Mountains, while Lacus Veris is a much longer ribbon of mare that follows the inside of the Outer Rook Mountains. When librations are very favorable, Mare Orientale itself can be seen bordered by a low white range: the Inner Rooks. Profile views of the Rooks and Cordillera Mountains are sometimes visible as bumps on the limb of the Moon.

The following dates all occur around the time of last-quarter Moon. You can find the time of moonrise for your observing site by entering the date, your location, and current time zone into our almanac.