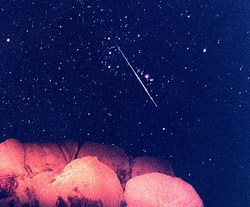 A bright Perseid meteor streaks past Orion's Sword early on the morning of August 12, 1997.

Meteor watching is easy. Anyone can go out in the early-morning hours, lie back in a lounge chair, and wait for the occasional shooting star.

It's a lot more fun, however, to record what you see in a scientific manner so you can join in the worldwide observing campaigns of the International Meteor Organization (IMO). Meteor studies have relied heavily on amateur observers for more than a century. They still do.

Many efforts in the past, however, floundered because of one big problem: the observers didn't acquire their data in a consistent way that made it useful. The number of meteors you see depends heavily on the amount of light pollution at your site, the altitude of the shower's radiant, the size of your unobstructed view, and other factors. These variables need to be recorded and controlled as well as possible, so that corrections can be applied to make everyone's counts intercomparable.

Since its founding in Belgium in 1988, the IMO has done an excellent job of standardizing this formerly disorganized field worldwide. Amateurs now have a professional-quality organization to set guidelines for observers, receive their data, reduce it, analyze it, and publish it rapidly.

The true measure of a meteor shower's intensity — the standard to which every observer's count is reduced — is the zenithal hourly rate, or ZHR. This is the number of meteors that a single observer would see per hour if the shower's radiant were at the zenith and the sky were dark enough for 6.5-magnitude stars to be visible to the naked eye.

A successful meteor campaign results in a "shower profile," a graph of ZHR versus time. If enough observers spaced around the globe can keep the shower under 24-hour watch for many days running, a full record can be made of all its activity. This in turn provides a cross-section of the meteoroid swarm in space — invaluable for studies of these closest, yet best hidden, pieces of the solar system.

But to create a good shower profile, one with small error bars, thousands or even tens of thousands of meteor observations are needed. So everyone who turns out and uses the methods described on the following pages will be filling a real need.

Where, When, and How to Watch

To observe meteors, all you really need to do is find a dark observing site with a wide-open view of the sky. Bring a reclining lawn chair, bundle up warmly, and lie back and watch the stars.

You don't need much gear. Bring a watch and a dim, red-filtered flashlight to read it by. You can make notes with a clipboard and pencil, but much better is a tape recorder with a microphone switch. This way you can dictate notes in the dark without taking your eyes off the sky. Cold-weather observers should keep the tape recorder inside their coat so it doesn't freeze up. Meteor vigils can get surprisingly cold, so it's wise to dress for the iciest depths of winter.

Bring a reclining lawn chair to a good, dark site with an open view of the sky. No trees or buildings should intrude into your view except maybe at the very edges. If you came from a brightly lit house, give your eyes at least 15 minutes to adjust to the dark. Settle in, look up, and relax. When you're ready to begin watching steadily, note the time to the nearest minute.

The simplest project is just to count the number of shower and non-shower meteors that you see. Watch the sky at least 50° up, and pick a direction away from the shower's radiant point. Keep your field of vision filled with sky. If obstructions do intrude they should block no more than 20 percent of your view, and you need to note the percent they cover. The same applies to clouds. Note the time whenever the amount of cloud obstruction changes, and if the total increases to more than 20 percent, take a break. When your data are reduced, an adjustment will be made for the fraction of your view that was blocked.

Once in a while a meteor will catch your eye. If its path, extended far enough backward, would cross the radiant point of the shower, note it as a shower meteor ("P" for Perseid, "L" for Leonid, and so on). You can note all other meteors simply as non-shower meteors (for example, "NP").

Noting your sky's limiting magnitude is essential if you want to make a meaningful meteor count. Check the visibility of stars in and around the Little Dipper (if you live at a northerly latitude) and find the visual magnitude of the faintest one you can see with the naked eye. Click on the chart for a larger image.

While gazing and waiting, you'll have plenty of time to find the limiting magnitude in the part of the sky you're watching. 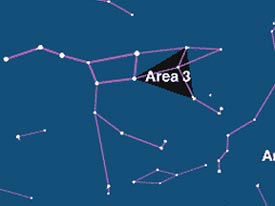 Pick one of the areas highlighted here (click on the chart to see more zones) and count how many stars you can see in it, including the corner stars. Then find what limiting magnitude (LM) this number corresponds to in the following table.

The IMO and the North American Meteor Network (NAMN) provide an easy way to do this. They supply charts of various constellations with faint stars labeled. Compare one of these charts with what you see in the sky to find your limiting magnitude. Or just use the chart above of the Little Dipper.

Another approach is to use the chart on the right. Find one of the highlighted areas and count how many stars you can see in it, including the corners. Take a little time and use peripheral vision, but don't push very hard; you want to characterize the ordinary state of your vision during the meteor watch. The table below then tells you the limiting magnitude (LM) that your star count corresponds to.

The limiting magnitude is an essential measure of your light pollution, sky clarity, and night vision. A meteor count is meaningless without it. Taking the average of several limiting-magnitude determinations will reduce random errors. Check again at least once an hour to track subtle changes in sky conditions, always noting the time. Even a small change has a big effect on the number of meteors you see.

Most observers like to take a break about once an hour to get up, move around, and open the coffee thermos. Note the beginning and end times of every break. If you're writing, also record how much time you spend looking down at your clipboard if this is more than a few percent of the total. Count how many seconds the job takes per meteor; you may be surprised at how much time it adds up to.

Even if you observe without a break, separate your records with a time annotation at least once an hour. A watch that beeps on the hour will help remind you. If rates suddenly begin to rise or fall, note the time more often. Also note down the part of the sky where you spend most of the time looking.

For simple meteor counting, that's about it. If you want to do a little more, however, the IMO strongly encourages you to estimate the magnitude of each meteor you see. Large numbers of magnitudes are required for finding a shower's "population index," or r, the ratio of bright meteors to faint ones. This, in turn, is required for calculating the zenithal hourly rates for everyone who watched under a less-than-perfect dark sky. Some comparison magnitudes can be found below.

Make your magnitude estimates by imagining these stars zipping across the sky, not by trying to sum up the total light along a meteor's path. For example, when estimating magnitudes for the Leonids, a typical notation might be "L, 2.5."

It's important not to combine your counts with anyone else's! If you watch with friends, each person should conduct his or her session strictly separately and submit a separate report. In fact, you should really be positioned far enough apart so that you can't tell when someone else makes a note. The problem is not the bright meteor that draws a yell out of everybody, but the faint, questionable one that you would dismiss as an eye twitch if you didn't hear someone start muttering into a tape recorder. Including it will make your count artificially high for your limiting magnitude. It helps to watch different parts of the sky.

Nor should you confer about the sky's limiting magnitude. Your own determination needs to go with your count. If one observer finds 5.4 and another 6.0, each person is right — for the purpose of reducing his or her count.

The Leonid shower normally continues at a rather low level for about a week. This profile shows the shower's average activity from 1988 through 1993; rates didn't pick up until 1994. Adapted from the IMO's journal, WGN, this graph is the fruit of 1,102 effective hours of meteor watching by 182 observers. During this time they recorded 2,697 Leonids. The more hours of observation, the shorter the error bars (blue) will be. Click on the chart for a larger view.

The next morning, when you tally your results, divide them into separate time periods about an hour long, giving the beginning and end to the nearest minute. Shorter periods are preferable if the radiant was low or the action changed significantly. For each period, total up the number of shower and non-shower meteors that you noted within it. If you estimated magnitudes, list the numbers of each type of meteor at each brightness level. Give the sky's average limiting magnitude during the period, the average percent of your view that was obstructed, and the amount of time lost to breaks and/or writing.

Both times and dates should be given in Universal Time. If you have any question about this, include your civil (clock) time and date, along with the time zone you are in, for clarification.

Also include your latitude and longitude to 1° or better (use a GPS receiver or find them on a map), the direction you were looking toward, and anything else relevant. The IMO urges observers to monitor the meteor showers for several nights before and after the predicted peak to help provide full coverage of the weeklong shower.

Reports can be sent to the IMO through its North American coordinator: Robert D. Lunsford, 1828 Cobblecreek St., Chula Vista, CA 91913-3917.

At Sky & Telescope we're always glad to see a copy of your report by e-mail or surface mail to Sky & Telescope, One Alewife Center, Suite 300B, Cambridge, MA 02140 USA, but please send your original to one of the addresses above.