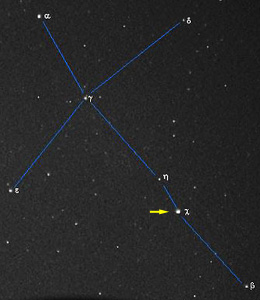 Cygnus as photographed in infrared light on August 6, 2006. Chi Cygni (arrowed) was the brightest star in the constellation at this wavelength, outshining even Deneb (top left). At visible wavelengths Chi was less bright, magnitude 3.8. (See Maurice Gavin's Infrared Constellations page.)

The red, Mira-type variable star Chi Cygni has a very unusual maximum. It's one of the brightest such variables to begin with (typically peaking at about magnitude 5.2), but in late July and early August 2006 it grew to about magnitude 3.8, according to many reports to the American Association of Variable Star Observers (AAVSO). Wrote John Bortle: "This would make the current maximum the brightest in 148 years."

As of September 7th it was on the way down, at about magnitude 4.8.

Chi (χ) Cygni is plain to see in the neck of Cygnus, the Swan, not far from Albireo, Beta (β) Cygni. It's near 4.0-magnitude Eta (η), which is 2½° farther down the neck away from Albireo. Eta is orange; Chi is a deeper orange-red. See the comparison-star chart in our earlier article on this star, or in the August Sky & Telescope, page 67.

Read more about variable stars and how to observe them in our variable-star section. And keep up with what other observers are reporting each night at the Chi Cygni page of the AAVSO. From the AAVSO site you can also get a wide-field comparison-star chart for estimating Chi Cygni's magnitude when it's at its very brightest.

I didn't found the wide-field comparison-star chart above mentioned. AAVSO present a resized chart, but the page is empty, white.
Please can You corret the item ?.
Many Thanks in advance and Best Regards
Ellepi.