Close-Up of an Alien World 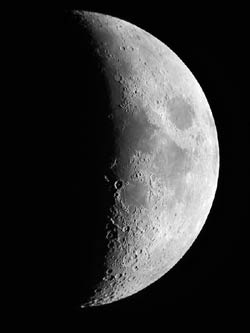 A crescent Moon is a visually pleasing combination of dark maria and bright, rugged lunar highlands. This is usually the lunar face that beginning observers first study as every month it's nicely placed in the sunset sky.

The Moon is one celestial object that lives up to expectations the first time it's seen in a telescope, and it never fails to impress even casual viewers. One evening I showed the first-quarter Moon in my 6-inch reflector to a visiting real-estate agent. She was flabbergasted by the sight. "How long have they known about this?" she asked. "About 350 years," I replied. "Well," she demanded, "why don't they tell anyone?"

Amateur astronomers tend to be much more jaded. Since the Apollo landings there has been a definite loss of interest in the Moon. It's as if Luna suddenly ceased to be an astronomical object once we walked on it. But of course the Moon is the same body it always was.

Even deep-space enthusiasts should consider it important to their subject, rather than just a bright nuisance, because it surely represents a standard type of world throughout the universe: an airless, geologically dead rockball covered with the impact craters of its formation and youth. If a 10,000-mile-aperture telescope giving sharp images at a billion power could be turned to the nearest stars, many planets coming into view would most likely resemble the Moon. So if a 3-inch telescope gives an equally good view of such a world close by, why not take advantage of it?

The lunar surface shows thousands of times more detail than anything else in the night sky, being over 100 times closer than the nearest planet ever gets. Its mean distance is hardly astronomical; 239,000 miles (382,400 kilometers) may be less than you've driven a car during its lifetime. Being so close, the Moon presents a landscape, not a skyscape. So it's fair to say there are really two types of observing: the Moon and everything else. 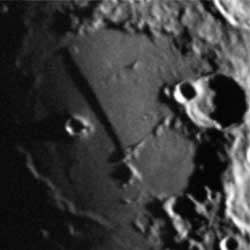 The dark line on the floor of Mare Nubium is the Straight Wall, discernible here only by the shadow it casts at sunrise. Click on the image to see the surround terrain including the craters Ptolemaeus, Alphonsus, and nearby Arzachel.

Most lunar observing is done near the terminator, for reasons that become clear with the first look through a telescope. Here the landscape is a tangle of bold detail — crags, canyons, and seemingly bottomless craters filled with black shadow ringed by brilliant sunlit walls. Farther into the bright disk, the land seems much smoother. In reality the Moon is not nearly as rugged as it looks near the terminator. The craggy mountains are usually just rolling hills, the black canyons shallow vales. The exaggeration of relief is due to the long, sharp shadows cast by every small irregularity when the Sun is low on the lunar horizon. Since the Moon has no atmosphere, the shadows are almost night black against the daylit land. The extreme contrast makes an overly strong impression on eyes that are used to Earth's softer lighting. But the features are certainly real, if amplified, and offer endless scope for exploring.

The view changes continually. As the terminator creeps from the Moon's east to west (which is west to east in an earthbound telescope's field of view), the shadows gradually alter and new features come into daylight or vanish into night. Sometimes changes can be detected in just a few minutes; an hour is enough to modify everything along the sunrise or sunset line. 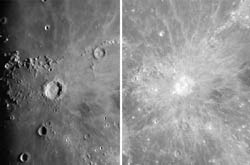 As the Sun climbs higher in the lunar sky, a once-familiar crater can take on an unusual appearance. The left image shows Copernicus just after local sunrise; the right image shows it with the Sun nearly overhead.

Away from the terminator, the Sun stands higher in the lunar sky. Here shadows are shorter and fewer, and the ground is much more brightly lit. A few bits of shadow can be found quite far into the Moon's day region, cast by the steepest hills and crater walls.

Still farther into the daylit hemisphere, the ground blazes under the high Sun like a desert at noon. The blinding glare tends to discourage observation of the low-contrast surface markings visible here. A neutral-density number 1 filter (10 percent transmission) reduces the light to a more comfortable level; a variable-density polarizing filter is still better. It may be hard to believe, but with an average reflectivity of only seven percent, the Moon is actually very dark gray — the same color as most moonrocks in museum displays. It appears white because anything sunlit would look bright at night.

Try to examine a feature every clear night for the two weeks from lunar sunrise to sunset. Every formation changes dramatically under different lighting. A crater may appear to be a deep, dark hole at sunrise, turn increasingly saucer-shaped as the Sun climbs the sky for the next few days, and show up as a flat white spot or ring at local noon. As the Sun declines in the lunar west the process is reversed, with shadows now being cast in the opposite direction. 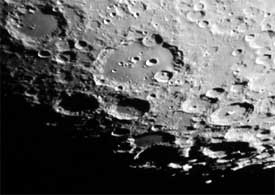 The southern portion of the Moon is heavily cratered. The largest crater in this image is Clavius, 132 miles (210 kilometers) across. Click on the image for a wider view of the region surrounding Clavius.

The Moon has two types of surface: highlands and maria. The highlands are mountainous, heavily cratered, and relatively lightcolored. They cover about two thirds of the Moon's visible face. The maria (the Latin plural of mare, "sea") are flat, darker-gray lava plains. The lava flows occurred after the rest of the surface had largely taken its present shape.

Craters are the Moon's trademark. Some 300,000 of them are at least one kilometer in diameter and hence resolvable in a 10-inch telescope. In the 19th century when their origin was a mystery, they were classed by size as walled plains, ring plains, craters, craterlets, and crater pits in descending order. We now know that nearly all of them have the same origin — meteorite impacts. Thus the term "crater" is often used to cover them all. Meanwhile the scale has been extended in both directions: to giant impact basins such as Mare Imbrium, and to microscopic pits found on grains of lunar sand. On all scales, meteorite bombardment is by far the most important factor that has shaped the lunar surface. 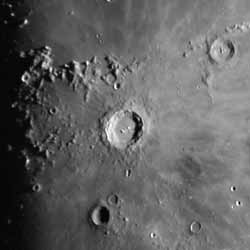 Prominently displayed on the face of the 9-day-old Moon, Copernicus dominates Oceanus Procellarum. It's typical crater features include a central peak, terraced walls, and ejecta visible as a system of rays when the Moon is full.

Many telescopic craters have prominent central peaks and terraced walls and are surrounded by ejecta blankets of matter thrown out when they were formed. Sometimes the ejecta extend for great distances in streaks or rays, best seen when the Sun is overhead and shadows are absent.

The relative ages of craters can often be told at a glance. Where one breaks the wall of another, the intruder obviously came later. Sometimes the order of five or six overlapping craters can be told this way. Those surrounded by rays or white spots are the youngest; lunar soil darkens under the impact of micrometeorites, so material exposed relatively recently is lighter. Flooded craters at the mare edges, and ghost rings of completely inundated craters, must clearly be older than the lava flows of the maria. Craters partially flooded by the mare lavas never show rays, but younger craters on the maria themselves often do. Even the youngest lunar features, it should be remembered, are many times older than most landforms on Earth. 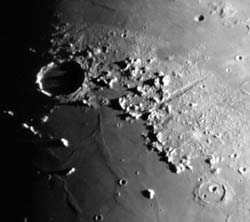 At the northern edge of Mare Imbrium stands the large crater Plato. To its right the Alpine Valley cuts through the Alps Mountains.

Mountain ranges tend to ring the great impact basins. Valleys are less common, since the water that erodes valleys on Earth has never existed here. Erosion does occur on the Moon's surface, but far more slowly and by the altogether different process of meteorite impacts. Over the aeons they pulverize the lunar soil, breaking down sharp edges and shaping the gently rolling landscapes of dust and crumbled rock that the Apollo astronauts found.

Rilles or clefts are long, narrow cracks in the surface, sometimes forming intricate patterns. At high powers, some rilles are seen to be crater chains, rows of pits that probably formed by subsidence of the ground. The Rheita Valley, for instance, is actually a chain of rather large depressions. Here is evidence that not all craters are formed by impacts. Occasionally — such as near Copernicus — there appear chains of secondary craters. These are dug by rocks flung out from larger impacts and are sometimes visibly associated with rays. 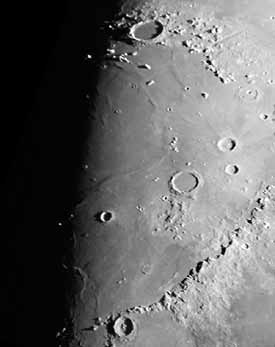 This sunrise view of Mare Imbrium and the crater Plato (top) reveals wrinkle ridges snaking across the floor of the mare.

Two features are seen only very near the terminator: wrinkle ridges, snaking for scores of miles across mare plains, and domes — low, blisterlike swellings on the maria, often capped by small craterlets. Domes are probably volcanic in origin, but their exact nature remains unknown.

This brief catalog only scratches the surface of what's to be seen any night on our companion world. Countless one-of-a-kind formations and freaks of lunar geology will become old friends to the regular Moon watcher equipped with a small telescope and a map. This is the easiest of all kinds of astronomical observing — there's no trouble finding the Moon! — so why not go out tonight and have a look at an alien world?