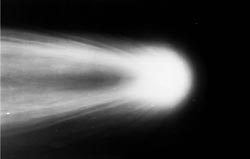 The seething nucleus of Halley’s Comet, as photographed on May 8, 1910, by the 60-inch telescope at Mount Wilson Observatory in California. During the comet’s return visit to the inner solar system in 1986, the Giotto spacecraft discovered that dust streaming away from the nucleus is rich in organic compounds.

Skywatchers often expect spectacular displays from meteor showers. But "normal" showers traditionally display only a few dozen meteors per hour. One of these, the Eta Aquariids, may not dazzle you with large numbers, this shower has one significant claim to fame: its particles come from the reigning king of comets, Halley.

Earth passes near the long, looping orbit of Comet Halley twice per year, and each approach peppers our atmosphere with dust strewn along Halley's orbit. Yet, despite their impressive lineage, the Eta Aquariids in May and the Orionids in October are not particularly well known. In fact, the Eta Aquariid shower remained unrecognized as such until the late 1800s.

Hints of a pulse of meteor activity at the end of April and in early May first arose in 1863, when Hubert A. Newton noticed a coincidence in the dates of a series of showers in historical records dating back to A.D. 401. But official credit for discovering the Eta Aquarids goes to English astronomer George Lyon Tupman. On the nights of April 30 and May 2, 1870, he observed more than two dozen meteors streaming from a radiant in north-central Aquarius. A year later Tupman again recorded a weak shower radiating from this location.

The Eta Aquariids remained poorly observed due to a lack of active meteor observers in the Southern Hemisphere. Only occasional hints of an active shower were reported, since northern observers had to face the beginnings of twilight shortly after the radiant rose above the eastern horizon. However, in 1876 Alexander Stewart Herschel deduced that on May 4th, when Comet Halley's orbit is closest to Earth, it should create a meteor radiant at right ascension 22h 28m, declination 0°. Herschel immediately noted that the radiants observed by Tupman in 1870 and 1871 were very near these predictions, and within a few years the link between Comet Halley and the Eta Aquariids was secure. Fortunately, several good meteor observers appeared in the Southern Hemisphere during the 1920s, and the knowledge of primarily southern meteor showers increased dramatically.

Beginning in 1947, the Eta Aquariids joined the ranks of the first streams to be detected by radar. From 1958 through 1967, the sensitive radar equipment at Springhill Meteor Observatory near Ottawa, Canada, detected hourly rates typically between 350 and 500 at the shower's peak.

As with most annual showers, this one exhibits year-to-year variations in intensity, and observers have noted unusual peaks and valleys in the activity of the related Orionids as well — undoubtedly due to Earth's encounter with denser filaments within the stream of particles along Halley's orbit. In 1962, for example, the radar-echo rates climbed to 328 per hour on May 2nd, only to drop to 133 the following day. By May 4th they had climbed back to 468.

In 1973 Anton Hajduk (Astronomical Institute of the Slovak Academy of Sciences) noted that the Eta Aquariids occur when Earth is 0.065 astronomical units (10 million kilometers) from Halley's orbit, presumably when the stream is most dense, while the Orionids occur when Earth is 0.15 a.u. (22 million km) away. Moreover, the Eta Aquariid stream has an orbit somewhat different from the one now occupied by Halley. Apparently these comet crumbs made their escape from the nucleus many centuries ago.